Humanity’s material progress and cultural development is made possible largely due to the freedom of people to initiate innovations that did not exist before and their freedom to buy and sell extra output and services produced by themselves and other people.

In short, economic freedom and freedom to trade are among the cornerstones of human progress. Remove this freedom and innovation and ingenuity will largely be curtailed and human misery and underdevelopment will result.

These are other related issues were tackled in the two-day Economic Freedom Network Asia (EFN Asia) Conferences 2015, here at Taj Tashi hotel in Thimpu, capital city of Bhutan. The event’s theme is “Economic freedom as a way to happiness” and the main sponsors are EFN Asia, QED Group, and the Friedrich Naumann Foundation for Freedom (FNF).

QED is a private, independent think tank and consulting firm based in Thimphu while FNF is a German political foundation tasked to help conduct economic and political education around the globe about the merits of classical liberalism, lean state, and increased market competition.

EFN Asia was born in 1998 during a conference in Manila discussing how more economic freedom and less government interventions could have anticipated and minimized the financial turmoil that occurred during the “Asian financial crisis” of 1997-1998. Since then, EFN Asia conferences are held yearly in different big cities in the region.

These and related questions are answered by the Economic Freedom of the World (EFW) annual reports, produced by Fraser Institute in Canada, in partnership with FNF (Germany).

The EFW is measured by getting the scores (0 to 10, zero is totally unfree and 10 is full economic freedom) of countries covered on five areas: (1) Size of government, (2) Legal system and property rights, (3) Sound money, (4) Freedom to trade internationally, and (5) Regulation.

The composite score for the five areas covered is generated and countries are ranked from highest to lowest. For Asia, here are some results. (See table) 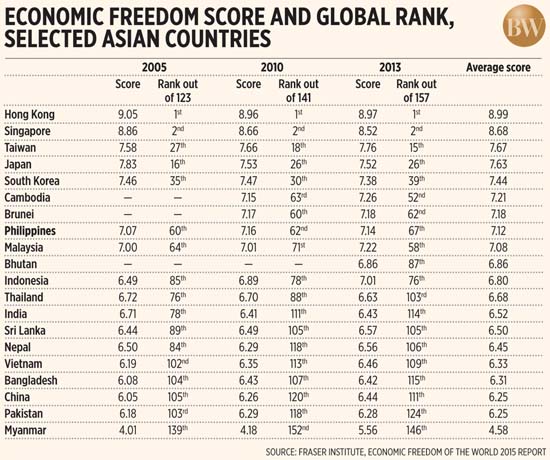 For many years now, Hong Kong and Singapore are recognized as the two freest economies in the world. They have small and few taxes, their governments enforce the rule of law, and protect property rights. Since they have low or zero import tariff, it is easy and less costly for their exporters and importers to buy and sell goods abroad, and so on. Taiwan, Japan, and South Korea try to follow these policies set by the two freest economies.

The Philippines has been ranking modestly in the 60th to 70th positions in the three years above. It gets high scores in area (1) as it does not have too many transfers and subsidies, have few government enterprises. But the Philippines gets low score in area (2) with scores of only 3 to 4 in sub-areas Judicial independence and impartial courts, other sub-areas.

That presents a big challenge for the Philippine government (and other Asian governments too) and civil society organizations -- nongovernment organizations, media, academe, professional organizations, church groups, and so on: Control or minimize corruption and bribery by having rule of law: the law applies equally; no one is exempted and no one can grant an exemption to penalties set by the laws.

Bienvenido S. Oplas, Jr. is the head of Minimal Government Thinkers, Inc., and a Fellow of the South East Asia Network for Development (SEANET). Both think tanks are members of EFN Asia.
-----------