Another civil society and volunteerism in action. Giving away one's own money, not other people's money collected by force.

"Mark Zuckerberg and his wife pledged to give away virtually all of their $46 billion in Facebook Inc. shares, setting a new philanthropic benchmark by committing their massive fortune to charitable causes while still in their early 30s.... promising to donate 99 percent of their stock in the social-networking company "during our lives." 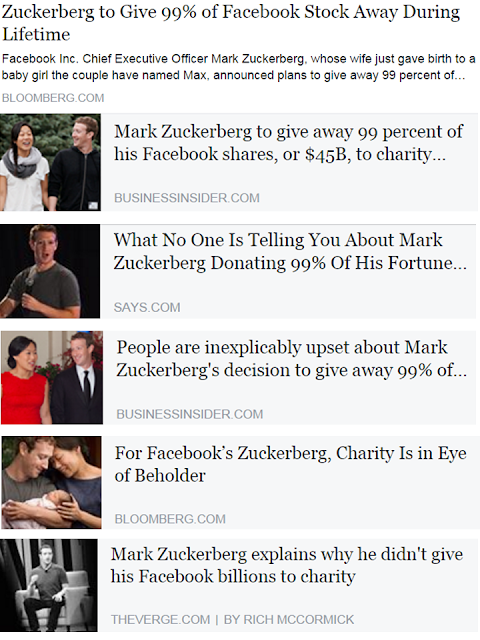 "Mark Zuckerberg announced Tuesday that he's giving away 99% of his Facebook shares — valued at $45 billion today —during his lifetime." http://www.businessinsider.com/mark-zuckerberg-giving...

So not entirely by next year or next 5 years. He plans to increase his wealth from the current $45B to perhaps $100B or $300B, then give away 99% of it. Maybe in 20 years. It's all about volunteerism, not coercion.

"Zuckerberg and Chan have already donated more than $1.6 billion to charity in the past decade, including a $100 million gift to the Newark Public School System, a $25 million donation to the CDC to stop the spread of Ebola, and a $120 million commitment to education in the Bay Area." -- from the BI article above.

So there is record already, gave even before announcing this new initiative.

This is a new phase of global capitalism. Those super-super rich, they see that governments are getting more bureaucratic, more coercive and even more stupid, they do not like how their huge tax money is being spent by those governments. So they spend and distribute their OWN money to see more meaningful results.

Politics of envy 2. All people, rich and middle class and poor alike, should be disempowered to do charity projects. Only the government, its politicians, legislators and officials/bureaucrats can be trusted. wow.

"It is all just a bad transfer of power from the state to billionaires. So it's not the state that determines what is good for the people, but rather the rich want to decide. That's a development that I find really bad. What legitimacy do these people have to decide where massive sums of money will flow?" http://www.businessinsider.com/mark-zuckerberg-skeptics...

Only government central planners can do real charity, wow.

“I applaud their emphasis on ‘promoting equality,’ but that starts with paying one’s taxes,” said Gabriel Zucman, an economics professor at the University of California, Berkeley. “A society where rich people decide for themselves how much taxes they pay and to what public goods they are willing to contribute is not a civilized society.”
http://www.bloomberg.com/.../for-facebook-s-zuckerberg...

"by using an LLC instead of a traditional foundation, we receive no tax benefit from transferring our shares to the Chan Zuckerberg Initiative, but we gain flexibility to execute our mission more effectively." Zuckerberg said that if his intentions were to avoid tax, he could've simply set up a charity. "If we transferred our shares to a traditional foundation," he wrote, "then we would have received an immediate tax benefit, but by using an LLC we do not. And just like everyone else, we will pay capital gains taxes when our shares are sold by the LLC."
http://www.theverge.com/.../mark-zuckerberg-explains...

He posted: "This enables us to pursue our mission by funding nonprofit organisations, making private investments and participating in policy debates — in each case with the goal of generating a positive impact in areas of great need.

Posted by Bienvenido Oplas Jr at 6:38 AM

Thank you so much Mark for sharing your blessings. Your beneficiaries will be so happy to have better facilities and equipment. They can feed more children and help them have better education. Thanks again Mark! You're an angel from above! God bless you always.

Nicolas / Charity Volunteer in the Philippines