Today, the ASEAN Economic Community (AEC), one of three pillars of the regional grouping, materializes. It further cements what has been initiated several decades ago, to have a single production base, a single market, moving towards a single rate of tariff (zero for member-states) and low rates for imports from non-ASEAN countries.

Despite bureaucratism that delays real free trade, the region and the rest of the world is generally marching towards global free trade.

I like this photo, colorful and it shows the cultural and national diversity among the people of the 10 member-countries.

ASEAN was created on August 08, 1967 in Bangkok, Thailand, with the signing of the ASEAN Declaration, 38 years ago. Here's the timeline of important events: 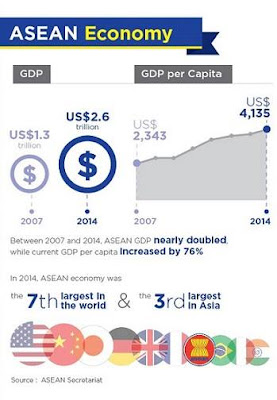 Some macroeconomic data of the region and its 10 member-countries.

Within seven years, both the overall GDP size and per capita GDP income has almost doubled.

Third largest economy in Asia, after China and Japan. 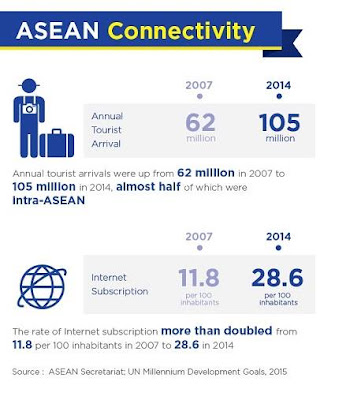 Another good set of data, connectivity in the region. Internet subscription has more than doubled within the past seven years, wow.

This is not to say "All Halleluiah" to the 10 governments of the association. Economic integration and free trade is the "default mode" of humanity if government trade regulations, protectionism and taxation is absent.

Nonetheless, compared to other regional  groupings and economic communities in Asia (say compared with South Asian countries) and other continents, the pace of trade liberalization and economic deregulation in the ASEAN is faster. Thus, credit be given when its due to member-governments.