The Philippines is the second largest archipelago in Asia-Pacific in terms of number of islands and islets, next to Indonesia. Air and sea travel therefore is very important for many inhabitants of different islands. Continued modernization of existing airports and seaports and the creation of new ones is a must. 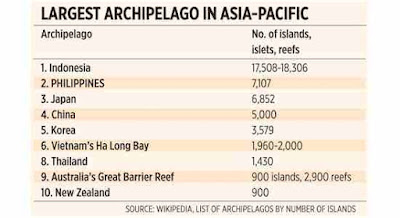 I traveled with my family last Sunday, Dec. 20 -- land trip from Makati to Iloilo via the Nautical highway. The route is as follows:

4. Boat -- Bulalacao to Caticlan, Aklan (3-6 hours, depending on the shipping line)

Batangas port, operated by the Philippine Ports Authority (PPA), was congested that day with vehicles going to Calapan, Oriental Mindoro. Inside the gate, there was another long queue of cars. Guards said there were many cars already queuing inside for all boats going to Calapan. Buses are given priority to board the boats. 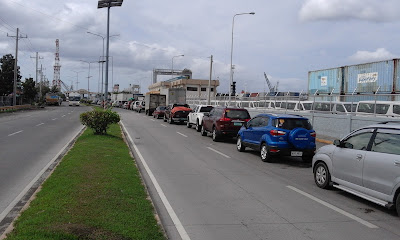 This photo shows the queue of vehicles planning to enter Batangas port to go to Calapan, Oriental Mindoro on Dec. 20.

After waiting for about 30 minutes in this area where the queue was hardly moving, I decided to go to Mindoro via Puerto Galera as there was no queue for vehicles.

Before loading the car to a roll on, roll off boat going to Puerto Galera, a friend who is working at Fast Cat shipping line called me and said that he can accommodate us in their next boat which is bigger, faster and more modern.

Another staff of Fast Cat said that their boat which left 12 noon for Calapan was not full and that they could have accommodated up to 10 cars more so he wondered why the guards held up so many cars at the gate saying that boats for Calapan were already full.

The Fast Cat boat was supposed to leave Batangas at 2:30 p.m. but it arrived late. When the boat was already full with vehicles and passengers, the boat was not allowed to leave with standing passengers because authorities wanted everyone to be seated.

It seems a suspicious decision because all the buses that came were full and have many standing passengers in them as this is the holiday season. Helpless to argue with the coast guard, the crew asked the excess passengers to go back to their buses. We then finally left Batangas port at almost 4 p.m., a few hours delayed. My friend commented that the coast guard does not or seldom implement strict rules on older shipping lines.

It was already evening when we arrived Calapan. Many parts of the city, the surrounding municipalities were dark, some areas looked eerie. The destruction of the recent strong typhoon were still evident -- lots of fallen and uprooted big trees, fallen or leaning electrical posts, many houses destroyed, dark roads and standing houses. 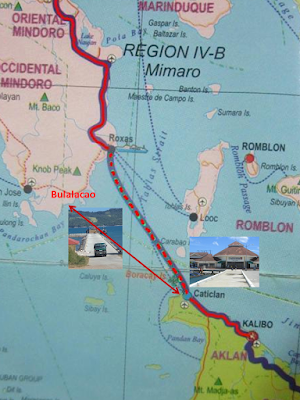 The main and old port that serve the boats plying the Mindoro-Aklan route is in the town of Roxas. About three shipping lines use this port and are always congested. I did not go there; I tried to catch the past-10 p.m. boat at Bulalacao port, about 50 km further south of Roxas and is geographically closer to Caticlan. (See map)

Bulalacao is the last town of Oriental Mindoro in the south; next to it is San Jose, the capital of Occidental Mindoro. The road from Roxas to Bulalacao was surprisingly very smooth and modern. I did not expect to see such smooth road when it’s far from the capital, Calapan.

Bulalacao port is very basic -- no passenger terminal, only the boat anchored and vehicles entering it. The shipping line’s ticket office, PPA and coast guard stations are in a temporary structure at the gate. Since this is a new and lesser known port, there are not too many vehicles that board here. The bureaucracy and inspections are minimal.

As a result of the trip, I have learned several lessons and have come up with possible policy reform suggestions.

1 The PPA seems to remain inefficient in handling or facilitating big volume of vehicles that come to Batangas port during the holiday season. The case of long queue at the gate of cars going to Calapan was inconsistent with the fact that at least one boat departed with many vacant slots.

2 Could it be the PPA’s guards deliberately held up many cars so that one shipping line will have less revenues, then allow the cars to come in for the other shipping lines to earn bigger revenues?

3 The coast guard also practiced typical bureaucratic behavior at Batangas port. Having standing passengers inside the boat at this season is expected as all the buses that come in have excess, standing passengers in them. Besides, the weather was fine, no signs or forecast of big waves or weather disturbances affecting the route.

4 The Philippines is an archipelago and many people rely on inter-island shipping for their mobility. Government authorities should become more passenger-friendly, business-friendly, and not impose unnecessary prohibitions and regulations that slow down the mobility of goods and people.

Bienvenido S. Oplas, Jr. is the head of Minimal Government Thinkers, and a Fellow of the South East Asia Network for Development (SEANET).
-----------

That was a very long trip, Sir! We tried that route once but only up to Caticlan.