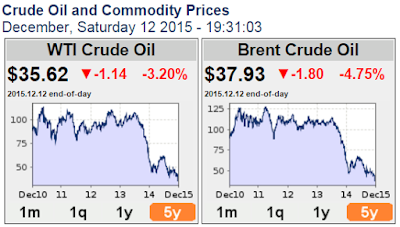 Some oil products other than WTI and Brent are actually cheaper than these. Like Western Canada, Iraq heavy, etc. 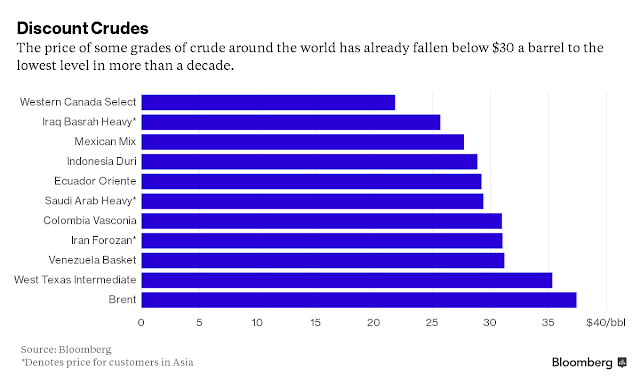 Many of the tens of thousands of planet saviours and climate hangers who went to the UNFCCC COP 21 meeting in Paris who hate fossil fuel may be shivering with this development. They want the world to cut petroleum use while they do their frequent jet-setting global meetings and junkets on airplanes that fly and cars that run on petroleum.

They will dislike that there will be more trucks, more buses, more cars, more planes, more ships that move more people and goods across cities, islands, countries and continents, as oil prices keep falling.

The animal rights activists should welcome this development too. Millions of cows, carabaos, horses, other big animals will be spared of heavy and punishing farm work as it is cheaper and faster to use more tractors and machines than those animals.

The old, tested greed by OPEC member-governments have been shattered by heavy competition from shale gas/oil drillers and producers in the US, Canada, etc. Before, whenever oil prices fall down, OPEC would quickly cut their output from 30 M barrels per day (bpd) to around 29 M bpd. Now they cannot and will not do that. They are forced to keep producing at 30-31 M bpd, accept low prices and lower revenues, just to keep their market share.

The rest of us, oil consumers around the world, benefit from this global competition among oil and gas producers. In the Philippines, the minor Peso/$ depreciation contributed to small price rollback. Besides, the $35 per barrel is for 1 or 2 months delivery, meaning by January or February 2016, not December 2015.

Peak oil, along with peak food and Malthusian hypothesis, climate alarmism, discredited. The short- and medium-term scenario is that world oil prices will hover between $40-$60, still low compared to 2012-2013 levels of nearly $100. And lower than the past decade's prices.

We are in a period of cheaper energy, cheaper food, longer lifespan, healthier people. The problem of many economies now is more fat/obese people than thin and undernourished people. When people die at 50 or 60 yrs old, some would say, "he/she died young". In 1900, when a person dies at 40 or 50 yrs old, that's "long" already because life expectancy was only around 33 years.

So few decades from now, if a person dies at 70-80 yrs old, other people will say, "he/she died young." Why, because average life expectancy then will be at around 100, 110 yrs old.

Regulated fares and the LTFRB

But why despite oil and fuel prices going down, public vehicles in the Philippines do not automatically bring down their fares?  When fuel prices go up, PUV operators and drivers ask for a fare hike again.

The Land Transport Franchising Regulatory Board (LTFRB) of the DOTC is a jerk government agency. MARINA (regulator for shipping companies and operators) and CAB (regulator for airlines) allow fare deregulation. So airlines' fares can go up or down depending on the travel season. The LTFRB officials, past and present, are among the hard-core central planning bureaucrats. No fares can go up or down unless they give permits, unless they affix their signatures. 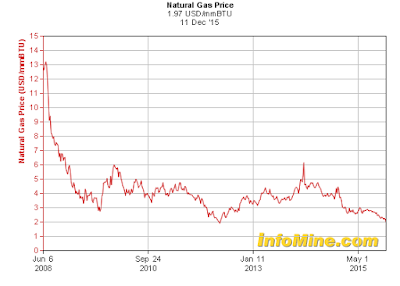 And world coal prices too. Since the Paris climate agreement is non-binding, no penalties for countries that do not obey their promised emission cuts, then more developing countries like India, China, Indonesia, Philippines, Brazil, etc. will be using this energy source to further empower their economy. Rich countries too like Japan and the US. Prices chart over the last 14 years. 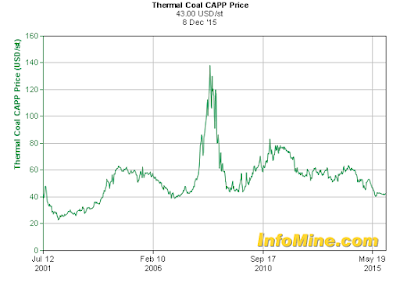 Global capitalist competition will spring us more surprises, for the better. There are lots of shale gas/oil rigs that have been temporarily closed because of low prices. But there are lots more shale oil and gas deposits around. More global prosperity is the game.
Yes, cheap energy prices can contribute to deflation or declining overall prices of commodities and services. But it will be a good type of deflation. More output per unit of input. In this case, more oil, more natural gas, per rig.


There is a distinction between good and bad deflation. The good is productivity-driven (cheap oil, cheaper mobile phones and flat tv, cheaper food and shoes, etc.). The bad deflation is due to poor economic outlook in the future (people seldom spend even if they have the money).

There is little role for governments in this type of deflation, and they should not intervene more, like imposing higher petroleum taxes. The WB and IMF have been lobbying for this tax hike for sometime now. They believe that petroleum being a "public bad" should be taxed more. Nehh? Those WB, IMF, UN, other multilaterals' officials and bureaucrats love to jet-set and travel a lot, on petroleum-powered planes and SUVs, meaning it is useful for them, then declare petroleum as a "public bad"?
------------