I am reposting these two papers below, published this week in Kuala Lumpur. The first is a well-written piece (as usual) by a good friend, the second is a press statement by IDEAS. The image I got from the web and just added here. 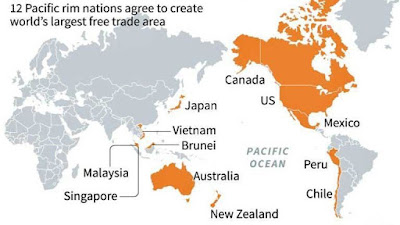 (1) Be wary of anti-TPP ideologues

I am usually very keen to take part in discussions about the benefits and challenges of trade liberalisation.

The Trans-Pacific Partner­­ship (TPP) agreement is one of the steps towards further li­­beralisation and I have been taking part in many events with those who oppose it lately.

But I am losing steam very fast and I have been asking myself many times if it is actual­ly worth the effort to debate the TPP cri­tics.

The anti-TPP activists have been campaigning for many years. I remember reading some material from them back in mid-2013.

In other words, when they started campaigning against it, they did not even know what it is.

To make it easier to understand, let’s turn that into a political analogy. If someone comes to you and says that Party A is bad news, a rational person would react by asking for the evidence.

If the only evidence is based on hearsay and assumptions, it is very likely that the person is talking from ideology and sentiment instead of rational thinking. It is also likely that he is a supporter of Party B trying to badmouth Party A.

That is exactly what has happened to the TPP. If anyone pretended to know the content of the TPP before Oct 5, he was either a bomoh or an ideological activist.

There is no other way to explain the pretentious behaviour of claiming to know something that was not even released yet at that time.

The reality is, those who have been campaigning against the TPP are mostly ideolo­gical anti-liberalisation activists. They be­­lieve that a paternalistic government must protect us forever because we will never grow up as strong adults.

Their opposition to liberalisation is driven by the ideological belief that Malaysians are too weak and too stupid, and therefore, they as the clever ones, must protect us from competition.

Over the last few months I did try to engage with some of them. But I found them impossible to engage with because they jump from one point to another without any desire to take in answers to the issues they complain about.

And they will dismiss any answer you provide, accusing you of not knowing enough because only they have the superior ability to grasp complex issues.

They usually start by saying the TPP was negotiated in secret and therefore it must be bad. It does not matter how many times you explain to them that it is normal practice to negotiate the final deal before making it public.

They are not interested in the answer and before you know it, they would jump to a dozen more complaints, all of which are plucked from the Internet way before the true text is released.

If you tell them that the complaints are not in the actual text, they will say it may not be in now, but there is no guarantee it cannot be inserted in the future.

How do you talk to someone who refuses to accept the fact but is very quick at bringing into the conversation all future possibilities? Since there is no guarantee that driving a car is safe, should we ban all cars?

The main point here is that their opposition is driven by blind anti-liberalisation ideology. It does not matter that two cost benefit analyses have been released to say that the TPP would bring many benefits to the rakyat.

They would scramble to find faults with the studies, and I wouldn’t be surprised if they will soon accuse the two studies as biased just so that they can ignore the data and stick to their own opinions.

When it comes to ideology, data and facts are irrelevant.

Having said that, some of the complaints against the TPP deserve to be analysed further.

There are concerns about the potential impact of the extended copyright and patent protection on pricing of the protected items. Many parties have expressed concern about the potential risks behind the investor-state dispute settlement mechanism (ISDS), the government’s ability to conduct public health measures, impact on labour rights, domination of big powers especially the United States, and so on.

The concerns should indeed be addressed by our Government. The rakyat deserves to be told the real picture.

Unfortunately, and I choose my words carefully here, the Government has been very lousy at providing explanations on these issues.

After five years of negotiation, we see today a Government that seems to be clueless how to conduct the necessary public education exercise.

All the burden seems to be placed on Datuk Seri Mustapa Mohamed and his Ministry of International Trade and Industry. This is wrong because the TPP was negotia­ted by the Government as a whole, involving 16 agencies.

By right they should work together and pool resources to educate the public.

But we only see silence from almost all the other agencies. In fact some, including go­vernment-linked companies that were represented in the negotiation, are publicly hinting that the TPP should be rejected even though they were involved at the negotiation stage.

If this is not incoherence, should we call it irresponsibility?

Kuala Lumpur, 7 December 2015 – The results of the two cost benefit analyses on Malaysia’s participation in the Trans-Pacific Partnership conducted by the Institute of Strategic and International Studies (ISIS) and PriceWaterhouseCoopers (PWC) were released last week.

“Making an informed decision about Malaysia’s participation in the TPP requires a systematic and rational approach utilising the best possible evidence and analyses,” stated Wan Saiful Wan Jan, IDEAS Chief Executive Officer. “These two reports allow our parliamentarians, decision makers and civil society stakeholders to get answers on their concerns and then to make informed decisions.”

Wan Saiful added that: “I am glad that both reports did not play down the many concerns raised by various parties about the TPP. The fact that the two studies concluded that Malaysia would, overall, benefit from joining the TPP validate what we have been saying all along that liberalisation is good for the rakyat.”

“I want to emphasise that the government needs to get their act together to inform the public about the benefits of this trade agreement. So far it has done a lousy job at explaining the TPP despite having five years of negotiating it. It is unacceptable that the burden is piled on MITI alone, while other ministers behave as if they are unconnected to the process. All the ministries involved need to speak up as one government and there must be a coherent strategy to communicate with the public.”

“At the same time, I am worried about those who oppose the TPP because they have been unduly influenced by anti-liberalisation activists. These activists will oppose the TPP even when studies say it is good. They have been opposing it for years, before reading the actual text of the agreement or digesting the conclusions from the two studies. Even now, they will continue to oppose it regardless of these recent developments.”

“It is shocking how much coverage these anti-liberalisation activists have received and how many people have been influenced by their scare tactics. I expect that they will now be scrambling to find faults and attempt to discredit the two studies in order to save the little credibility that they have left. We must not be fooled and allow ourselves to be terrified. I urge everyone to read the two studies and decide based on the facts. We must ignore made-up accusations thrown by those who are driven by ideology rather than facts.”

“On the other hand, the two cost benefit analyses documented that Malaysia has obtained various exemptions and carve outs from the TPP, such as in the areas of Bumiputera policies and GLCs. I understand the short term political needs for these exemptions. But from the perspective of the longer term welfare of the rakyat, these exemptions will blunt the full benefits of the TPP. It would mean that Malaysia will not gain the maximum benefit from this round of liberalisation,” said Wan Saiful.
------------