Never fails. Less rain or more rain or no rain, less flood or more flood or no flood, less storms or more storms or no storm, they are ALL proof of "man-made" warming and climate change. tsk tsk tsk.

In the recent heavy flooding in the UK, some officials blame "man-made" global warming (GW) and climate change (CC), not their policies that discourage regular dredging of silted rivers. From another heavy flooding just two years ago, they have an idea already that their existing flood defence system was insufficient, meaning they can anticipate another round of heavy flooding, yet they conveniently blame "man-made" CC. Why not also blame "nature-made" CC so they can plan and act more realistically, rather than alarmingly.

(1) “Climate change is forcing England to re-assess its flood defences in the face of unprecedented river level surges, one of the United Kingdom government’s most senior environment officials says.

“We are moving from a period of known extremes into a period of unknown extremes,” said David Rooke, deputy chief executive of the UK government’s Environment Agency, which manages the country’s rivers. “We will need to re-assess all the defences right across the country.”
http://www.smh.com.au/world/unprecedented-flooding-in-britain-prompts-renewed-discussion-about-climate-change-20151228-glw0lw.html

(2) "Two years ago, the south of England experienced its wettest period for almost 250 years as tidal surges battered East Anglia, threatening the country’s most productive farmland. Flimsy silt and clay flood defences, at least 50 years old and fast deteriorating, proved no match for the forces of nature." http://www.theguardian.com/.../threat-climate-change...

(3) "* PM suggested greater frequency of 'extreme weather events' was to blame
* Liz Truss, the environment secretary, said rainfall was 'unprecedented'
* Simon Danczuk accused ministers of 'hiding behind' climate change issue
* Ministers reduced funding on defences before severe flooding in Cumbria a year ago forced them to reverse the cuts"
http://www.dailymail.co.uk/.../David-Cameron-says-climate...

(4) "There is no “EU River Management Official” whom ordinary people can vote out of office. While there is an elected European Parliament, the parliament is virtually toothless – it has no real oversight powers, and no power to source new legislation. All new laws are proposed by a soviet style central committee, the European Commission, which also has responsibility for overseeing implementation of the laws." http://wattsupwiththat.com/.../british-officials-blame.../

(5) "DAVID Cameron has sparked outrage by blaming Britain’s flood crisis on global warming while admitting defences are not fit for purpose.

However experts branded his comments “ludicrous excuses” blaming lack of investment on flood defences for the disaster and pointed to historic flooding which pre-dated global warming.

They accused the Prime Minister of deflecting attention away from accusations Britain is woefully unprepared for severe weather." http://www.express.co.uk/.../Historic-weather-records...

(6) "‘Heavily modified waters’, which include rivers dredged or embanked to prevent flooding, cannot, by definition, ever satisfy the terms of the directive. So, in order to comply with the obligations imposed on us by the EU we had to stop dredging and embanking and allow rivers to ‘re-connect with their floodplains’, as the currently fashionable jargon has it." https://notalotofpeopleknowthat.wordpress.com/.../what.../ 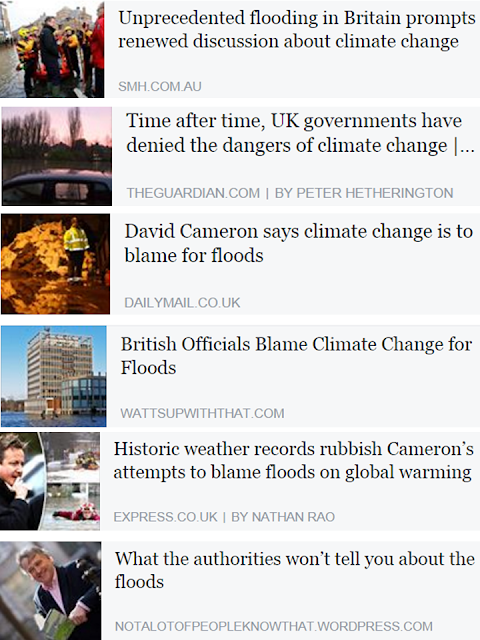 Because people are expecting or been fooled by the UN of "more warming" of 2C or 3C or higher, they cannot prepare for global cooling. The UN (and Al Gore, and di Caprio, and WWF, Greenpeace,...) is very shrewd to announce that no rain/drought or more rain/flood, are both proof of "man-made" warming/CC.

A friend, Todd Foster, commented,
“As I always ask the non scientists that tend to make up the government class, what is your plan, how much is it to cost, and what would it have done about this flood? Seriously, the reason the failed political class of Britain is blaming something they can't control is that they cut funding for something they could control...flood control projects. And why not? It's not as if a low information population will ever demand better of it's political class.”

The same here in the PH. Yearly, many municipalities in Bulacan and Pampanga provinces are heavily flooded, until about last week. Why, the rivers are heavily silted with lahar that continue to flow down from Mt. Pinatubo, and will continue for the next 20 years or more. But the PH government would rather spend on maintaining a CCC bureaucracy, sending many climate, environment, science, Malacanang and other officialsm to various UN and related global and regional climate meetings, climate conferences, etc. Instead of spending the money to do huge, large-scale and continuing dredging of these heavily-silted rivers and creeks. Some municipal governments in Bulacan spend big money raising the roads, up to 1 meter high.

So readers, find the difference between these 2 statements:

1. "Less flood or more flood or no flood, they are proof of 'man-made' warming and climate change and hence, government must send more money to favored renewables, to climate officials, to the UN,..."

2. "Mr. X has less money or more money or no money, it is proof that he is poor and hence, government must subsidize him and his family (more CCT, free PhilHealth & medicines, free education & books,...)."

As always, “man-made” or anthopogenic GW/CC is a big excuse and alibi for more environmental and energy regulations, more and bigger governments, bigger UN, bigger multilaterals and foreign aid.

So this movement cannot and will not accept that GW and CC is natural and cyclical, that it is "nature-made", largely or entirely. GW and CC should be "man-made" so that "man-made" solutions and regulations can be imposed.