"Peak food" or "more global hunger" and related hypothesis or conspiracy theories. And they remain as conspiracies, spreading and alarmism. Here's a good observation and chart from Dr. Spencer, January 29th, 2015,

“food production is not limited by available land…it depends upon demand. If demand rises, so does food production. Hunger, malnourishment, and starvation are not due to a lack of food. They are almost always due to governmental policies which hinder farming or hinder the prosperity needed to import food….” 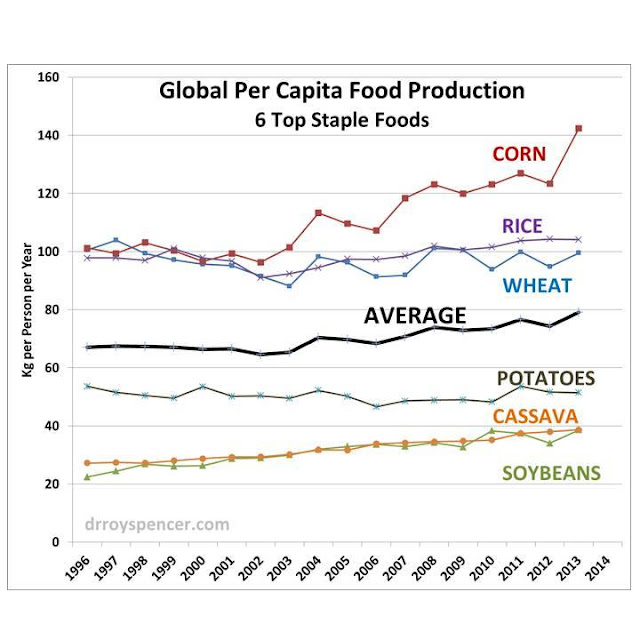 A world of rising... famine, or abundance? There is more food per capita now, and more in the future. The prophets of doom and alarmism may consider findinng other more useful jobs. Also from Dr. Spencer, March 18th, 2014.

“Here in the U.S, as well as globally, grain production as well as yields (in bushels per acre) have been on an upward linear trend for at least 50 years, primarily due to improvements in varieties (e.g. with greater drought tolerance) and growing practices.” 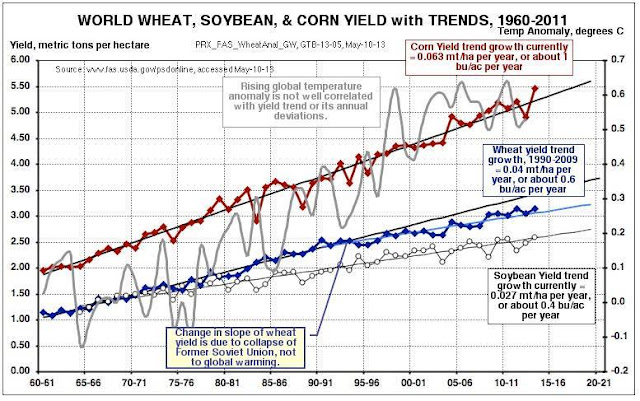 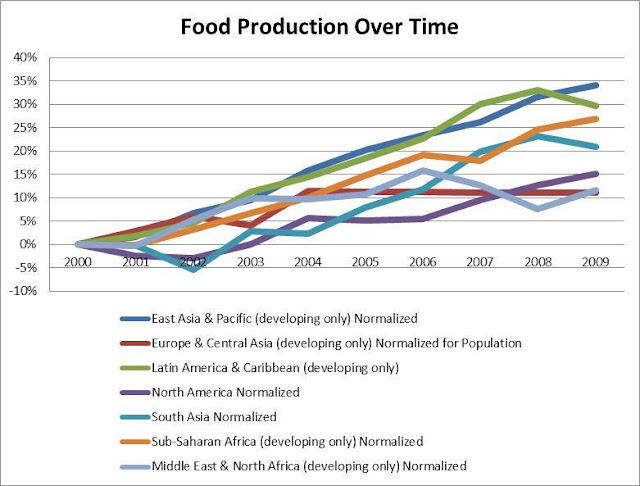 In Asia, they are steadily rising except in Afghanistan, Bhutan and North Korea.
Data is from Table 6, Global Food Policy Report 2014-2015, by the International Food Policy Research Institute (IFPRI). The figures are even more impressive, much larger in some MidEast countries than those in Asia proper. Note the numbers for Israel, Egypt, Bahrain and Lebanon. 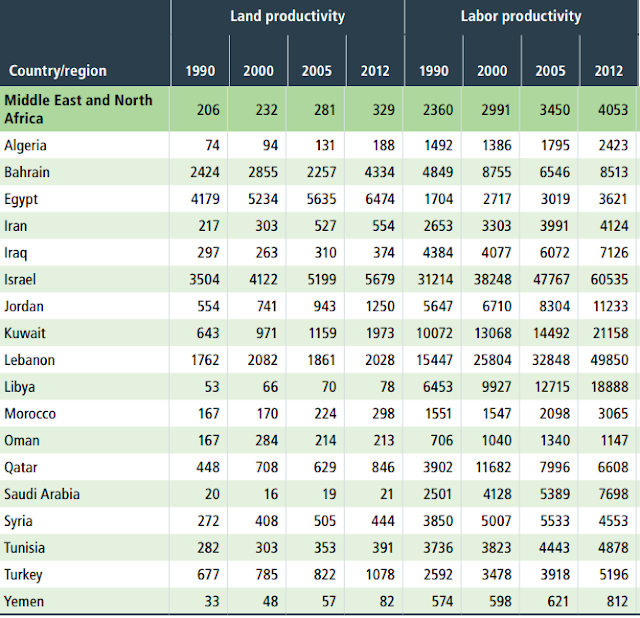 Some reports and articles.

Just as Paul Ehrlich’s 1968 bestseller The Population Bomb predicted that millions would die due to food shortages in the 1970s and 1980s, the article in 2015 tries to capture readers’ interest through unfounded fear. Let’s take a look at the actual state of global food production." May 26, 2015. http://fee.org/.../capitalism-defused-the-population-bomb

(2) "For the first time, the world is eating more fish from farms than from the open sea, spurring billions of dollars of takeovers as one of the largest food companies seeks to capitalize on rising demand.

Fish consumption is growing at a faster pace than beef, pork and poultry, driven by an expanding, increasingly prosperous global population that recognizes the health benefits of eating seafood. Demand is forecast by United Nations to outstrip supply in coming years. Wild fish aren’t going to fill the gap, and that leaves farming in lakes and coastal waters -- also known as aquaculture -- to make up the shortfall." http://www.bloomberg.com/.../hungry-fish-farms-lure...

(3) "The future of food is not bleak, as Liu suggests and mainstream media agrees, the future of food looks fantastic. Since the 1970s American farmers, who embrace science more than any in the world, have grown more food on less land in a way 1970s projections believed was only science-fiction.  If Europe and the developing world embraced science the way American agriculture does, not only could we grow the same food we have right now, we could let farmland equivalent to the entire region of Amazonia go back to nature and not lose a single carrot." http://www.science20.com/science_20/no_we_have_not_reached_peak_food-152734

(4) "Between 1990–92 and 2014–16, despite a global population increase of 35% (or 1.9 billion), the population suffering from chronic hunger declined by 216 million. Consequently malnutrition also declined. Since reductions in hunger and malnutrition are the first steps to better public health, age-adjusted mortality rates have declined and life expectancy has increased." -- Indur Goklany, July 6, 2015, http://wattsupwiththat.com/2015/07/06/have-fossil-fuels-diminished-the-worlds-sustainability-and-resilience/ 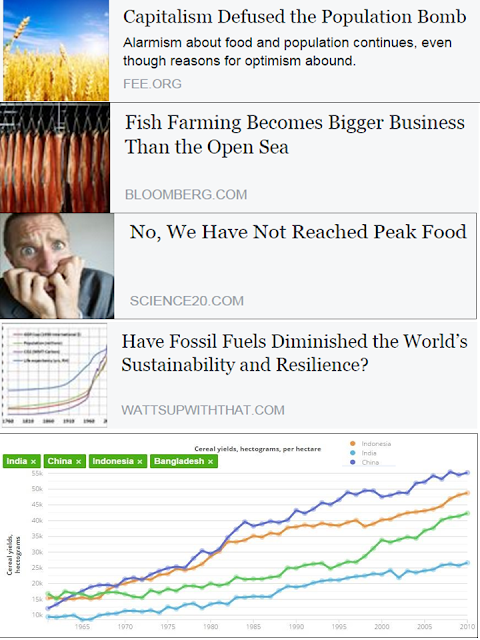 (5) From human progress. I chose the four most populous countries in Asia -- China, India, Indonesia and Bangladesh. http://humanprogress.org/.../Bangla.../China/India/Indonesia

Yes, we have entered the period of rising productivity and prosperity. Governments and NGOs of alarmism should step back from more regulations and interventions in various innovations in food production, storage, marketing and distribution. Innovation and competition among players, big and small, plus civil society volunteerism can address problems in distribution to the most vulnerable  and  poorest sections of  the population.
-----------