My previous article in BWorld on Solar power and supply instability attracted various comments from friends and strangers.

A socialist friend posted my article in his fb page, because they hate capitalism and fossil fuels. One of his anti-fossil fuel friends made long comments criticizing my paper. When I came in and asked for his charts and numbers, at first he sustained his statements but later chickened out.

Here's the chart and numbers that probably made him realize that subsidize-renewables lobby is standing on a weak ground. 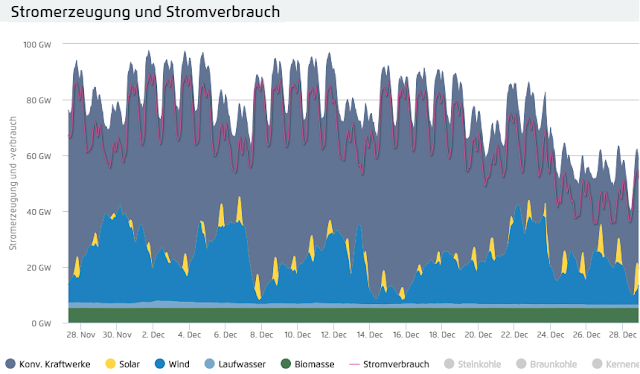 Look at the chart for the past 30 days, actual electricity production in Germany until early morning today December 28. Those yellow blips producing up to 10 GW and running only for a few hours a day.

Fantastic output? Nope, lousy.
And the German energy consumers pay a lot of subsidies for solar and wind.

The more useful and reliable renewables for Germany are hydro and biomass, the bottom 2 in the chart. For the PH, it is big hydro and geothermal.

From what I read once, Poland, France, others want Germany to be removed even  partially from  the European grid. Why? surges from their wind power. When  there is a surge in wind output as they have high wind installation capacity, Germany cannot absorb all output, so they export the huge surplus energy to the European grid,  and this causes huge instability in their system, courting possible brownouts due to high supply relative to demand.

One solution of Germany is to tell some of those wind farms to stop producing electricity, and still get paid. So Germany's feed in act or FIT is weird. They even pay for electricity not produced or killed when  there is a surge, whereas here, the FIT applies only on electricity actually produced by the new renewables.

Lesson: governments should get out intervening too much on energy pricing and giving out subsidies.

I also got a comment from one reader. This was published by BWorld under the Feedback section last week.
-----------

I liked your article in today’s paper about the problems with solar power.

Ironically the Star published also today an article about the solar plant at SM North EDSA which you mentioned in your article. It states in there that the 1.5 MW solar plant will provide enough power to “energize 1000 households” . That is a gross exaggeration! At a capacity factor of 15% which reflects the Philippine true weather conditions and given an average power consumption of 2560 Kwh per year for a typical Philippine household this plant would provide at best power for only 32 households if it could supply baseload.

In don’t understand the hype and misleading reports about the benefits of solar. It may be a different story if you have desert climate conditions like in Southern California or the Middle East where solar under an all-year-round clear sky can reach capacity factors of 25% and merchant solar plants can feed their intermittent supply to a large grid. None of these conditions exist here in the Philippines.

You mentioned in your article the often very short interruptions which occur within minutes. The industry calls that “Power-Swings” . The other day a heard a speaker at a congress who reported that unless one has huge warehouse-like battery storage facility, which can buffer these power swings, our fairly small capacity grids cannot absorb these swings and will automatically shut down. Very scary.

As a German Citizen I am of course proud of the accomplishment we have achieved in terms of RE. In the enclosed presentation which I gave at a Energy Forum you can see that the total power generated from RE sources was 152 GWh in 2013. That is double the power output of the entire Philippine in that same year!

But solar is playing only a limited role in Germany. Aside from wind it is biomass which is the backbone of German RE sources. A total of 7.800 small biogas plants all over the country with a total capacity 3800 MW are generating 29 GWh per year while the Philippines power output as a total is 74 GWh per year. According to a study from the USAid the Philippines have organic feedstock potential for a total of biomass/biogas output of 4,450 MW! That is the equivalent of 10 coal power plants!

Anyway I believe that the solar  industry will soon learn a hard lesson and will realize that its application on an island nation like the Philippines will be limited.