BWorld 32, RCEP and TPP for the Philippines

The Association of Southeast Asian Nations (ASEAN) Economic Community (AEC) will take shape by Dec. 31, or just three weeks from now. The 10 ASEAN member states will be more integrated regionally to become one single production base, movement of most goods will become unhampered with zero tariff, except for a few goods that are subject to some tariffs and import quotas, and various nontariff barriers.

Professionals and highly-skilled individuals will also be able to move more freely. Some people fear that this will mean “invasion” by other professionals of their generally niche markets reserved generally for the locals (aka local monopolies). But they should also look it as an opportunity for them to reach out and expand their businesses, services, and consultancies to our neighbors in the region.

Now there are two “mega” free trade agreements or areas (FTAs) that are being prepared for the Philippines and few other countries in the region. They are called “mega” because of the hugeness in both consumers or population size, and economic or gross domestic product (GDP) size.

One is the Regional Comprehensive Economic Partnership (RCEP) and it is composed of 16 countries: the ASEAN-10 plus six partner economies that regularly attend the annual ASEAN Summit. The six partners are the giant economies of North and South Asia, China, Japan, South Korea, and India. Plus Australia and New Zealand.

RCEP is not a new initiative, it has been planned since about a decade ago but we do not hear or read it often because the AEC and Trans-Pacific Partnership (TPP) tend to dominate the news. It is supposed to materialize this month too, but some hurdles have come in, but it is expected to become a reality within the next two years.

The other mega FTA is the TPP and it is composed of 12 countries: five from North and South America (US, Canada, Mexico, Peru and Chile), four from ASEAN (Malaysia, Singapore, Vietnam, Brunei) and Japan, Australia and New Zealand.

From the original four members (Brunei, Singapore, New Zealand, and Chile) that constituted the Trans-Pacific Strategic Economic Partnership Agreement, it was joined by eight other countries, later expanded to 12, and the group started to be called TPP in 2008. The TPP Agreement was signed only last month, and each member country must ratify it before it will be implemented. This will take about two years or by 2017.

Here are the relevant data on population and economic size of the two mega FTAs. (See Table) 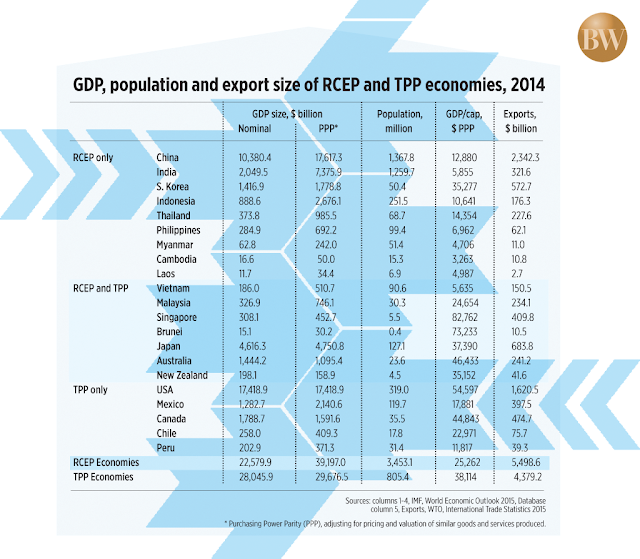 People are not only consumers, they are also producers, as entrepreneurs and workers; as manufacturers and sellers. So a bigger population is a bigger consumer and production base especially if the population’s skills keep improving.

And in terms of merchandise exports, RCEP is larger than TPP. Note that China’s exports are larger than the combined exports of US and Canada.

Taking the three factors together -- GDP size, population and exports -- membership in both is better than membership in “either” or just one. Thus, the four ASEAN economies are lucky to belong to both RCEP and TPP. Various NTBs, hidden from the public but are felt by exporters and traders are imposed by many countries, developed and developing. By being a member of either or both mega FTAs, these NTBs are significantly relaxed and hence, there is greater market access for these four ASEAN countries to those giant economies in North Asia and North America.

The decision of the Philippine government to join the TPP in the next round of membership expansion is wise and correct.

The US will remain to be the most innovative huge economy in the planet for the next decade or two. It is important that the Philippines can gain greater market access to it. Fears of the application of strict intellectual property rights in copyright and patents of newly-invented medicines and vaccines are based more on alarmism than reality as reflected in the actual texts of the TPP Agreement. This will be tackled in a future paper of this column.

Regardless of the rhetorics against free trade, many people and consumers in the planet want more choices, more options, more freedom in choosing where they want to buy and sell various products and services. Governments, in turn, are swayed by the preferences of their citizens.

Bienvenido S. Oplas, Jr. is a Fellow of the South East Asia Network for Development (SEANET) and President of Minimal Government Thinkers. Both are members of the Economic Freedom Network (EFN) Asia. minimalgovernment@gmail.com
-----------

Posted by Bienvenido Oplas Jr at 12:55 AM