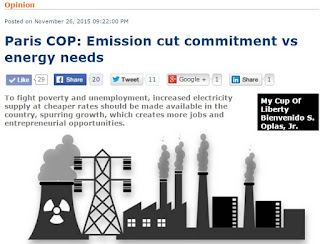 
To fight poverty and unemployment, increased electricity supply at cheaper rates should be made available in the country, spurring growth, which creates more jobs and entrepreneurial opportunities.

High poverty incidence and darkness kill people. They are more exposed to dangerous informal sector work, criminals and robbers lurking in dark corners, more prone to road accidents due to dimly-lit streets roads, more prone to fires due to frequent use of candles.

Thus, the 21st Conference of the Parties (COP) in Paris this coming Nov. 30 to Dec. 11 should not be used to hamper or even kill cheaper and reliable electricity sources in the future.

“The Philippines intends to undertake GHG (greenhouse gas; CO2) emissions reduction of about 70% by 2030 relative to its [business as usual] scenario of 2000-2030. Reduction of CO2 emissions will come from energy, transport, waste, forestry and industry sectors. The mitigation contribution is conditioned on the extent of financial resources, including technology development & transfer, and capacity building, that will be made available to the Philippines.”

In an Oct. 2 BusinessWorld report, “Philippines makes conditional offer to cut emissions by 70%,” it said:

“If fully implemented, the Philippines’ carbon emissions should drop 70 percent by 2030 from 2000 levels, said Lucille Sering, head of the country’s Climate Change Commission.”

And in another report, CCC Deputy and Assistant Secretary Joyceline A. Goco said that their initial estimates showed that the Philippines would need around $12 billion to $15 billion in support to achieve its intended nationally determined contributions.

The basis for such ambitious and unrealistic commitment rests on questionable, if not wrong scientific data. There was global warming in the past century coinciding with the rise in CO2 emission from human activities and modernization, true. But there was also global warming during the Medieval Warm Period and the Roman Warm Period, when there was not even bicycles during that time.

The current big El Niño that affects the Philippines and other countries in the tropics is true, we can expect drought conditions in the dry months of December-May.

But to say that it is the “Godzilla” of El Niño, the biggest and warmest of all time as reported in many papers, is not true. The big El Niño in 1997-98 was more severe than the current one. (See chart) 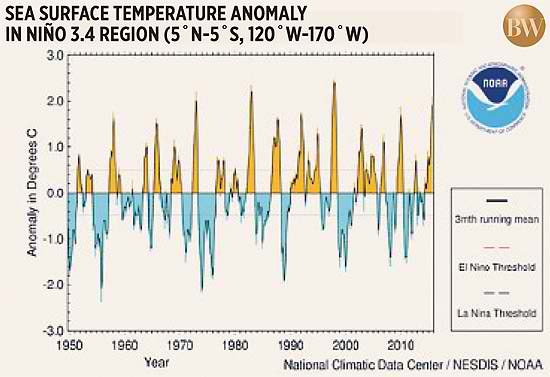 Meanwhile, following are the numbers for electricity production in big Asian economies. Not included in the list are Asian economies with low electricity consumption, or those which consume less than 30 billion kilowatt-hours (kWh) like Afghanistan, Bhutan, Brunei, Cambodia, Laos, Mongolia, Myanmar, Nepal, and Sri Lanka.

The sources and distribution of such electricity output per country is also given. The table is divided into two parts: those countries which have 90% or more of their total electricity production coming from fossil fuel sources, and those below 90%. (See Table 1) 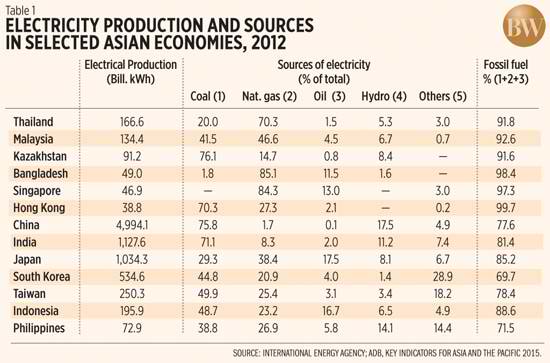 Our four more developed Asian neighbors -- Thailand, Malaysia, Singapore and Hong Kong -- have fossil fuel dependence of 92% to 100%. They can attract more manufacturing and other industrial players; more hotels, financial institutions and malls because they have stable, reliable and more affordable electricity supply. And they create more high value jobs to their economies, and that partly explains why their people have generally escaped from poverty and high unemployment.

For other Asian countries with less than 90% dependence on fossil fuels, their big hydro power and nuclear power have filled up the gap. For instance, production of nuclear power in million tons oil equivalent (mtoe) in 2012 were as follows: S. Korea with 34 mtoe, China with 22 mtoe, Taiwan with 9 mtoe, India with 7 mtoe.

There is a need to further expand energy production in the Philippines, make the supply of electricity more abundant and the price to go down and more stable.

Today is a good opportunity to expand power generation capacity from conventional sources -- coal, liquefied natural gas and oil (West Texas Intermediate) and coal. Their prices have been declining since the past few years. (See Table 2) 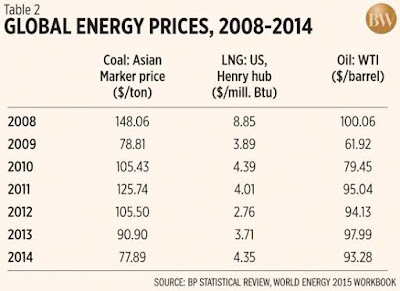 More electricity supply at cheaper prices is a must to sustain the fast growth of the Philippine economy. This is more evident in many industries that are electricity-intensive like manufacturing, hotels and business process outsourcing that are open almost 24/7.

It is doubtful that the CCC’s target of 70% cut in carbon emission by 2030, 70% from 2000 level, has any realistic basis, even if the targeted $15 billion of climate money is given to the country. It seems that the reduced emission target was taken with little considerations for the electricity needs of the country.

Bienvenido S. Oplas, Jr. is the head of Minimal Government Thinkers, Inc. and a Fellow of the South East Asia Network for Development (SEANET).
------------