Tourism provides income and creates jobs for many economies in the world. Singapore, for instance, attracts foreign visitors two times its population size while Hong Kong gets visitors four times the number of its residents.

The Philippines, being detached from the Asian mainland and an archipelago, does not get enough foreign visitors compared to its neighbors in the region. Thus, while one can take land transportation from Thailand to Cambodia, Laos, and Vietnam, or from Malaysia to Singapore, it cannot be done in the Philippines. One needs to fly from Manila to other exotic islands and famous beach resorts like Boracay, Bohol, Cebu, Palawan, Davao and so on. 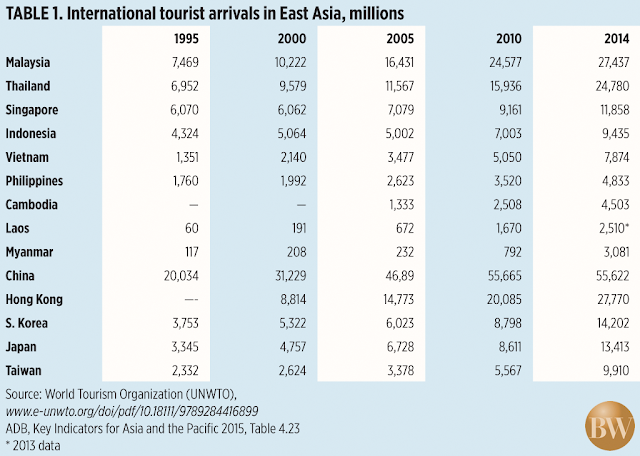 In terms of spending by foreign visitors and returning Filipinos already based abroad, the Philippines received nearly $4.8 billion in 2014. It is not as big as what Malaysia, Thailand, Singapore and other neighbors receive but it is twice what the country earned a decade ago. (See Table 2) 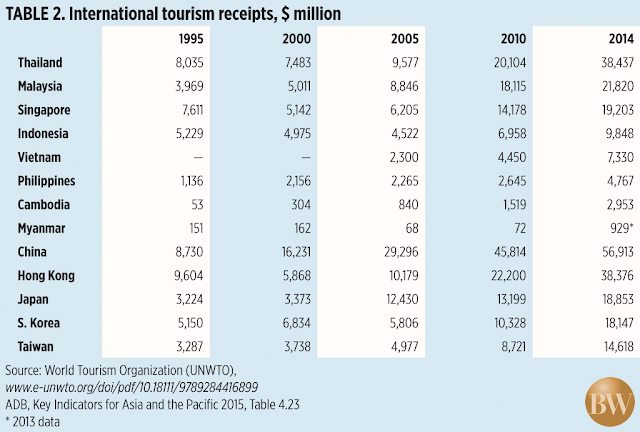 Since we aim to attract more foreign visitors and guests, it is important that infrastructure and logistical support are simple and provide convenience to our visitors and returning Filipinos, especially frequent travellers.

The airport transfer at the Ninoy Aquino International Airport (NAIA) to different destinations is generally very inconvenient and time consuming, especially with the on-going construction of skyways near and around the four terminals.

Take the case of VJ, a Filipino expat for most of his professional life who has been living in Singapore for three years now. His work takes him to the entire Southeast Asian region, traveling at least 25% of his time. He can fill one passport with stamps in an average of 1.5-2 years.

VJ flies from Singapore to Manila once or twice a month, both for work and personal travel. At NAIA, he would normally take the yellow airport taxi, whose rate is higher than regular taxis. Despite forking out extra for the same service, VJ prefers the yellow cabs since the cars are in better shape and the drivers are more professional.

Recently, the queue for the yellow cab has been longer than usual, taking passengers one and a half hours before they get a ride.

Another option is to take the “Bayan ko” flat rate white cabs. They cost more but at least the queue is more manageable, that is, if cars are around. Typically, a trip from NAIA3 to Ortigas for a yellow cab is around P275 and around double that amount for the white, flat rate taxi.

With the frequent heavy traffic around the airport, even queueing to get white cabs takes 30-45 minutes.

Last Nov. 6 when VJ flew back home, he was ready to take the white cab but saw that the line was extended, thinking that it would take him one and a half hours to get a ride.

One lady asked him if he wanted a quick ride to Ortigas, it would cost him P1,550, triple the price of the more expensive white, flat-rate cabs.

Another lady approached him and offered a ride to the same destination for P1,250. Because he was very tired, he took the bait.

The lady took him to Bay 1 of Terminal 3 and a white sport utility vehicle hurriedly picked him up. An airport policeman or traffic enforcer later hailed the vehicle but they were let go after a quick conversation with the driver. The driver told VJ that the policeman is the father of one of the female barkers. The driver then stopped and talked to one of the barkers, telling her that he will “take care” of the enforcer later or words to that effect.

VJ is familiar with all the other airports in Southeast Asia and swears that they are devoid of this kind of taxi scam. He tried Uber before with good experience but for some reason, its signal is weak in NAIA3, or they may have been blocked, or Uber cars refuse to ply NAIA3.

Among the quick and convenient airport transfer for passengers would be different aircon buses or vans that will take passengers from terminals 1-3 to Makati, Ortigas, Cubao, Manila, Alabang, and so on. Passengers can get off at major hotels or take the ordinary taxi from those business districts. This will significantly reduce the number of cars that go in and out of the airport and hence, smoothen traffic flow.

If complicated, politicized, and bureaucratic franchising system is not a factor, private players can easily field these buses or vans and give faster and cheaper transportation for the passengers. But there could be heavy politics and opposition lobbying at the Land Transport and Franchising Regulatory Board and the Manila International Airport Authority as this new scheme will adversely affect the taxi duopoly (yellow and white/flat rate) and the third, “taxidap” scheme at the airport.

If this taxi duopoly plus taxidap scheme are kept for a long time, then the Philippines will not get more foreign visitors as these horrendous experience will be factored in by the tourists. It is safe to assume that Cambodia and Myanmar will overtake the Philippines in attracting more tourists by 2016 (see Table 1 again), if not this year.