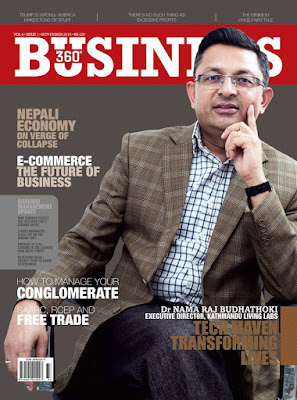 Free trade is beautiful. A seller decides the price that he/she thinks will optimize the sale of goods and/or services. A buyer comes and if he/she thinks the price is commensurate to the quality, he/she gets it, or walks away to find another seller who will give him/her good value for money. Things happen voluntarily, little or no coercion involved. Trade can happen only if it benefits both parties and hence, public welfare is served.

Elevate the scene at the international or  global level and the same principle happens. Trade can happen only if it benefits both the sellers and consumers overall. Otherwise, there  is temporary “market failure” where supply does not need demand or vice versa, until market solution involving new pricing and product/service quality comes in.

These FTAs and EPAs are not exactly “free trade” deals because there are still so many preconditions and protectionist measures involved. With human and economic  evolution through time, member-countries of such FTAs are moving towards real free trade in  the future.

SAARC was formed to promote peace, stability, progress and economic cooperation in the region. Among the mechanisms to attain this goal is the establishment of the South Asia Free Trade Area (SAFTA) where traded goods among member-countries will have zero customs duties by 2016. 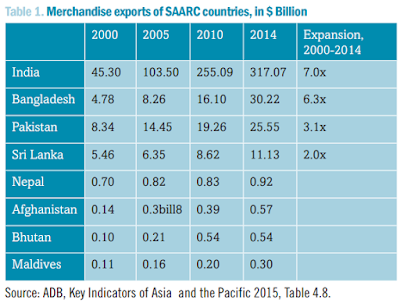 The 5th column, exports expansion over the past 14 years, is not part of the ADB report and is added only in this paper.

There is a huge disparity in trade performance in the association as two countries have expanded their exports more than six times (6x) while four countries were still unable to  export more than $1 billion in 2014. 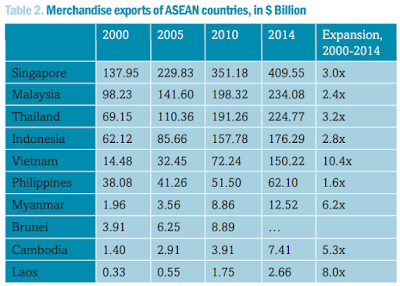 The creation of the ASEAN Economic Community (AEC) by end-December 2015, zero export duties among member-states, will be a huge market market of around 620+ million people, slightly higher than the combined population of the US + EU.

Table 3. Merchandise exports of the 6 ASEAN partners in RCEP, in $ Billion

It may sound ironic that socialist governments in China and Vietnam were able to maximize their integration with global capitalism that they experienced exports expansion of 10x and 9x respectively, in just 14 years.

Some national laws and taxes like gross sales tax (GST) or value added tax (VAT) can distort a free trade policy. For instance in the Philippines, while most imported goods are levied with zero to three percent import duties, they are slapped with 12 percent VAT and that immediately raises the price of previously cheap imports. Lots of oil smuggling in the country for instance, is done not so much to avoid the one or three percent import duties for oil products, but to avoid the 12 percent VAT.

Asian people may consider the policy of unilateral trade liberalization over the long-term. Trade with no political preconditions, no prolonged trade negotiations and disputes. Such policy has been practiced by some dynamic economies like Hong Kong and Singapore.
All goods are allowed at zero tariff, except for a few regulated items like guns, bombs, poisonous substances, fake medicines, disease-tainted meat products, and so on.

We are far from that ideal trade policy, so we have to live with the reality of continued intervention by governments in trade like SAFTA, AFTA  and RCEP. These trade alliances are better than economic nationalism and protectionism.