Of the 5 declared and serious Presidential candidates for the PH elections in May 2016, Davao City Mayor Rodrigo Duterte is the most controversial, most drama-filled, most sensational.

Why? These headlines today in major newspapers in Manila are self-explanatory. 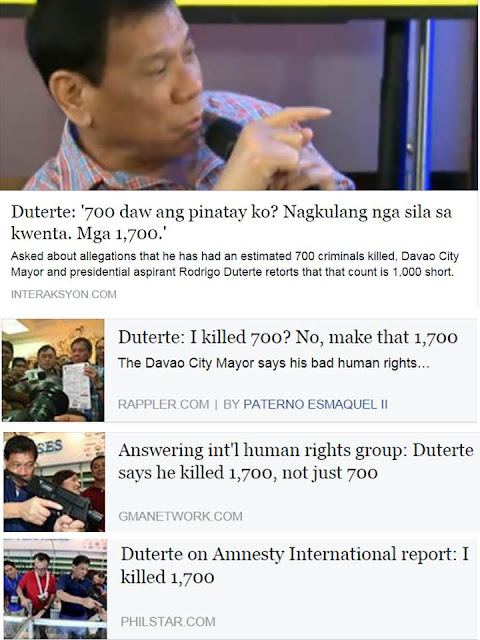 standard bearer is a self-confessed murderer of 1,700 people. Even if it's a joke, it's a shameless joke.

The man is laughing at the claimed 700 murders, small time daw. He publicly, explicitly, categorically brags that he and his death squads have killed 1,700. For me, only a sick mind would do that, publicly announcing and bragging that he has killed such a big number of people with zero trial.

About his good public health program, these are two different things. To be falsely accused, then zero trial with 100% bragging of summary execution, that's horrible. If he must brag, then he must brag about his performance in public healthcare, it should be fine. NOT with the number of people he has killed. Not counted here are those killed by his death squad, the families of victims who are too scared to complain or sue the Mayor fearing that they could be the 1,800th or 2,000th victims.

It is repugnant to see justifications by Duterte supporters that such large-scale murders are ok. To hell with investigation of allegations, just kill and kill. By the hundreds, by the thousands. If one of their friends or relatives was among those 1,700 dead people, falsely accused with zero trial, just outrightly murdered, I don't know if they would still support such large-scale murders.

I think Duterte has reached the stage or mental level of deriving joy from killing people. Kill few guys here, have some welfare programs to minimize public backlash. Then kill again a dozen there, another papogi programs. And kill more. Zero trial with 100% bragging.

Good luck to Duterte supporters. A person who has acquired the joy and satisfaction of summary murders, zero trial and zero fear of accountability, will have a larger field of joy and happiness when he becomes President. Killing fields beyond Davao, what a joy. Kill dozens or hundreds in Cebu, in Negros, in Samar, in Camarines, in Cagayan, in Isabela, in Metro Manila. Kill and kill. What a joy.


Dragging Mar Roxas, Jojo Binay, Miriam Santiago, etc. here is a secondary or non-issue. The main issue is the penchant for large-scale murders by a Presidential candidate and publicly bragging it. Corruption is everywhere, drugs are everywhere, so there will be deaths and killings and murders everywhere when Duterte wins. No more trial, no more correctional for these people, especially petty criminals who may have sold 1 gram of marijuana. They just deserve instant death from Duterte and his men. wow.

Shame on you, Duterte.