The main irony of climate alarmism is this.

This is repeated yearly in all the past Conference of Parties (COP) meetings by member-governments of the UN Framework Convention on Climate Change (FCCC).

Negotiators from 195 nations are haggling in Paris over a planned universal accord to slash greenhouse-gas emissions that trap the Sun's heat, warming Earth's surface and oceans and disrupting its delicate climate system.”
http://www.abs-cbnnews.com/world/12/04/15/un-climate-talks-turn-hostile-over-money 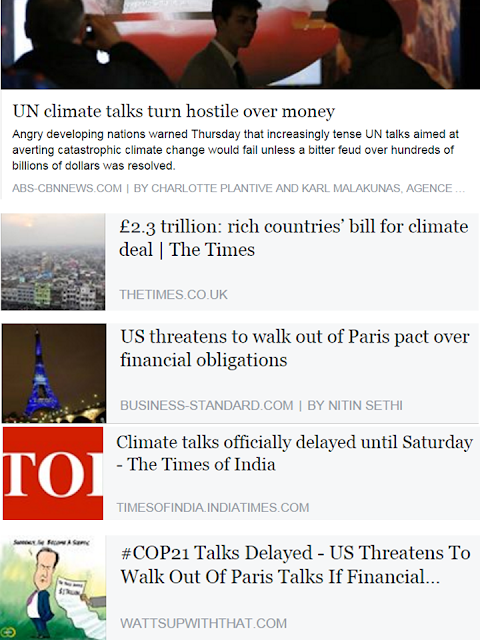 "Britain and other rich countries face demands for $3.5 trillion (£2.3 trillion) in payments to developing nations to secure a deal in Paris to curb global warming. Developing countries have added a clause to the latest draft of the text under which they would be paid the “full costs” of meeting plans to cut emissions." http://www.thetimes.co.uk/tto/environment/article4637269.ece

ISSUES THAT HAVE DELAYED AGREEMENT
Should developed countries have a legal obligation to pay for climate change
Should developing countries, that do not have historical responsibility for emissions, also contribute to the fund
Should burden-sharing be based on current economic capabilities or a combination of historical emissions and current economic capabilities
Should the actions of developing countries be linked to the provision of finance and technology or should they be treated at par with developed countries going forward
Should there be a periodic review of delivery of finance and technology by developed world or not
Should the long-term goal be to keep global temperature rise below 1.5 degree by the turn of the century or should it be somewhere between 1.5 degree and 2 degrees
Should poor and vulnerable countries continue to hold the right to file for damages against permanent loss caused to them because of climate change.
http://www.business-standard.com/article/current-affairs/us-threatens-to-walk-out-of-paris-pact-over-financial-obligations-115121100913_1.html

"Reacting to second version of the draft, Adriano Campolina, ActionAid Chief Executive, said, "In the closing hours of the Paris talks we have been presented with a draft deal that denies the world justice.

"By including a clause for no future claim of compensation and liability, the US has ensured people suffering from the disastrous impacts of climate change will never be able to seek the justice owed to them." http://timesofindia.indiatimes.com/.../50136956.cms...

Irony/hypocrisy 3: many planet saviours hate nuclear power, then they go to France, enjoy uninterrupted electricity while France is the #1 nuke-dependent country in the planet. In 2013, 76% of its total electricity output came from nuke. 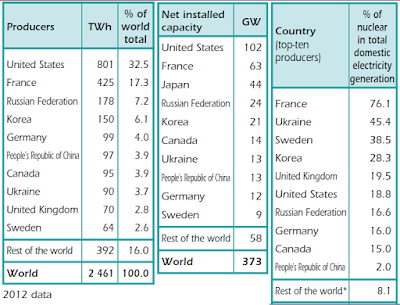 The planet is fine, it does not need self-proclaimed "planet saviours" and just undergoing the old and tested climate cycle of warming-cooling-warming-cooling, endlessly, with or without humans and their SUVs.

The planet's inhabitants though need to be spared and saved from those climate charlatans whose goal in spreading climate alarmism is more government, more global ecological and energy central planning. Alarmism now simply digs its own contradictions and problems.