Vietnam (and China) is a good examples of this. It is socialist, true; the Communist Party is a political monopoly, but it allows freer trade of goods and freer mobility of capital. See these news reports for instance.

1. The lifting of ownership limit in Vietnam is not absolute of course, but still a good development overall.

"The announcement gave few other details, although it said industries such as banking that are covered by separate rules would keep ownership limits at 30 per cent."
http://www.cnbc.com/.../vietnam-scraps-foreign-ownership...

2. "The city is extremely business-friendly. I asked a local man who works for an American company how hard it is for foreigners to invest and go into business in Hanoi. “The Vietnamese government makes it easy,” he says. “Just present them with a business plan, tell them what you want to do, and you’re good to go.” The same goes for small businesses. All you have to do, he says, “is rent the space, pay the taxes, and that’s it.”
http://www.city-journal.org/2015/25_3_hanoi.html

3. "Foreign investors of a number of high-tech investment projects in Vietnam have decided to increase the investment capital and expand their production activities to timely grab the opportunities that FTAs create when they come into effect.

LG Group is another case. Its initial investment capital was $300 million to build a factory in Hai Phong. However, it then decided to increase the capital to $1.5 billion. Samsung in its export-oriented investment strategy announced its increase in investment capital by $3 billion in November 2014.

Since members of the TPP do not include China, India and Thailand, who are the direct competitors of Vietnam in the textile industry, Vietnam will have price related competitive advantage over these countries due to tax preferential treatment that TPP countries grant to Vietnam. It is expected that with the TPP, Vietnam’s textile export turnover will reach $30 billion in 2020 and $55 billion in 2030." http://www.thanhniennews.com/.../why-vietnam-is-the-most...

4. "Indonesia is now offering a tax reduction of between 10 and 100 percent for up to 15 years to firms investing a minimum of Rp 1 trillion ($71.5 million) in certain industries, the finance ministry said in a statement on its website on Monday.

The tax break can be extended for an additional five years if companies obtain permission from the finance minister. Previously, the tax break was up to 10 years and if companies qualified, they could obtain 100 percent relief.

The ministry said “pioneering” industries are those that “have wide relevance, give added value and high externality, introduce new technology and have strategic value for the national economy.”

They include maritime transport, telecommunications, downstream metal production and agricultural processing. The new incentives went into effect on Aug. 16." http://www.globalexpandia.com/.../indonesia-extends-tax.../

5. "openness to trade almost always results in high attractiveness to foreign investments and all the opportunities they bring -- technological, financial, managerial, and market access. Clear examples are HK, Singapore and Chile. Also the socialist economies China and Vietnam that allowed certain degrees of economic freedom and the market system."
http://www.bworldonline.com/weekender/content.php?id=112142 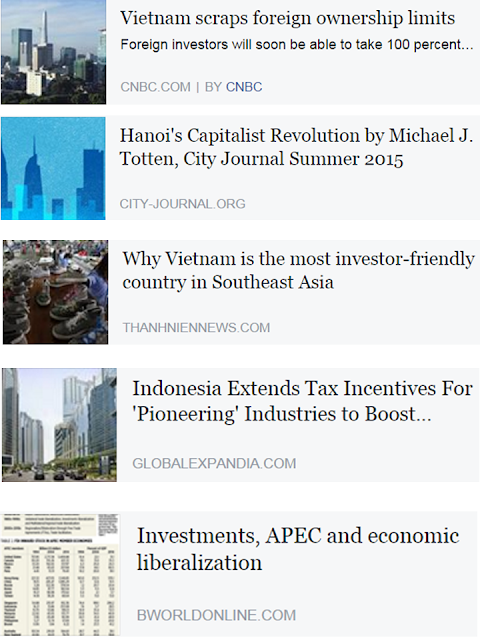 4. The major concerns of foreign investors in many countries.
A presentation by Dr. Rafaelita Fita Aldaba, 2012, "INVESTMENT FACILITATION AND LIBERALIZATION IN THE AEC: CHALLENGES FOR THE PHILIPPINES",
http://aric.adb.org/.../Investment%20Facilitation%20and...

Until 2012, the US was a major source of FDIs in the ASEAN. By 2013, capital from the US declined significantly. Investments from Japan, intra-ASEAN, UK and Netherlands are big. Data from ASEAN Investment Report 2013-2014, http://www.asean.org/.../asean-unctad-launches-asean...

"According to the World Bank, Vietnam already attracted 8.9 Billion in FDI in 2013 and is moving to relax its foreign ownership rules. Vietnam’s Prime Minister, Nguyen Tan Dung recently, signed a decree lifting their 49% foreign ownership limit on publicly listed companies. Once the decree becomes effective later this year, 100% foreign ownership in most public companies will be allowed except for some sectors covered by specific laws or related to national security. The move will make Vietnam among the most open to investment in the region, positioning it to be even more attractive to foreign investments.

The limits set by the country’s constitution on foreign equity in real estate and in key industries has set-up a half-open and restrictive business environment that has frustrated the influx of much needed FDI. PNoy and his many allies in both Houses of Congress still has the remainder of the 16th Congress to make one final push for economic reforms that will go beyond myopic political cycles." -- Prof. Dindo Manhit, ADR Institute, http://sparkbyadri.com/
------------