Reposting a good article here by Sethaput, posted in EFN Asia website last week. My short comments about his paper:

1. The World Bank (WB), along with the Asian Development Bank (ADB), IMF, OECD, UN, etc. are government clubs and associations, NOT clubs of corporations (big or small) or NGOs or other civil society organizations. Its funding come from governments, its leadership is nominated and approved by governments, its programs and lending are for governments. Thus, words like "government", "state", "tax", "regulation" are expected to dominate its literatures. It should not be a surprising finding.

2. Sethaput's observation here is spot on, bulls-eye. The UN, WB, all other multilaterals are institutions of global central planning. People and officials there think they know a lot, they have lots of numbers, they can plan and control things. I think the top officials there have messianic and megalomaniac views of themselves.

"... international experts to be experts in any country they work on, armed with examples of “international best practice” and able to ignore local history and conditions. Unfortunately this problem is by no means limited to the World Bank. Probably the most egregious example of the technocratic illusion of supply-driven solutions to poverty is the United Nations Millennium Development Goals or MDGs. Soviet-style central planning may be dead even in Russia today, but its ethos still lives on in the international development community."
------------ 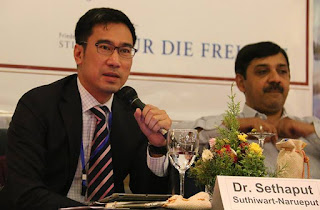 In the 352 pages and over 250,000 words in its flagship 2001 World Development Report (WDR), Attacking Poverty, the World Bank mentions the word “freedom” 12 times. By contrast, the words “government” and “state” are mentioned about 450 and 350 times, respectively. Such an omission and imbalance is particularly surprising in light of some of the Bank’s own findings. Stating at the outset that “the poor are the true poverty experts,” the Bank conducted many interviews of the poor as background for the WDR and found that the poor repeatedly described their well-being in terms of five related dimensions, one of which was “freedom of choice and action.”[2]

Why isn’t economic freedom–or its core elements of personal choice; security of person and property; voluntary exchange; freedom to enter markets and compete–at center stage in policy discussions given its critical and empirically documented role in fostering growth and reducing poverty? Why isn’t it given greater attention in policy discussions by governments, international organizations, and even civil society at large?

While the omission by governments is understandable but regrettable, the omission by international organizations tasked with poverty reduction such as the World Bank is less so. In his thought-provoking book The Tyranny of Experts, Bill Easterly states that

The conventional approach to economic development, to making poor countries rich, is based on a technocratic illusion: the belief that poverty is a purely technical problem amenable to such technical solutions as fertilizers, antibiotics, or nutritional supplements…The technocratic illusion is that poverty results from a shortage of expertise, whereas poverty is really about a shortage of rights. The technical problems of the poor…are a symptom of poverty, not a cause of poverty…[the] cause of poverty is the absence of political and economic rights, the absence of a free political and economic system that would find technical solutions to the poor’s problems.[3]

Having previously worked at the World Bank myself for close to a decade, I can readily testify to the enormous appeal that such a technocratic illusion has for a large international bureaucracy. It allows for vast amounts of resources to be deployed towards producing more outputs which can be centrally monitored and verified (e.g., more schools and hospitals regardless of whether they are wanted or really result in improved educational and health outcomes). It allows for international experts to be experts in any country they work on, armed with examples of “international best practice” and able to ignore local history and conditions. Unfortunately this problem is by no means limited to the World Bank. Probably the most egregious example of the technocratic illusion of supply-driven solutions to poverty is the United Nations Millennium Development Goals or MDGs. Soviet-style central planning may be dead even in Russia today, but its ethos still lives on in the international development community.

More puzzling is why discussions of economic freedom aren’t more center stage for civil society and the public at large. Or to put it more starkly and specifically, why is there such a distrust of free markets in Asia even though they have delivered such prosperity to the region?


One reason may be “guilt by association.” For many in the region, “free markets” and “capitalism” are associated with big, rich, powerful and well-connected business tycoons. In many countries in Asia, for example, the Forbes list of billionaires are overwhelmingly dominated by business families in such non-tradable and highly regulated sectors as alcohol and tobacco, telecommunications, banking, and property. In the US, by contrast, the names that come to mind when thinking of the rich probably include names like Bill Gates, Warren Buffett, and other Silicon Valley types. Innovative, skilled, first-generation wealth rather than connected, powerful, inherited family wealth. The unfortunate irony is that the public faces associated with “free markets” in the region are from markets which are not really that free. Another likely reason are government handouts. With the bulk of the populace still in agriculture, governments are seen as a source of largesse and succor to help offset the vagaries of price cycles and crop failures.

Given the above, how then do we bring economic freedom back to the central position it should occupy in public and policy debate in the region? We need to reframe the debate in such a way that the key elements of economic freedom resonate better and get greater traction with the public. At least three things come to mind.

First, lose or change the jargon. “Freedom to enter markets and compete” sounds too abstract while “free markets” suffers from negative associations as discussed above. Focusing instead on a “level playing field” and “fairness” may be a better way to communicate and introduce some of the same ideas in a way that resonates better. Only the cronies like crony capitalism. Similarly, railing against “size of government” in a context where the government is often seen as a source of largesse is also likely to be self-defeating. Better instead to focus on quality of governance issues like “anti-corruption” and “equal treatment.”

Second, promote new “poster children” associated with economic freedom. The public face of free markets and capitalism needs to be changed from the typical connected, powerful family of a business tycoon to innovative, new, smaller scale entrepreneurs. We need to find the future Steve Jobs and Jack Mas of the region. If hedge fund billionaires and Wall Street were the only things people associated with free markets and capitalism in the US, such ideas would probably not resonate as well with the general public as they do.

Third, be more strategic and selective. Not all of the elements of the economic freedom agenda will resonate in each country. Better to prioritize those few concepts which are most likely to gain traction in light of local circumstances. Together with the Atlas Network and the Friedrich Naumann Foundation, for example, we recently did a Thai edition of Gwartney et. al.’s Common Sense Economics book which included local case studies on various subsidy schemes (rice mortgage; LPG; first car buyer) which were topical.

Let me end on a positive note. While there may be some additional hurdles in the region preventing the ideas of economic freedom from resonating more widely, history and experience will reduce these hurdles. Economic freedom has been and will continue to be instrumental in promoting growth and reducing poverty throughout the region. In doing so, it will generate greater buy-in to these ideas. In a 2014 Pew Research Center survey of support for the free market system, respondents were asked whether they agreed with the statement “most people are better off in a free market economy even though some people are rich and some are poor.” The countries where people agreed most with this statement were Vietnam (95%); Bangladesh (80%); Korea (78%); and China (76%), higher than in the US (70%). The challenge for us is to help sustain this support more broadly and reduce the risk of undermining the very engine which has driven much of the region’s prosperity.

[1] World Bank (2001), What the Poor Say. The other dimensions were material and physical well-being; security; and good social relations.


[3] These remarks represent the views of the author, and not necessarily those of the Foundation. He can be reached at sethaput@thailandff.org. The Foundation website is www.thailandff.org
----------