A friend from the foreign media asked me some questions about the current pork barrel scandal. This is an expanded version (more Qs, more As) of what I sent to him. The posters, I just added here as I support their calls.

1. How is pork barrel made? What is the process to get the money?

--> Legislators, Congressmen and Senators, identify priority projects for their district (District Congressmen) or anywhere in the country (Party List Congressmen, Senators) and the implementing agencies in the Executive branch. Such project identification and funding is incorporated in the annual budget bill that become a budget law called the General Appropriations Act (GAA). So in theory, the legislators do not even touch the money as it goes from DBM (releases the money as stipulated in the GAA) to the specific agencies (receive the money, implement the identified projects).

2. Where does the money come from? How much money is involved annually?

--> From the budget, via the GAA, funded from various sources: (a) taxes, (b) regulatory fees, (c) privatization proceeds (if any), and (d) borrowings. Congress appropriates the money, how much will go to what agency. DBM releases the money to the implementing agencies (DPWH, DepEd, DOH, DSWD, etc.). What for, as usual to "fight poverty" (even if some poverty is government- or self-inflicted) and other forms of bleeding heart goals.

On average, P70M/year for each Congressman/woman, both District and Party List, and P200M/year for each Senator. But those in the opposition would often get less while those in the administration tend to get more. That’s around P27 billion a year total for both the House of Representatives and the Senate. 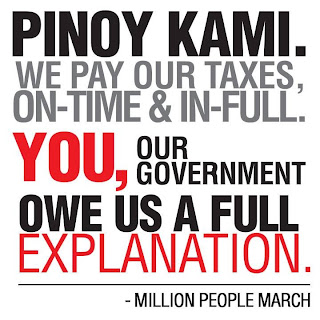 à The Commission on Audit (COA) and the various Congressional Oversight Committees plus Appropriations hearing. COA is created by the Constitution, not by legislation and its main function is to audit all government agencies to make sure they follow the rules stipulated in spending laws. If any agency violates, COA audit reports are basis for any corruption charges to be filed against the Ombudsman or the regular courts.

4. How is corruption and possible robbery committed, say in the current pork barrel scandal?

--> The corrupt legislators would instruct the DBM and the implementing agencies to give the money to an NGO or private firm as sub-contractor for project implementation, like the JLN Corporation. As one supposedly insider of the JLN firm said, Ms. Napoles would give 70 percent of the entire amount for non-existent projects to the legislators. Napoles would get the balance, about 30 percent and give the “for the boys” share to various agencies that are partners in crime – implementing agencies, LGUs if any, and COA if any. Some reports said Ms. Napoles and team would only get 15 percent net, meaning “for the boys” would get the other 15 percent.

5. How did the scandal come to light? Should we assume that the misallocation of funds is much broader than the politicians currently in the hot seat?

--> From what I read, there was a fight within the JLN camp. Ms. Napoles detained one of her staff, the penalized talked, the story was picked up by media as the leads and info were juicy and some paper trails were shown, then it exploded.

Yes, the scam is much broader than the existing P10 billion Napoles scandal, total for many years. Meaning there are other operators and fixers whose names and identities are still not divulged as there are no internal whistle blowers yet. Many legislators have their own share of sin and corruption in this pork barrel issue. 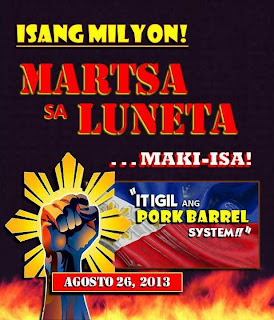 --> The prevailing mood among the articulate groups in the public is to call for the abolition of pork barrel of legislators so that they can concentrate on legislation and fiscalizing the Executive branch. Other groups justify pork barrel as they themselves benefited from it in the past, meaning the money was not stolen. They just want more transparency how much were spent for whom and on what projects.

7. Can pork barrel be abolished?

à No. If pork barrel was not invented yesterday, then it will be invented today. And if current pork barrel is abolished today, they will invent a new scheme tomorrow. Why?

Total budget of P2 trillion this year and nearly P2.3 trillion next year, legislators will deliberate on such a huge money, approve or reduce the budget of some agencies, and they will have zero "share" from such huge money? That is impossible.

The Office of the President (OP) has the  biggest pork barrel of all. Only about half of the nearly P2.3 trillion budget next year is under new appropriations, the other half is under programmed and automatic appropriations, like interest payment for the public debt, internal revenue allotment (IRA) for LGUs, special funds for government corporations, hospitals, universities, etc. While the former can be scrutinized by Congress if they wish to, the latter is hardly scrutinized. The OP and DBM have great leeway how to allocate and spend such money.

8. Can legislators pork barrel then be considered as compromise by the Executive branch so its budget request will be approved without much debate and questions?

à Yes. Both the Executive and Legislative branches are happy as they both get their own shares of pork barrel. Whether they will use the money productively or waste/steal it is another question.

9. Can an American-style system where a representative can only allocate money to a project in his district through specific provisions in a budget bill that is then voted on by the full Congress, be adopted?

--> Yes, that is how it should be done here, at least in theory. The difference would surface in (a) how it is implemented (if implementing agencies and/or LGUs are more corrupt), (b) how it is monitored and audited (if COA people are corrupt) and (c) giving government money to “non-government” organizations (NGOs).

It is hard to single out people and certain legislators as it is a dance not only by two people but by three, four or more players.

10. If pork barrel cannot be eradicated as it will simply be reinvented, what are the other alternatives to reduce if not control corruption in government?

à Our bias in Minimal Government Thinkers, Inc. is to limit government size, the bureaucracies and their regulatory and taxing powers. Or at least control further expansion of government. The main function of government, its raison d’etre or reason for existence, is to protect the citizens’ right to life (against aggressors), right to private property (against thieves) and right to liberty and freedom of expression (against bullies). All other government functions are either secondary or unnecessary. This is where shrinkage of government bureaucracies and spending should occur. Where there is less money to steal, less stealing will happen.
---------------