The pork barrel scam and robbery continues, we should keep the pressure until a big investigation will yield some of those corrupt legislators in jail. Asking for the abolition of pork barrel I think is next to impossible now. But asking for the heads of those who have been implicated so far, past and present, is not impossible, so long as political pressure from the public is sustained.

Also, when many NGOs have become government-funded organizations (GFOs), this is one indicator that corruption has become pervasive. So-called non-governments have become part of government, pasimple lang.

A friend from UP, JB Baylon, has posted several comments and ideas in his facebook wall about the issue. I like his status updates, made from August 7-10, today, so I asked his permission to blog them, below. Thanks JB. Those in parenthesis are my translation. 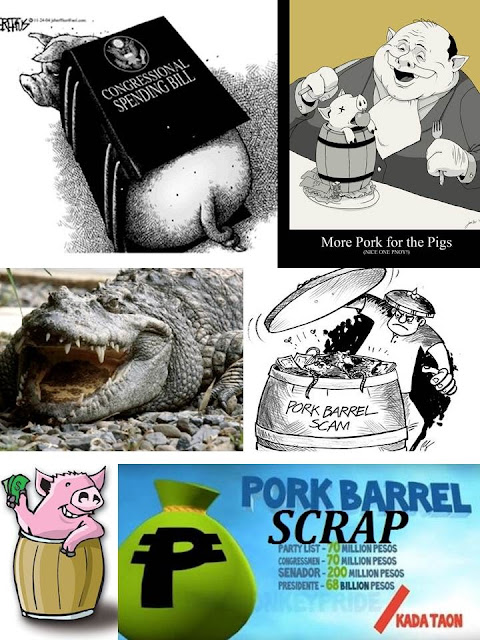 1. (Pork barrel) Don't you think this issue more than anything else is what we as a nation should focus on? If true, it reveals the ROT that goes to the very core of our political system, and could very well explain why no Filipino believes that with diligence and hard work and by following the rules he will succeed on the merits.

Where are those civil society folks who were "brave" enough to face Marcos, Erap and Gloria? Why is there only silence now? Is is it because their friends are involved and they don't want to hurt or embarrass their friends by speaking up?

Is it because even they are involved???

And then we still complain why things never change in this country?

Buti na lang we can divert our attention and just cheer for Gilas Pilipinas....never mind if the whole country is rotting from the inside.

2. As citizens we should rejoice at this Napoles issue and ensure that it is played out in full and to the bittersweet end. How the administration handles it will be the ultimate test of the Daang Matuwid advocacy.

3. Why should poor we -- the "Boss" -- when we are sick, go to a PUBLIC HOSPITAL like PGH that is straining at the seams, its staff working overtime with over-used equipment housed in a 100-year old structure, while our "Servants" , when they are sick or claiming to be sick check into super-modern PRIVATE HOSPITALS? Don't you see something wrong in this equation??? And the SERVANTS pocket the priority development fund??? No wonder they abolished the death penalty....

(Where’s that socialist and her allies who are rabid critics of mining firms? Why are they silent on pork barrel? Is it ok to steal but not ok to mine? Or your friends are linked to it? Your network are good at frying the mining firms but are silent on your friends' stealing?)

(Where are the idealistic youth, marching against China, US, Apeco, mining, etc? Why are you silent on pork robbery? Your silence is defeaning.)

(Where is the Church? Why is there no pastoral letter on pork? Or they received portions of the pork?)

(Where are those who marched against Fertilizer fund scam? You cannot march because your pockets are full of pork?)

(A snatcher in Quiapo can be rubbed out by the police. The snatcher of pork, they can rub out the evidence. Pork for the masses, not for the pockets.)

(They protest loud against mining, against US or China aggression. Then silent on the pork robbery?  Do they get a share? Or they have selective idealism?)

(Where are the youth who, during the 2010 and 2013 elections were shouting for change? Have your tongue suddenly got short and you can’t shout against pork robbery? Are your mouth full of lechon kawali? And change means “our turn”?)

(Watch the media outlets. See who among them are silent on pork and who have the principled stand.)

12. Kung noon: "The Filipino is worth dying for", ano na kaya ngayon?