* This is my article for the August 2013 issue of Business 360, published in Kathmandu, Nepal. The two figures below, ADB and WB lending to Nepal respectively, were not included in the published article due to space limitations.
----------- 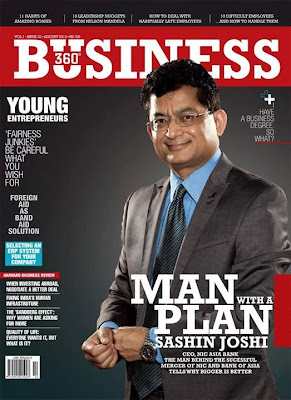 For many years, the singer from the Irish band U2, Bono, has been at the forefront, pressuring governments of rich countries of North America, Europe, Japan and a few others, to keep pouring foreign aid to Africa and other poor continents of the planet. Africa is often a test case because since about 1950, many governments of that continent have been receiving  an average of $10 billion a year for six decades, and poverty has remained rampant. 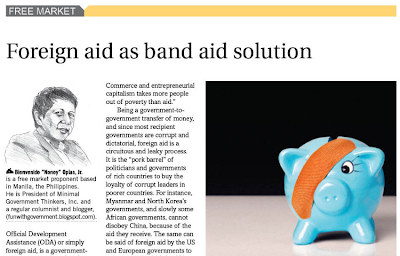 In 2005, Bono and another British rock star, Bob Geldoff, were among the pioneers of “Make Poverty History” movement. Since then, most economic indicators show that poverty has remained if not expanded in  many target countries. Recently though, Bono seems to have changed tune. In a speech at Georgetown University, he said, “Aid is just a stop-gap. Commerce and entrepreneurial capitalism takes more people out of poverty than aid.”

And rightly so. Being a government to government transfer of money, and since most recipient governments are corrupt and dictatorial, foreign aid is a circuitous and leaky process.  It is the “pork barrel” by politicians and governments of rich countries to buy the loyalty of corrupt leaders of poorer countries. For instance, Myanmar and North Korea governments, and slowly some African governments, cannot disobey China, because of the aid they receive. The same can be said of foreign aid by the US and European governments to many countries in Asia, Africa and South America.

There are some “outliers” among African leaders. The President of Rwanda, Paul Kagame, among the  early proponents of private investment and improved rule of law, said that “Entrepreneurship is the most sure way of development.” *

The US government’s aid policy via huge funding from the WB, USAID, the UN and others, is itself highly wasteful if not corrupt. The federal government is borrowing hundreds of billions of dollars every year  just to fill a huge revenue gap every year, and yet it is spending tens of billions of dollars yearly to other governments via those aid institutions. Many foreign governments, aid officials and bureaucrats and local consultants in other countries are feasting on this huge amount of borrowed money. 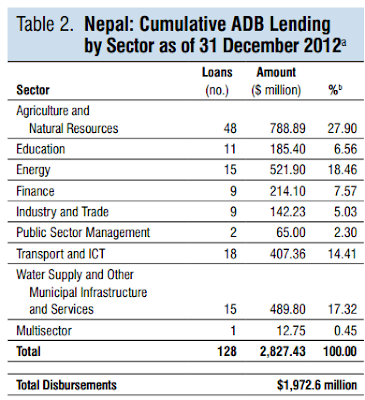 The government of Nepal is among the recipients of such aid, but not as big as what other governments received. From the Asian Development Bank, the Nepal government has received nearly $2 billion of loan.
Source: ADB and Nepal Fact Sheet, http://www.adb.org/sites/default/files/pub/2013/NEP.pdf 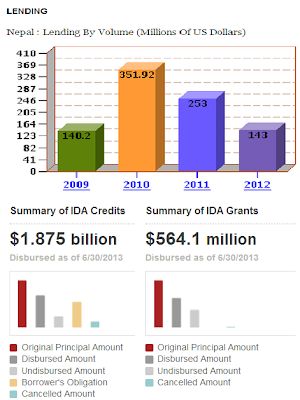 And from the World Bank group, the Nepal government has received disbursement of $1.88 billion in loans plus $0.56 billion in grants.

There are other sources of foreign aid, like loans and grants from the European Union, WHO, UNDP and other agencies of the UN.
Sources: WB.

Aid is a band-aid solution and it should be a short-term and not forever solution. The aid institutions should have a “sunset” provision in their respective charters, meaning a section when they should close shop. But there is none as they intend to stay forever, expand forever.

A more direct people to people transfer of money and resources at the global level is through international trade, investments, tourism and people mobility. A company abroad likes certain products by a local producer, the goods are shipped and the producer gets paid, the producer pays its workers, managers and suppliers, and those who work and work efficiently are rewarded. The same applies to investments, tourism and movement of people across countries and continents.

* Source of quotes from Bono and Kagame is Values and Capitalism blog, November 2012.