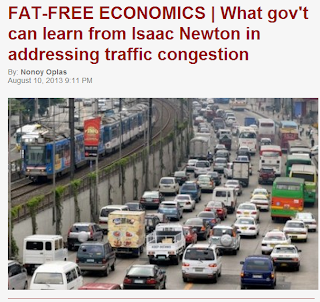 British physicist and mathematician, Sir Isaac Newton (1642-1727) was known for his contributions to classical mechanics and physics. His famous theory, which I remember from high school, is the so-called “Newton’s Laws of Motion.”

Having done research on various social and economic issues for many years, it dawned upon me that Newton’s three laws can be applied to society as well, especially on how the government attempts to solve the daily traffic congestion in Metro Manila and other big cities in the country.

Below are Newton's Laws of Motion and my re-interpretation when they are applied to Philippine society.

A new government policy banning provincial buses from entering Manila and Makati is a clear example that the bureaucracy is terribly detached from the needs of many provincial passengers. The government simply left tens of thousands of bus passengers stranded along Roxas and Macapagal boulevards with no alternative to get to their destination quicker. For those able to catch in-city public utility vehicles (PUVs) had to spend extra, making public transport costlier, more time consuming and more inconvenient. This was despite government efforts to leave their cars and take public transportation so traffic and air pollution are reduced.

Many government officials live in Metro Manila, not in the provinces. For those who live outside, even if they take the bus, there are red plate cars waiting for them at the bus stations. The bureaucracy is holed up in command-and-control thinking because they have exempted themselves from the distortions and inconvenience of the policy they imposed on the rest of society.

The government tendency to blame private players car owners, bus and van operators and drivers, and even passengers, thus policies restrict them. Note here the recent proposal to expand the car use prohibition (a.k.a, number coding) from one day a week to two days. The command-and-control philosophy gives them the illusion of being right despite the paucity of rational and scientific studies to support whatever new restrictions they wish to implement. Government agencies do not see themselves and their policies among the major causes of traffic congestion.

When government prohibits provincial buses to enter key areas in Metro Manila to "reduce traffic,, passengers are first inconvenienced, as shown by the long lines of inconvenienced passengers from Cavite and Batangas on the first day of the ban. But soon, many of these passengers will buy second-hand cars or new motorcycles and drive to Metro Manila, and this will worsen traffic congestion.

This bureaucratic gravitational force is huge because the numerator is big while the denominator is small. As government makes commuting more time consuming, costlier and more inconvenient (the 2-3 rides become 3-4), more people will either cramp in Metro Manila or buy more cars or motorcycles to get to their destination quicker, or slower (due to more traffic) but more conveniently and safer.

An alternative the government should consider is that instead of segregating between Metro Manila and provincial buses, bus companies should be allowed to choose their routes; for example, from Cavite to Fairview or Monumento to Bulacan or C5 to Pasig-Marikina.

These buses can pick up and unload passengers along Edsa or C5. Make the bus-train commute more convenient and cost-effective, and many people will leave their cars at home.

In addition, many jeepneys and tricycles will die a natural death, without creating a new law, administrative order or local ordinance. And we shall have less traffic.

Let us encourage less, not more, government restrictions and prohibitions. Government should focus on going after the real criminals, like bus hold uppers, terrorist bombers, murderers and kidnappers, rapists and molesters. Transporting provincial passengers to their offices or schools in Metro Manila is not a crime.