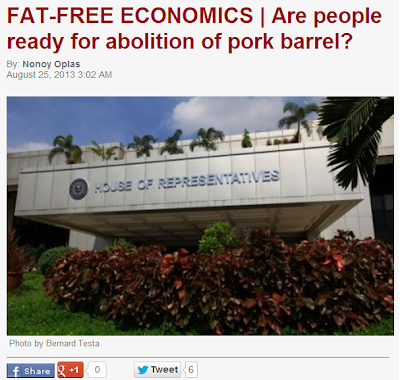 MANILA - From Countrywide Development Fund (CDF) to Priority Development Assistance Fund (PDAF) and now a reformed pork that has yet to be named. The legislators' pork barrel is not truly abolished but only reformed.

The pork barrel system can truly be eliminated, but that would mean a significant shrinking of the Executive branch -- in budget, subsidies, size of the bureaucracy and regulatory powers. Because an activist and really independent legislature will disallow unnecessary spending. Are the people ready for this scenario?

The President announced last Friday that he is abolishing PDAF. A reformed budget for legislators’ special fund will be set up subject to the following guidelines:

1.       Projects to be funded to come from a specific menu of qualified projects;
2.       Disallowed are soft projects: fertilizers, seeds, medicines, medical kits, dentures, funding for sports fest, training materials, and other such items;
3.       Disallowed are temporary infrastructure, dredging, de-silting, re-gravelling, or asphalt-overlay projects;
4.       Funds cannot be disbursed to NGOs and certain GOCCs, such as ZREC and NABCOR, both of which, along with others, will be abolished;
5.       Funds must be limited to the district or sector of the legislator who sponsored it;
6.       All items will be subject to open and competitive bidding, with all bid notices and awards posted on the Philippine Government Electronic Procurement System (PhilGEPS); and
7.       For transparency, each will be disclosed in the DBM and related agency websites, as well as the National Data Portal of the government.

This means legislators’ pork barrel system will continue but (a) limited to hard projects like new roads, (b) coursed through line departments, and (c) pass through competitive bidding.

Legislators’ pork barrel is a compromise allowed by the President so the former would support certain spending and revenue-raising measures. Aside from the explicit pork barrel -- which is a separate item in the National Expenditure Program (NEP) -- there is also an implicit pork in the form of “budgetary insertion” by legislators. They can cut the proposed budget of certain agencies they do not like, then increase the budget of another agency that is friendly to them, with the implicit arrangement that the legislators, or even some Congressional staff, will get a portion or the entire amount of such hike in the agency's budget.

The national budget hit P1 trillion six years ago, while the P2 trillion is upon us this year. The P3 trillion budget will be reached in 2016 or 2017. The public debt stock is rising by around P400 billion a year. Interest payment is rising to P313 billion in 2012, P333 billion this year and P352 billion next year.

This expansion of public spending, borrowing and debt payment -- as well as new or higher taxes -- was made possible because the legislators had allowed it, because they have a "share" of that huge spending, through pork barrel and Congressional insertion. If we disallow the legislators their “share” or claim to the national budget, they will become activist and more independent minded, and they will disallow such uncontrolled expansion in spending, borrowing and taxation by the Executive branch.

Many government-owned or controlled corporations (GOCCs) and government financial institutions (GFIs) are breeding grounds for cronyism and political patronage. Some big supporters and financiers in previous elections who cannot be given Cabinet positions are appointed as president or board directors in GOCCs and GFIs. For instance, the National Food Authority (NFA) is among the perennially losing GOCCs and deficit generators.

If these GOCCs are to be scrutinized by an activist and really independent Congress, most likely they will be stripped of their funds and privatized, or at least be significantly shrunk as they contribute more to losses and hence, more public borrowings or more taxes. To avoid this, legislators are given their own share of pork so they will allow continued waste and inefficiency in the Executive branch.

The Bottom up Budgetting (BuB) system or related schemes have allowed NGOs, people's organizations and civil society organizations (CSOs) to "insert" their own favorite projects, their own “pork" in the budget. It is P8 billion plus this year and P20 billion next year. LGUs too have their own projects inserted in the budget, on top of their IRA and locally-funded projects.

If legislators are to be true to their mandate to scrutinize and disapprove certain huge budgetary requests and endless subsidies, the national budget will shrink. But many people who clamor for "pork abolition" do not want that either. They want their own subsidies and pork retained or expanded while stripping legislators of their share in the loot.

Most people who demand a "spend-spend-spend" policy are not aware that previous overspending has resulted in over-borrowing, so the interest payment is a big penalty on the public. To get a P10 billion increase over the previous year's budget for the favorite department, people may jump with joy. But to pay P350 billion in interest on debt does not bother them.

We will never have "freedom from debt" unless we adopt the "freedom from borrowing" mentality. Public education among other social sectors are among the most inefficient and wasteful. When you provide books and education for the poor -- from elementary to college and even graduate studies -- the result should be productive people able to help themselves out of poverty. Only one generation of useful and effective spending and poverty should have been controlled many decades ago. But this never happened. The inefficient, wasteful and even corruption-laden service delivery was made possible, was never questioned or controlled by the Legislative branch because lawmakers benefited from such wasteful public spending.

Posted by Bienvenido Oplas Jr at 8:41 AM