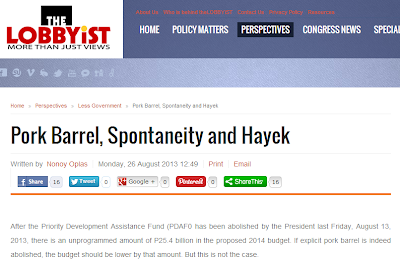 After the Priority Development Assistance Fund (PDAF0 has been abolished by the President last Friday, August 13, 2013, there is an unprogrammed amount of P25.4 billion in the proposed 2014 budget. If explicit pork barrel is indeed abolished, the budget should be lower by that amount. But this is not the case.

According to DBM Secretary Butch Abad, legislators can introduce their priority projects, subject to certain guidelines as mentioned by the President last Friday, into the budget. Meaning those projects will be inserted into agency budgets and the size of the proposed budget has remained the same, not declined. This practice is often called as “Congressional Insertion.”

The budget submitted by DBM to Congress after the President’s State of the Nation Address (SONA) is a compilation of financial requests from four groups: (a) provincial and regional offices of an agency like  DA, DILG, DTI, etc., (b) Central offices of those agencies and Departments, (c) local government units (LGUs), and (d) NGOs, people’s organizations via “participative budget consultations" like the recent Bottom up Budgeting (BuB) scheme.

Once the budget is discussed and heard in Congress, legislators can disapprove some proposals and projects, say projects coming from Mayors, Governors  and NGOs who are not friendly or non-ally of the legislators. Then they can increase the budget of certain projects which can benefit their friends and allies, like in municipalities and cities that supported them in the last election. It is the prerogative of the legislators to do this because they are empowered by the Constitution to scrutinize and pass a budget law every year.

This Congressional Insertion is one form of soft or implicit pork barrel. Thus, pork barrel can never be truly be abolished, without expecting the national government to shrink in size and budget. Only a truly independent and activist legislature can control and disallow wasteful or excessive spending by the Executive branch.
---------

The citizens’ “Million March” in Luneta on August 26 is unique because it is largely spontaneous. While Edsa 1 revolution in 1986 was also spontaneous, big politicians and political groups later set the tone and direction of the protest movement. Besides, it was directed against a particular leader, the former President Marcos.

The “Million March” is different. It is not directed against a particular leader, say President Noynoy Aquino, but against corruption in general and corrupt officials in government, especially among the legislators implicated in the Napoles pork scandal. And there are no grand speakers with grand speeches and promises, no plackards and streamers, no dominant political color or political group organizing it.

The  spontaneity and lack of central organizers with central planning thinking makes the “Million March” exciting and unpredictable. The activist public have become wary of the usual protest leaders and groups. They suspect that these groups are no different from the politicians that they criticize. So the public is now opting and experimenting the politics of spontaneity.

Big politicians, big political groups and big government do not like this kind of arrangement. They are used to dealing with centralized action so they can focus their politics of compromises, and bribery if necessary, on the leaders of those movements.

Famous Austrian economist and political philosopher, Friedrich Hayek, extolled the value of spontaneity in his book, The Constitution of Liberty (published 1962). He wrote,

Liberty is essential in order to leave room for the unforeseeable and unpredictable. Because every individual knows so little that we trust the independent and competitive efforts of many to induce the emergence of what we shall want when we see it….

Freedom means the renunciation of direct control of individual efforts that a free society can make use of so much more knowledge than the mind of the wisest ruler could comprehend… Freedom granted only when it is known beforehand that its effects will be beneficial is not freedom. Freedom means that many things will be done which we do not like. Our faith in freedom rests on the belief that it will, on balance, release more forces for the good than for the bad.

Hayek was referring to the evil of central planning in running societies and governments. Leave the individuals to run their own lives, their own households and communities, so long as the government is there to implement the rule of law – few, general laws and prohibitions that apply to all, no one is exempted and no one can grant an exemption. Like the laws against murder, stealing, abduction, land grabbing, extortion, destruction of properties.


The politics of central planning as practiced by many governments around the world, armed with huge annual budget as authorized by their legislators and the legislators getting their own pork in exchange for passing such budget laws, works against individual freedom and facilitates corruption. Corruption not only in wasteful or stolen spending, but corruption of values of the people, that they can relegate certain personal and parental responsibility in running their own households, and pass them as government responsibility.
-----------