The proposal to have a Competition Law in the Philippines has been there since about two decades now. No law yet, and neither is it becoming a law soon.

Somehow I support having a Competition Law, but this is secondary to the bigger, more important proposal, to amend the Philippine Constitution to abolish the limit on foreign equity investments, and the restriction on foreign professionals to practice their profession here.

Meanwhile, a friend, Atty. Jemy Gatdula, recently wrote an article on Competition policy, posted in his column in BusinessWorld last September 05, 2013. Italics below is mine. 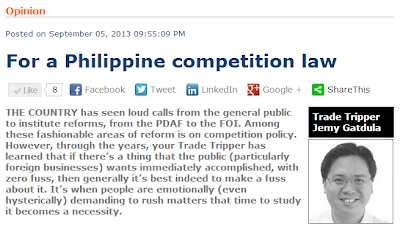 THE COUNTRY has seen loud calls from the general public to institute reforms, from the PDAF to the FOI. Among these fashionable areas of reform is on competition policy. However, through the years, your Trade Tripper has learned that if there’s a thing that the public (particularly foreign businesses) wants immediately accomplished, with zero fuss, then generally it’s best indeed to make a fuss about it. It’s when people are emotionally (even hysterically) demanding to rush matters that time to study it becomes a necessity.

As BusinessWorld reported (Competition Law Urged, 28 August 2013) on the East Asia Forum on competition law last week, the consensus seemed to be that “a competition policy is considered important for a country to grow and consider itself an advanced economy.” Furthermore, “competition law should also be separated from politically motivated industrial policy as the latter allows the government to choose which industries to champion instead of letting natural competition occur in the market.”

However, there’s an obvious need to examine the assumptions on which such assertions are made. One assumption can be seen from President Noynoy Aquino’s speech during the forum: “As a student of economics, I know that monopolies are incredibly inefficient. It kills innovation. There is zero impetus, in a monopoly, to continually improve your product or your service, simply because you have your market cornered.”

This was disputed by the Anti-Pinoy Blog <http://antipinoy.com/; see Anti-Trust Bill to Improve Competition in Philippine Economy -- Or Otherwise>: “When you remove the rhetoric -- it boils down to the government wanting to increase regulation of the market under the guise of ‘promoting competition.’ Such a policy does not present any benefit to consumers and imposes more harm. More regulations and more agencies will not improve competition in the protected Philippine economy. It has not worked for decades -- it’s not about to work now.”

“The myth peddled to the common tao is that unregulated markets lead to the creation of monopolies. Therefore government has to step in to ensure that companies will not have a coercive market monopoly. The reality is that coercive monopolies cannot exist without government protection, special regulations, exemptions, and subsidies.”

Nonoy Oplas, president of Minimal Government Thinkers, Inc., agrees: “When government intervenes hard to force or pretend to attain social equality, such intervention will naturally result in subsidizing the lazy and irresponsible, while penalizing and over-taxing the efficient and industrious.” For him, “fierce competition is fair competition. Government-managed or protected competition is not fair competition.” And I concur with his assessment that, at least for the present, the “best anti-monopolization regulation that government can do is to have rule of law strictly enforced.”

Indeed, as your Trade Tripper pointed out, no ban (constitutionally) on monopolies definitively exists. Article XII, Section 19 (along with Section 10) of the Constitution merely provide that the “State shall regulate or prohibit monopolies when the public interest so requires. No combinations in restraint of trade or unfair competition shall be allowed.” (italics supplied) This could serve as justification for a company succeeding through merit in an industry that encourages a “natural monopoly,” defined by Wiki (yes, I know) as occurring “when, due to the economies of scale of a particular industry, the maximum efficiency of production and distribution is realized through a single supplier.”

And the idea that “natural monopolies” can be apt for our country, considering the small size of our domestic market, has substantial merit. As such, Filipinos should therefore be supportive of even larger Filipino conglomerates. Take San Miguel Corp., for example, which, despite its size and reach, could not really be considered possessing monopoly power due to the nature and threat presented by global (or regional) competition.

Claims related to predatory pricing also need to be examined. As Anti-Pinoy explains (rightly, in my view): “This assumption can only take place if and only 1) the predator has deep financial resources; and 2) -- if there are very high barriers to entry -- such as special regulations, exemptions, subsidies, and protections by the State.”

Even declarations like “all advanced economies have a competition policy” should be rendered suspect. Simply because we’re not an “advanced economy.” Which should tell you a lot about the wisdom of importing and imposing a regulatory framework tailored for countries whose circumstances are not similar to the Philippines.

What Filipinos should be therefore discerning about are foreign corporations acquiring Filipino companies or influence to the point that monopoly powers are exercised beyond the reach of Philippine jurisdiction. Another is the relationship that competition law has with corruption. Finally, there’s the dire need to constrain the ill-effects of having both political and economic power held by a select number of families in the country.

As your Trade Tripper wrote repeatedly in the past: The issue is not whether we should have a competition law (we should) but rather the kind of competition law that will work effectively for the interests of Filipinos.