A friend, one of the few real political science academics who can dabble in political theory and discuss things in their facebook walls or blogs, Amado “Bong” Mendoza  (http://bongmendoza.wordpress.com/) of the UP Pol. Science Department, posted the following in his facebook wall yesterday. 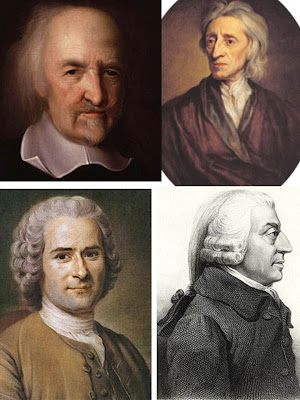 I like Bong's discussions about these three classical thinkers of the social contract theory, so I am reposting them here. "Social contract" is an agreement, explicit or implicit, between citizens and the State and how freedom and power are to be divided and implemented between them. I made a few comments to Bong's discussions. I added the years of those three classical thinkers plus Adam Smith. Photos (top, Hobbes and Locke; bottom, Rousseau and Smith) are from wiki.
---------

Consequently, life was nasty, short and brutish. Civilization was not possible in this so-called state of nature. However, since human beings were rational, they agreed to leave this world of delusion, of fake freedom and submit to the Leviathan's authority.

The implied social bargain is that submission to authority will result in a life so much better than that in the state of nature.

How is this discussion connected to the current abuse of public money by the Philippines' political class and its minions? One can argue that the rape of the public treasury sends us back to the barbaric state of nature.

2. John Locke (1632-1704) saw the social bargain to get out of the state of nature as one between each and every person who becomes a citizen of political society.

The people are the ultimate sovereign and government is its public servant.

There is a separate contract between the people and government. As public servant, the government is contractually obligated to protect the life and property of its citizens.

Failure to do so is a simple breach of contract.

However, if government itself (or key officers of government) actively defrauds its citizens of their lives (extra-judicial killings) and their property (plunder of the public treasury), this act is high treason.

Papa John warned that the sovereign people have the right to rebel against a grossly abusive "servant."

3. Jean Jacques Rousseau (1712-1778). Of the three social contract philosophers, Rousseau is the most controversial and less straightforward. He talked about people being "forced to be free" since they apparently do not know what's best for them.

And yet Papa Jean was concerned with, like other political philosophers, ensuring the freedom of the individual was compatible with the authority of the state.

The growth of human population has led to increased human interaction and interdependence. Beginning with his solitary noble savage, Papa Jean saw the emergence of inter-dependent societies that required ordering by political authority.

The noble savage is undoubtedly free. The status of the individual in inter-dependent communities is unclear. Papa Jean suggested that the latter have actually degenerated into class-divided societies where the rich impose unfreedom on the poor.

Rousseau is clearly dissatisfied with this set of affairs. He argues that the key to the reconciliation of individual freedom with state authority is the idea of the general will: the collective will of the citizenry taken as a whole. The general will is basis of law and is willed by one and all. In following the law, each citizen follows his own will and is thus free.

All of the discussion above may be Greek to us but Papa Jean made some practical points. He was not in favor of political parties because they represent narrow particular wills. He was also not in favor of representative democracy or government. In the determination of the general will, each citizen must directly manifest his preferences without being filtered by a representative.

Papa Jean was in favor of direct democracies which must be of necessity small in scope.

Will there be a need for pork barrel allocations in Papa Jean's direct democracies?

The following are my comments to Bong’s postings and his reply:


Nonoy: The problem is that the terms of submission, or "terms of reference" between citizens and the Leviathan was either not well-defined, or it may have been defined but the Leviathan simply liked the initial power -- to coerce, regulate, prohibit and tax -- given to it, and expanded on its own, slowly but no limit.

Amado: Nonoy, that was understandable since Hobbes was a Royalist who abhorred the Civil War tumults. While he was seen as a champion of absolutism, his philosophical device (Social Contract) betrays to a certain extent absolutist arrangements since it implies contractual relationships. At any rate, I think only authoritarian governments are inspired by Hobbes now. Modern democracies swear by Papa John Locke. I am not sure if Papa John Stuart Mill is a favorite.

Nonoy:  Bong, two breaches of contract were made by the state.
One, it expanded beyond the contract of protecting only the citizens' right to life and private property (and liberty). The state went into numerous forms of subsidies, welfare, regulations and prohibitions.
Two, as you mentioned above.

Rebellion against an "abusive servant" is not possible when the people themselves do not see breach #1 as a problem. They only rebel against certain administrators and leaders of the state, but not the extra coercion made by the state, regardless of the personalities involved.

Amado: Rebellion against the abusive servant (the state regardless of who staffs it) is a very big thing. In fact, historians call it a revolution and revolutions are rare. I agree with the contractual breaches that you note. The practical problem is how to remedy these breaches and prevent further state expansion.

Nonoy: We have a big problem in attempting to "prevent further state expansion." So many people, academics, NGOs, consultants, media, church, other non-politicians, are demanding "more government please." If there is government failure in its core function to protect the citizens' right to life and right to private property, one can imagine the extent of government failure in fulfilling its numerous non-core functions and intervention.

Nonoy: If Rousseau took off from the discussion of John Locke and Adam Smith (1723-1790; the latter is 12 years younger than Rousseau and hence, they were somehow contemporaries), then he would realized that the "general will" has already been defined by Locke and Smith: right to life (against murderers and aggressors), right to private property (against thieves, destroyers of property) and right to liberty (against bullies, dictators and despots).

So if the "general will" has been aptly defined, legislation should follow along these lines and succeeding legislations outside of these core functions are deemed to be secondary or unnecessary, and are likely to subvert the citizens' general will.