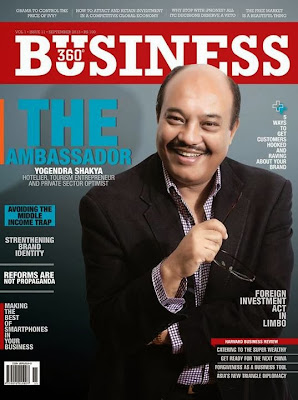 
Many Asian economies are now among the “engine of growth” for some countries within and outside the continent due to their huge contribution to international trade as big exporters/producers  and big importers/consumers, as well as big recipients of foreign remittances. 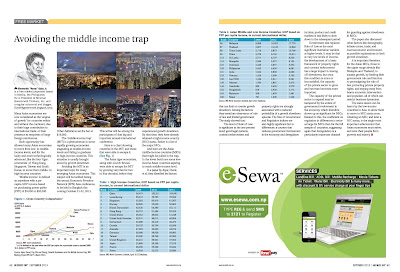 Such opportunity has allowed many Asian economies to move from low income to middle-income levels, and for the lucky and more technologically advance ones like the four “tiger economies” of Hong Kong, Singapore, Taiwan and S. Korea, to move from middle- to high-income countries. 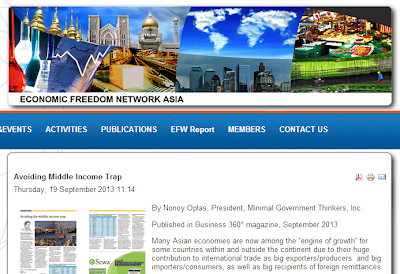 “Middle-income trap” (MIT) is the phenomenon of some rapidly growing economies stagnating at middle-income levels and failing to graduate into high-income countries. This is brought about by growth slowdown after sometime.

Avoiding the MIT is an important topic for many Asian emerging economies. This subject will be tackled during the annual Economic Freedom Network (EFN) Asia conference to be held in Bangkok this coming October 21-22, 2013. This writer will be among the participants of that big and important annual international conference.

Here is a chart showing countries in the MIT and those that were able to escape it. 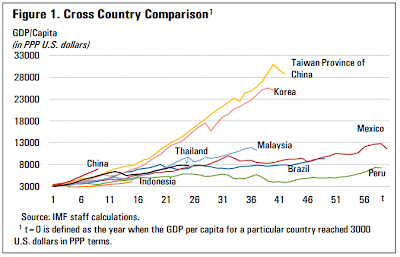 The Asian tiger economiesHong Kong, Singapore, Taiwan and S. Korea, plus oil-rich country Brunei, are able to escape the MIT by growing very fast for two to four decades, before they experienced growth slowdown. By that time, they have already attained the high income country (HIC) status. Below is a list of the major HICs.

And here are the Asian middle-income countries (MICs) which might be pulled in the trap. In the lower batch are some low-income Asian countries aspiring to reach middle income level.

In a paper by Aiyar, Duval, et al mentioned above, they identified what are the factors that can limit or counter growth slowdown. Among the factors they tested are observance of rule of law and limited government. The study showed that

The level of Rule of Law is significant at the 1 percent level: good legal systems, contract enforcement and property rights are strongly associated with a reduced probability of a growth slowdown episode. The Size of Government and Regulation indices are also highly significant but in differences: a country that reduces government involvement in the economy and deregulates its labor, product and credit markets is less likely to slow down in the subsequent period….

Government Size replaces the Rule of Law as the most significant institution variable in levels. It may be that at very low levels of income, the development of a basic framework of property rights and contract enforcement has a large impact in staving off slowdowns, but once this condition is more or less satisfied the capacity of the private sector to grow and innovate becomes relatively more important. The capacity of the private sector to expand may be hampered by the extent of government involvement in the economy, which therefore shows up as significant for MICs (middle income countries). Related to this, the coefficient on Regulation in differences is twice as large for MICs than for the full sample of countries, suggesting again that deregulation is a particularly important channel for guarding against slowdowns in MICs.

The paper also discussed other factors like demography, infrastructure, trade, and macroeconomic environment, as possible explanations to limit growth slowdown.

It is important therefore, for the Asian MICs, those in the upper range already like Malaysia and Thailand, to sustain growth, by limiting their government role and function to promulgating the rule of law, to protect private property rights, and stay away from heavy economic intervention and populism that can restrict business dynamism.

The same lesson can be applied by the low-income countries in Asia to allow them to move to MIC status soon. Attaining an MIC, and later a HIC status, is the single most important achievement that Asian economies must strive, and save their people from poverty and misery.
-------------