Pol. Ideology 51: Liberalism is Not Welfarism 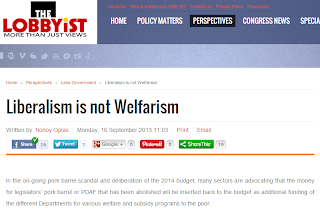 In the on-going pork barrel scandal and deliberation of the 2014 budget, many sectors are advocating that the money for legislators’ pork barrel or PDAF that has been abolished will be inserted back to the budget as additional funding of the different Departments for various welfare and subsidy programs to the poor.

They make this suggestion because they believe that slow but endless expansion of government spending and bureaucracies are fine so long as the poor benefit from it, and that the Liberal government of President Benigno Aquino has promised big anti-poverty programs by controlling corruption.

If the poor have indeed benefited from previous welfare and subsidy programs many years and decades ago, then poverty by now should be small and negligible. This is not the case. What various welfarist and subsidy programs have done many decades ago is to benefit the politicians and the various bureaucracies that receive ever-rising budget and regulatory, prohibition powers.

Many officials and members of the Liberal Party (LP) forget that they are supposed to advance the philosophy of liberalism in their service to the public, not the cousin of socialism which is endless subsidies and no time table welfarism. 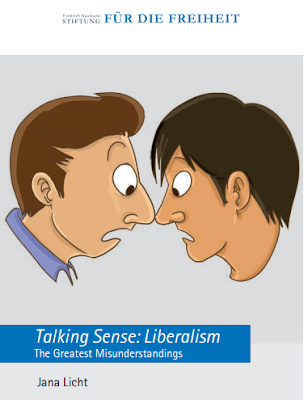 The word “liberalism” has its roots in the Latin words liber, which means “free”, and respectively liberalis, which means “concerning the freedom”; in short: it is all about freedom. Liberalism is a social and political movement with the freedom of the individual as its basic idea, aim and decision guideline….

The core of liberal philosophy is the individual whose freedom must be secured and defended. This should be the highest standard and most important norm of a liberal state. Liberals  do not refuse the state; on the contrary, the state is the guarantor of the freedom. The state and its political as well as economic order must be directed to the freedom of the individual, which is the basis of a humane society. Governmental power must end where the individual freedom is touched. The state is only allowed to come into action if the freedom of an individual is hurt. Its duties are limited to the achievement and the sustainment of freedom and law.

By extension, individuals have the freedom to be hardworking and efficient, or be lazy and inefficient. They have the freedom to be self-reliant, ambitious and responsible, or be dependent, mediocre and irresponsible. Becoming thieves, land grabbers and kidnappers to compensate for their poverty due to laziness or irresponsibility are explicitly disallowed and will be dealt strongly by the State.

In a liberal society therefore, being industrious and self-reliant is rewarded by prosperity while being lazy and dependent is penalized by poverty. Welfarism and forced equality, giving endless and forever subsidies is not a core function of the State in a liberal government.

The economic order in a liberal state is based on free markets and private property. The idea of a liberal economy disapproves overflowing governmental regulation of the markets. This belief is justified by the idea of self-responsibility. Liberals are convinced that individuals are better in organising their economic life than any state authority, because they will always have more information about their individual needs and wants.

So while socialism and welfarism emphasized lots of “rights” – health is a right, education is a right, housing is a right, stable job is a right,… -- liberalism strongly and emphatically emphasize that for every right, there is a corresponding responsibility. Rights and freedom are closely interlinked with responsibility, they cannot be divorced from each other.

This also means that high and multiple taxation of the people’s income and savings as codified into tax laws by the previous governments is wrong. Such high taxation and forced equality is penalizing the hard working and industrious people, while subsidizing the less or non-industrious people, and the various government bureaucracies that do the endless and forever subsidy distribution.

Many taxpayers are angry at the on-going pork barrel scandal, at the large-scale corruption in many government departments and agencies, at the inability of certain agencies like the Commission on Audit (COA) and Congress that are tasked by the Constitution  to check and disallow such wastes and corruption to happen.


It is time for the Liberal government to go back to its core function – to promulgate the rule of law. Punish the wrong doers after a due process, give justice to taxpayers by slowly reducing or abolishing certain taxes and fees that penalize hardwork and efficiency.
-------------