Last night, I joined some friends and staff of the Friedrich Naumann Foundation for Freedom (FNF) in a WahlParty, watching the German elections live, at the German Club in Makati. 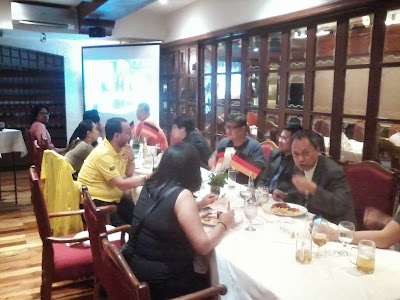 Big defeat for the German liberals, the Free Democratic Party (FDP). A brief analysis of the party defeat from a good German liberal thinker and my former teacher/facilitator at an IAF Seminar in Gummersbach in 2008, Arno Keller below. Posted in German, translated by Bing:

1. The world has not gone under.
2. Liberal values have lost none of their importance.
3. A political party could use Germany. After self-proclaimed "radical Liberals" and apparent liberal opportunists have systematically destroyed the Liberal core of the FDP, the debate on values in the FDP must run new, so that she can once again assume the role of a Liberal Party. Yes, and then also the FDP should recognize that systematic strategy development can actually help.

Chito Gascon was also there last night. His brief analysis:

results from elections in germany are coming in, and it appears to be historic in some key aspects... the conservatives gained more votes and will most certainly return her to the position of chancellor well on the way to being the longest serving woman leader of a major european country... AND, perhaps for the first time since after world war 2, the liberals who have thus far served in government longest as junior partner alternating with either the social democrats or conservatives, may (should the trend be validated) be finding themselves totally out of parliament... by far their worst result ever with them losing 2/3rds of their support compared from the last elections... time for some soul-searching, i hope they are able to bounce back... in the meantime, the conservatives will have a coalition partnership either with the social democrats or the greens or both these parties... the liberal voice will be missed in parliament this governing cycle...i applaud the democratic process... the people have spoken!


A disaster for the FDP yesterday, first time since WW2 and the party founding that they are out of the National Parliament, not a single seat, for failing to get the minimum 5 percent of the votes, they got only 4.8 percent.

Result of the exit poll is almost identical with the actual result. Photo from Spiegel International. 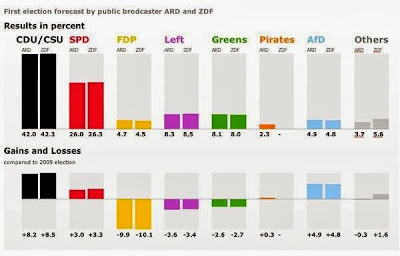 The FDP, which strongly supports human rights, civil liberties, and internationalism, has shifted from the centre to the centre-right over time. Since the 1980s, the party has firmly pushed economic liberalism, and has aligned itself closely to the promotion of free markets and privatisation. 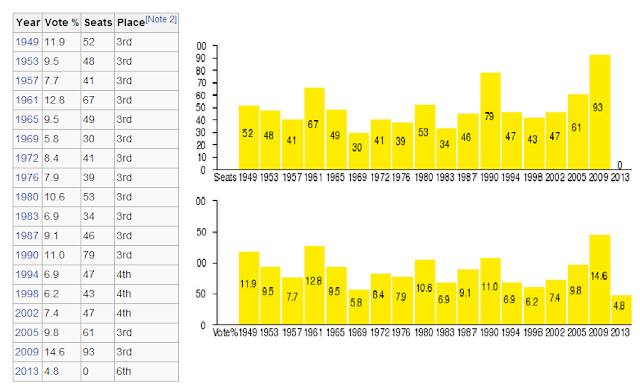 It will be a big soul searching for the FDP and the European liberals. Should they push for more explicit free market policies? A Filipino friend and fellow IAF alumni in Gummersbach, Kareen Oloroso, mentioned last night that many Germans were angry at the liberal /FDP Foreign Minister's plan to cut German foreign aid.

I agree with Arno's analysis above. Liberalism as a philosophy to advance individual freedom and limit the State's coercive power has not lost its value. German liberals in the government made something wrong that turned off many of their supporters.

Meanwhile, a surprising performance by the Alternative for Germany (AfD), an anti-Euro, back to Deutschhmark, other protest party. Formed only in February this year, they got 4.9% of the votes. It is possible that many previous votes for the FDP went to AfD.

While climate alarmist Greens Party was also among the losers, though not as bad as the FDP
http://notrickszone.com/2013/09/22/germanys-green-party-takes-a-beating-in-national-elections-climate-fear-no-longer-issues/
-------------

Update: I like these postings by two FNF guys:

A bitter election result for the German liberals. Yet if the party gives itself a couple of weeks to mourn, and doesn't engage in pointless wars-on-a-square-millimeter or in I-told-you-so intellectualism, there is plenty of modern liberal thinking power, competence and commitment to bounce back convincingly. Simply pull up your sleeves and get going. That will be so good for Germany and for international liberalism.

Time to go to work. Time to make it better. Time to stand for freedom, for equal opportunities, for tolerance, for rule of law, against corruption, for property rights, for personal responsibility and markets that are open to everyone. Time to prove that these core values will create a better society, are standing for development and better living conditions and secure what we achieve. We just got a public demand note to get rid of much dead weight. So let's do it and move on. Time to go to work.
-------------