The on-going pork barrel and government corruption scandal is radicalizing more and more middle class and average taxpayers. Some individuals are getting bolder and explicitly announcing that they will stop paying taxes. Like this story by Sandy Allan Beltran who owns a book shop. She posted this nearly a month ago and look, her story has been shared more than 400x, wow.

See her story below. The other posters I just added, not part of her original fb posting. 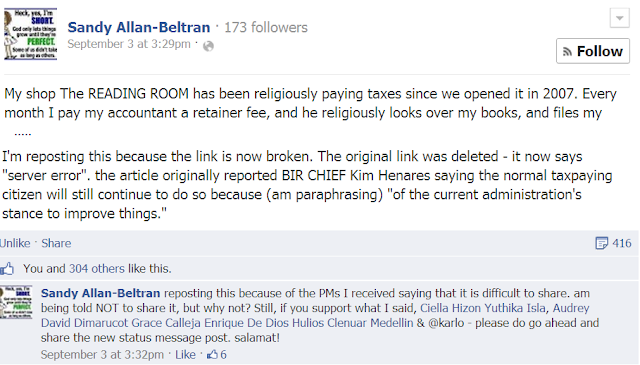 My shop The READING ROOM has been religiously paying taxes since we opened it in 2007. Every month I pay my accountant a retainer fee, and he religiously looks over my books, and files my papers, and at the end of the tax season, or during renewal of licenses, he religiously, zealously even, to the detriment of my wallet & my husband's burdened bank account, pays whatever he sees is my due.

I want to stop paying taxes, because the system has proven itself to be a corrupt one, and I find my moneys to go not to where it will be used for the good of my country or countrymen.

But. If I do so, they will close up my shop. Do I want this? Of course not.

But. It hurts to think that people like the Napoles' and the Revillas and the Marcoses and the Domogans and the Enriles and the Estradas and who knows who else live their undeserved luxurious lifestyles from the hard-earned moneys that I and the rest of my blindly religiously-tax-paying countrymen work our asses off. It makes me so angry to think that corruption is at the core of a government that has consistently failed at taking care of its peoples.

But. Have faith, they say - somewhere there are those who will take your taxes and put it in the right places.

But. It is no longer fair. It would also not be fair to the people I have hired to lose their jobs once I close up shop. They are important to me, as much friends, companions, what I like to call my shop family. It is also unfair to close the shop because there are some customers who have come to love it, come to depend upon it for the "good stuff", items that only I can find and come up with. One client told me "your shop is my splurge haven", and that I can't forget.

But. I've been paying taxes since I was 14 - I sold my first short story to a local women's magazine at that age, and when I got my writer's fee, the government made sure it got its rightful chunk. So for 29 years I have been paying taxes, and in all honesty,

I don't see that it's being used right.

The whole situation has left me speechless, wordless.

Angry. Uncertain. Afraid of the future. Angry because after all this time of doing the basic right thing, it has left me afraid. The government failed to take care of me, one who can, and should demand that things turn around.

So BIR chief whoeveryouare = think again. I'm not going to pay my taxes in the next round. I'm letting go of my accountant. I'm not renewing my shop's license.

But I refuse to pay taxes UNTIL THIS COUNTRY'S GOVERNMENT STARTS DOING THE RIGHT THING.

Am I really going to do this?

I'm so afraid - but I'm more afraid that if I won't, I'll get sick at heart knowing I'm not doing something about it. 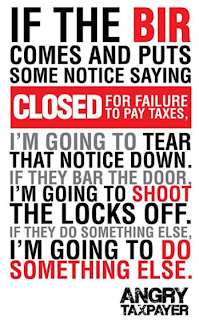 It's already wrong that they stole from me. I refuse that they continue to do so, without any assurance that anyone in the government will make it right.

I will do this, until I'm told, I see, I hear, that something good, something REAL, something changes, and it is proven to me.

I'm reposting this because the link is now broken. The original link was deleted - it now says "server error". the article originally reported BIR CHIEF Kim Henares saying the normal taxpaying citizen will still continue to do so because (am paraphrasing) "of the current administration's stance to improve things."
-------------

I support this citizen expression of anger and dissatisfaction against corruption and government failure. But more than individual expression of disobedience, I think the tax policy should be amended and move to a low, flat tax, with timetable towards the abolition of income tax. Government has lots of consumption-based taxes, transaction taxes, mandatory and regulatory fees to survive. 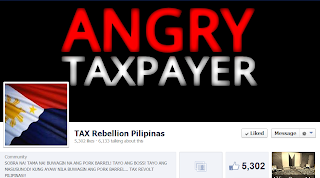 Yes, lets desiminate the information and if we are on this together, they will hear, surely the government will be fearful of having a gov't shut down. In the light of the situation we are in, don't you think this is the only bold response from the people ? Marching wont solve it but it will not hurt so much ... Citizens witholding their tax is painful and scary for any gov't. Reposting this....

Thank you. There are other bold moves to take, but campaigning for a low flat tax, leading to its abolition over the long term, is one such important move.