BWorld 39, Coal and renewables complement each other

In many literatures on energy and environment, electricity and climate policies, the dominant view is that fossil fuels in general, and coal power in particular, are the “enemies” of sustainable development. This should not be the case. The truth is that coal power plays a complementary and not contradictory role to development. Three sets of data will show why.

One, without coal and natural gas, the Philippines will be as dark at night as North Korea and other underdeveloped countries experiencing daily “Earth hours.”

In Luzon grid, coal + natural gas + oil have produced 86.6% of total power generation in the first half of 2015. The “old renewables” hydro and geothermal contributed 12.5% while the “new renewables” wind, solar and biomass contributed only 1.0%, very small.

In the Visayas grid, coal and geothermal provide the bulk of power generation and in Mindanao, it is hydro, oil, and coal. 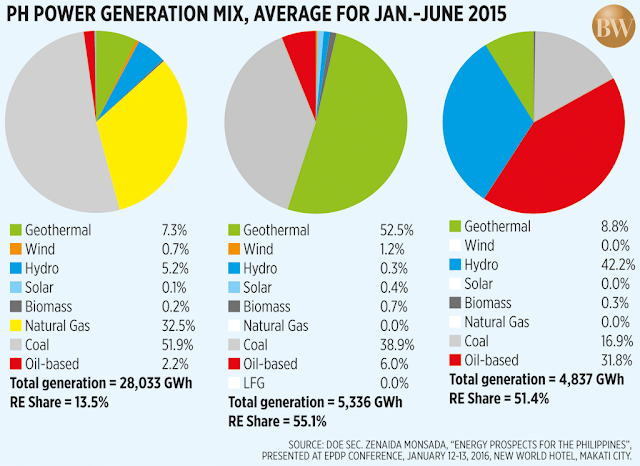 Note that the actual power generation of coal + natural gas of 84.4% are much larger than their power capacity of 61.2% of total dependable capacity in the Luzon grid. This means that power plants that use these two fuel types are producing more electricity at stable supply and cheaper prices than other power plants that use oil and geothermal (stable supply but expensive), hydro (low supply during dry months) and new renewables (unstable supply and expensive). Hence, more power are used and purchased from coal and natural gas plants.

TMO is a peaking plant, meaning it runs only during peak hours of electricity use. Its price is higher because it uses more expensive fuel, diesel, and runs only for one, two or four hours a day, depending on the season or months of the year. Thus, its contribution to total power production is small, only 0.6% in December 2015. 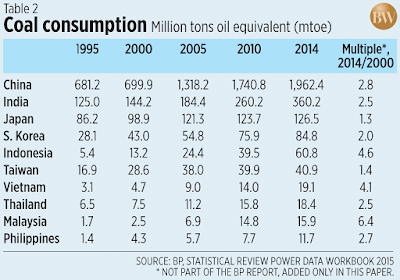 During the recent Energy Policy and Development Program Conference where Energy Secretary Monsada presented at the final plenary, this writer commented during the open forum that the DoE’s target of 30% minimum share of renewables can be a trap and reduce the country’s flexibility to tap cheaper, more stable energy sources like coal.

Such flexibility is necessary in order to (1) address energy poverty (low kWh/capita electricity consumption), and (2) bring down Philippine electricity prices and leave that unhealthy label of having the “second most expensive electricity in Asia next to Japan.”

The claim therefore by some sectors and observers that coal power is the enemy of sustainable growth of the Philippines is based on subjective and non-objective point of view. Their proposal to either (1) limit coal to base load power only, or (2) outright banning of coal and use only renewables (old and new), is based on emotionalism and alarmism.

When many streets and houses are dark at night because local governments and households are saving on their monthly electricity bills, there are at least three negative social consequences: more vehicular accidents, more criminal activity, and more fires when more people use candles more frequently.

These are crimes against humanity and the poor especially that the “limit/kill coal” movement does not take into serious consideration.

Adding more renewables to the energy mix is good and healthy for the economy so long as no subsidies are provided like feed in tariff (FIT) and no “must/priority dispatch” policy via the renewable portfolio standards (RPS).

The government must avoid politicizing the pricing and dispatch of electricity. Instead, it must encourage the entry of more power plants using different types of fuel, whether local or foreign. More competition among more players is the best way to protect the public via stable supply and cheaper, affordable electricity prices.

Bienvenido Oplas, Jr. is the head of Minimal Government Thinkers, and a Fellow of both the South East Asia Network for Development (SEANET) and the Stratbase-Albert del Rosario Institute (ADRi).
-------------