The Trans Pacific Partnership (TPP) Agreement is expected to become operational and implemented around 2-3 years from now, when all the 12 member-countries have ratified the deal. The idea of zero tariff for many products among members is attractive enough. Meaning companies located in any member-country can buy from, and sell to, other members at zero, free trade prices.


"The reduction in the trade barriers within the TPP (with or without Philippine participation) results in trade creation within the TPP and trade diversion from the non-TPP...

The model results show that TPP participation will lead to an overall welfare gain for the Philippines. But the gain can potentially be higher. The analysis in the paper only considers additional yearly FDI inflows of US$1 billion over a 10-year period. While these inflows will improve the economy’s position relative to the FDI frontier..."

Potential Economic Effects on the Philippines of the Trans-Pacific Partnership (TPP)
by Caesar B. Cororaton and David Orden
Revised February 2015
(54 pages) http://www.gii.ncr.vt.edu/docs/GII_WP2014-3.pdf

"Thailand is highly interested in joining TPP ...," Somkid Jatusripitak told a news conference in Tokyo. "Chances are high that Thailand will seek to join TPP."

Somkid, the country's economic tsar, said the government was analysing the impact of joining the trade deal, particularly on sensitive issues like agriculture and pharmaceuticals...."
Nov. 27, 2015, http://uk.mobile.reuters.com/art.../idUKKBN0TG0I620151127...

"Indonesia should join the Trans-Pacific Partnership (TPP) as a way to promote structural reform. Such reform would include restructuring state-owned enterprises (SOEs), improving the investment climate, improving economic efficiency and productivity to create jobs for the nation’s surplus labor and promoting exports. The spectacular experience of East Asia indicates that East Asian countries have become more developed and prosperous during the past 60 years mainly due to their greater penetration into international markets through trade and incoming private investment."
December 07, 2015, http://m.thejakartapost.com/.../benefits-trans-pacific...

"Under the agreement, companies can gain substantial benefits from being located in TPP member countries and selling goods and services into other TPP member markets.

The most obvious change in a post-TPP world will be the reduction of tariffs. On the date of entry into force of the agreement, 90% of all goods tariffs in all 12 members will drop overnight to zero. The remaining tariffs will also drop, over time, with many eventually becoming duty free.

The tariff reductions mean that firms may no longer have to contend with tariff peaks—specific items or sectors where tariffs can easily reach 30, 50, or 150%. In many of these markets, companies hoping to export products have not been competitive. With the reduction in tariffs, new TPP markets should now be attractive to many firms." -- Deborah Elms, Dec. 10, 2015,
http://www.asiantradecentre.org/.../using-the-trans...

“The big winners on trade are likely to be the big winners on investment, especially over a 10-year period,” says Dr Gary Hufbauer, a senior fellow at the Peterson Institute for International Economics in Washington, DC.

In percentage terms, Mr Hufbauer expects Vietnam to be a big winner in both categories because it is coming from far behind the rest of the field. In addition, its tariffs on many imports – among the highest in the TPP trade area – will be lowered or eliminated. To get the maximum benefit from the TPP, Mr Hufbauer says Vietnam will need better technology and financial services, both of which will require FDI. “If Vietnam carries through on the reforms in the TPP, it will get a ton of investment,” he says.
Dec. 10, 2015, http://www.fdiintelligence.com/.../Vietnam-and-Malaysia...

"Japan, Vietnam and Malaysia are set to get a big economic boost from a sweeping Pacific trade agreement concluded in October, while the U.S. and other North American countries would see much smaller gains from the Trans-Pacific Partnership, according to the first detailed study of the pact."
Jan. 6, 2016, http://www.wsj.com/.../pacific-trade-pact-set-to-give-big...

"Being a part of the TPP is a significant component of our international trade strategy which has been in place over the past four years, the newly appointed Cabinet official said.
“Some estimated it may take another two years for the TPP to take effect, because there are provisions that lay down some conditions before it could take effect,” he said.
Jan. 7, 2016, http://www.manilatimes.net/cristobal-ph-certain.../238289/

"The 12 nations agreed to a deal that, if implemented, would not only reduce or eliminate tariffs but rein in the advantages of state-owned enterprises and impose binding environmental standards.

Even though Beijing isn’t part of the deal, Obama administration officials say the rules will still challenge China to reform its economy in other ways. The TPP, endorsed by many former military officers, would also boost Washington’s ties with its allies in the region a time when China is flexing its economic and military muscles."
Jan. 12, 2016,  http://blogs.wsj.com/.../will-the-pacific-trade-pact.../ 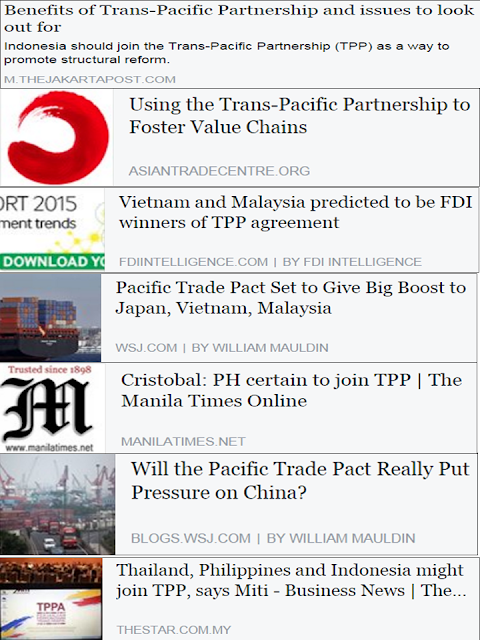 "Thailand, the Philippines and Indonesia have actually expressed interest to be part of the Trans-Pacific Partnership Agreement (TPPA), said the International Trade and Industry Ministry (Miti).

Miti said this in its written response to issues raised by Dr Jomo Kwame Sundaram recently that countries such as Thailand and the Philippines had opted to distance themselves from this treaty."
Jan. 14, 2016, http://www.thestar.com.my/.../thailand-philippines-and.../
------------