I am reposting an interview by the Economic Freedom Network (EFN) Asia of Andrew Work (AW). Andrew is the Publisher and Editor-in-Chief of Harbour Times (HT), the flagship of New Work Media. Before creating the HT, he was the Exec. Director of The Canadian Chamber of Commerce in Hong Kong for a few years. And before that, he was a co-founder and founding Exec. Director of The Lion Rock Institute (LRI), Hong Kong’s first free market think tank, born in 2004. 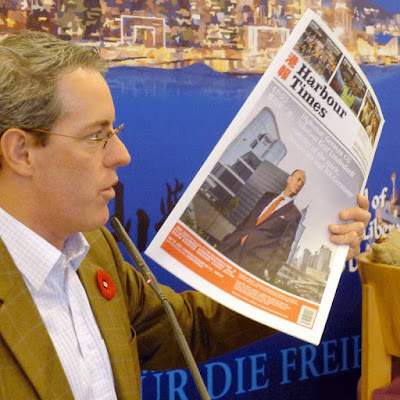 Andrew holding a copy of the HT, thanks to Olaf K. for this photo. Andrew is a friend since 2004. Met him first time in Michigan for the Mackinac Leadership Conference, then at the Atlas Liberty Forum in Chicago, then in several meetings in Washington DC, then at the EFN Asia conference in Hong Kong, October 2004.

EFN: World War II put an end to the opium trade. How did that affect Hong Kong?

AW: At that point Hong Kong had already established itself as an important Asian trade center and the people of Hong Kong, their jobs, incomes and prosperity very much depended on the flow of goods through the harbour. And this meant that Hong Kong’s DNA remained free of policies that, for example, aim to protect local industries from foreign competition through taxation. Hong Kong was always wide-open for trade, only few goods were subject to import duties. And in some cases abolishing such import duties has even proved beneficial.

AW: Well, a recent example would be the de facto elimination in 2008 of the import duty on wine. The duty was actually not abolished, but reduced from 60% to 0%. This has had a tremendous effect: Within only one year the total value of wine traded in Hong Kong doubled. Practically overnight the city became Asia’s trade and auction hub for fine wine. This has turned out to be immensely profitable and has led to the creation of new infrastructure – such as special warehouses – and jobs. In effect an entirely new industry sector has emerged within the blink of an eye.

EFN: In Europe we are witnessing a rather emotional debate about the Transatlantic Trade and Investment Partnership (TTIP). Here in Asia negotiations over the Trans-Pacific Partnership (TPP) were concluded last year. In how far are free trade agreements relevant to Hong Kong?

AW:  FTAs mainly deal, and I am simplifying a bit here, with the mutual dismantling of tariff and non-tariff trade barriers. There’s not much to dismantle in Hong Kong in that regard. But Hong Kong has negotiated a couple of FTAs during the past few years, for example the ones with EFTA and Chile, and the Closer Economic Partnership Agreement (CEPA) with China. While, on the face of it, signing CEPA didn’t make that much difference at first, its later iterations tackled some issues of importance to Hong Kong. One example would be the mutual recognition of academic titles and professional qualifications.

The reduction of barriers within the framework of CEPA could be beneficial – both for foreign professionals who want to settle in Hong Kong and for Hong Kongers who wish to offer services in mainland China.

Many restrictions remain on offering services in Hong Kong. The Medical Council of Hong Kong makes it very hard for foreign physicians to settle in Hong Kong and offer medical services. The same applies to foreign lawyers. In my view these are unnecessary restrictions that reduce consumer options.

As far as TPP is concerned, I am convinced that Hong Kong will profit immensely, even though it is not a part of the treaty. Hong Kong very much depends on world trade. If trade is flourishing, Hong Kong prospers.

EFN: What are the long-term prospects of Hong Kong?

AW: That very much depends on how Hong Kong will elect its Chief Executive (CE). Hong Kong’s constitution, the Basic Law, is in many regards a fantastic legal document. But unfortunately it vests the Chief Executive with a lot of power. Let me give you an example: Suppose you want to file a complaint against the police. You would then turn to the Independent Police Complaints Council. Its members are appointed by the Chief Executive. But he [the CE] also appoints the police chief and has the final say on nominations to the High Court. Furthermore, the Chief Executive appoints the head of Hong Kong’s anti-corruption commission. This goes to show that too many institutions depend on the CE, a person who in theory has two masters: The people of Hong Kong and Beijing. But ultimately all important decisions are made by Beijing.

EFN: So, in a manner of speaking, very much depends on whether China understands Hong Kong or not?

AW: Precisely; unfortunately right now it seems that the leadership in Beijing shows little understanding of Hong Kong. Beijing doesn’t appreciate that the more they meddle in Hong Kong’s affairs, the more opposition they will face. Some people might simply decide to pack their stuff and leave. And these are dire prospects. Hong Kong became rich because the city was always allowed to do what lay in its interest. Hong Kong experienced rapid economic growth and lifted millions out of poverty long before China started to catch up. But this is a view that is not shared on the mainland. In China, the perception prevails that Hong Kong owes its wealth to China alone. I have the feeling that, if in doubt, Beijing has more interest in exerting control over Hong Kong than seeing the city prosper. The thinking seems to be: If China isn’t perceived as being in full control of Hong Kong, other regions on the mainland might become restive as well.