Some people think that the US financial turmoil in 2008-2009 was caused by free market or less government policies, that none of the major players responsible were arrested, and that the US taxpayers bailed out the fraudulent corporate system.

Recall that in the literatures of the free marketers, almost all of them said one thing -- zero bail out, let those erring big banks and firms go bankrupt. Capitalism without failure and bankruptcy is like religion without sin. This chart below, I got from the web. 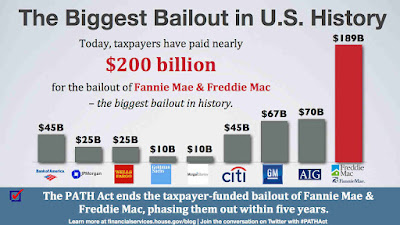 Business should be kept in the private sector as much possible and government should only lay down fair  and  transparent rules that apply to all players, and stay away from being businessman itself. In real capitalism, there is competition, almost anywhere, almost anytime. Then there will be success and failures; expansion and bankruptcy. 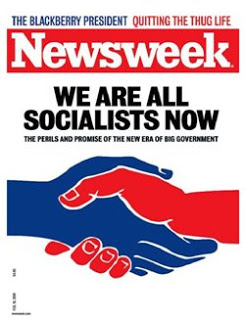 In cronyism type of business, bad companies get bailed out. Or a better term perhaps is that bad companies are protected from competition by good and efficient companies. There are so many government-created monopolies, area-specific monopolies like electricity distributors (Meralco + 120 other electric cooperatives), all water companies, etc. Some industries are duopoly like telecom.

The potentially good company/ies is/are prohibited, banned, disallowed by the government to compete and teach a bad local company a lesson. Via the Constitution (restrictions on foreign equity investments), via Congressional franchise, via Executive franchise (CAB, MARINA, LTFRB, NTC,...), via LGU franchise or business permit.

At least two schools of thought on government dealing with big players experiencing serious corporate crisis.  (1) bail them out, postpone the day of reckoning, and (2) let them fail, let the economy sort it out. Trying to balance both would exacerbate the situation.

Option (2) is always the optimal one. Capitalism without bankruptcy and failure is like religion without sin. So corporate expansion and bankruptcy are 100% part of the DNA of capitalism. When a government plays God and decides who should stay and who should go bankrupt, that economy is moving towards statism, even socialism.

Besides, when a corporation goes bankrupt, someone else will buy it, cheap of course, use or rehabilitate the useful assets, even assume the debts and liabilities, rehabilitate and turn it around, and manage or sell it for a profit. Bailing out a corp., public or private, using taxpayers' money is always wrong.

Monopoly greed also occurs at the poorer/poorest sectors of the economy. Like a jeepney route monopoly (given by LTFRB) -- air-con vans, buses are prohibited from plying their route and get passengers. Or tricycle route monopoly (given by LGUs) -- jeepneys, air-con vans, mini-buses are prohibited from plying their route. Passengers have only two options, take a cab or Uber, or drive their own cars.

I entered UP, graduated in the mid-80s or more than 3 decades ago. The jeepneys monopolized the Philcoa-UP or Quezon Ave-UP route. Ok lang noon, no internet, no fb, etc. Now with all the modernity, those routes are still jeepney monopoly? Students and staff have no other choice but take the cab/Grab/Uber, drive their own cars? Air-con vans, buses still prohibited in UP?