China Watch 22, On many rich Chinese leaving their country

China implosion, it will happen because people and nature hate heavy restrictions and dictatorship. This event will have huge impact on the rest of the world especially in Asia. Not soon, but a few decades now. 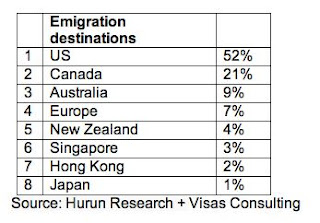 On June 5, 2014, Fortune made this headline, Why China’s rich are leaving and showed this table.

The top 3 reasons why rich Chinese leave their country, based on the Hurum-Visa survey are: (1) better options for their children’s education; (2) distressed about growing pollution problems; and (3) concerned about food safety in the country.

(2) "China's failure lies not in the structure of its dairy industry but in the structure of its economy.... That contamination incident happened partly because China's safety regulatory apparatus remains weak and its unfree press can't serve as a watchdog. Rule of law is too erratic—to put it kindly—to function as an effective check on bad behavior."
-- Joe Sternberg, July 16, 2014, http://online.wsj.com/.../joseph-sternberg-the-milk-of...

(3) "He even called on cadres to allow for a little dissent if necessary.
We should push ahead with reform and opening up without hesitation,

"Xi said cadres should have the political will to try new initiatives, and in remarks that signal that his massive anti-corruption campaign would continue, he said cadres should set aside their personal feelings and even hire people who had opposing views."
August 20, 2014, http://www.scmp.com/.../xi-says-china-must-not-deteron...

Interesting development. Foreign direct investments (FDI) to and from China was negative, meaning FDI inflows were lower than outflows. Chinese businessmen and state-owned enterprises are investing more abroad -- mainly in the US, EU, Japan. This means what?

a. Labor costs, taxes, bureaucracies, corruption, etc. are rising fast in China, investors would rather do business outside, or
b. Strategic move to further internationalize China capitalism guided by socialist dictatorship. Or
c. Generation of pacifist, trade- and business-oriented communist leaders are rising. The hawks and war-mongers in the Communist Party are shouting their last Hurrah via more militarism and provocation of their neighbors to say they are not losing in the party.

(5) "According to a Barclays survey, which polled over 2,000 Chinese residents with a total net worth greater than $1.5 billion million, 47 percent of Chinese respondents said that they wanted to move abroad in the next five years, compared to a global average of 29 percent."
Sept. 15, 2014, http://shanghaiist.com/.../study-nearly-half-of-wealthy...

This news is consistent with the previous news report. Many rich Chinese want to experience more individual freedom, something that they cannot enjoy inside China, even if they are very close to the Communist party leaders.

(6) "Democracy is defined not only by people's right to vote in an election but also the right to participate in political affairs on a daily basis," Xinhua quoted Xi as saying. "Democracy is not a decoration … it's for solving people's problems."
Sept. 22, 2014, http://www.scmp.com/.../democracy-not-decoration-xi... 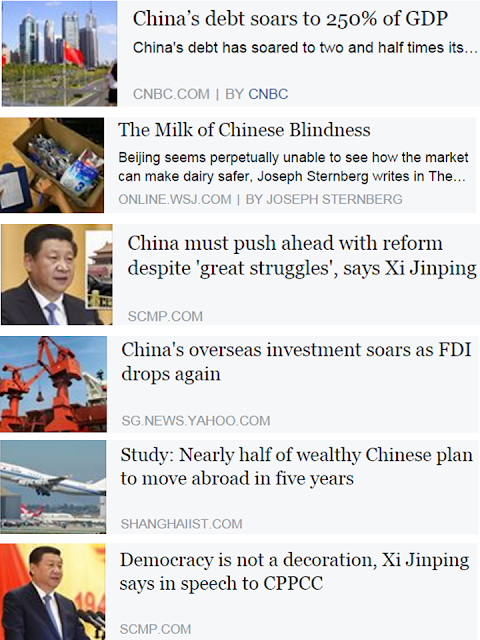 "About 30 Chinese officials, including managers of state-owned companies, are known to have committed suicide this year. Among them were several high-profile cadres under investigation for graft... entrepreneurs and private company managers are under greater stress as the economy slows. Last year more than 80 businessmen committed suicide in a six-month period in the city of Wenzhou alone.

"Entrepreneurs complain that making a fortune paints a bull's-eye on your back. Hence the so-called "curse of the rich list." Unlike in most countries, China's most successful tycoons don't want to be ranked among the country's wealthiest individuals, since honorees tend to find themselves ruined or in handcuffs.

"China's culture of corruption and abuse of power is a major reason so many of the country's rich want to leave. A Barclays BARC.LN -1.07% survey released Monday found that 47% of Chinese with more than $1.5 million in assets are planning to emigrate, and this is consistent with past research. Developed-country programs that allow investors to essentially buy residency continue to attract waves of Chinese.

(1) Greying communist party officials of China have their kids studying in the US, Canada, UK, Australia, etc. When they come back and become CP leaders soon, they will be tolerant of democracy, tolerant of political pluralism. And China's one-party system will implode and collapse.

(2) China internal dissent is larger than what we know or read in media. China's external bullying is partly a diversionary tactic, to create "external enemies" and hope to consolidate internally, to rally nationalism. Such internal dissent started in Tiananmen 27 years ago, or even earlier. The stabbings, massacres, riots in some restive regions, they look "scattered" and uncoordinated, but they may be wide and deep.

(3) If China implode someday, it will break up into several countries and governments, the main country may remain under the communist party. Similar to what happened in the former USSR, it broke up into many new and smaller countries, but the bulk of the country remained as Russia.
--------------