The Chicago Climate Exchange (CCX), dubbed to be the house of carbon cap and trade in the US if the US Congress approved the bill on the subject, closed shop this week. No more big market for carbon rent-seeking in the US. Here's a portion of the report from Fox News the other day:

The closing this week of the Chicago Climate Exchange, which was envisioned to be the key player in the trillion-dollar "cap and trade" market, was the final nail in the coffin of the Obama administration's effort to pass the controversial program meant to combat global warming.

"It is dead for the foreseeable future," said Myron Ebell, director of the Center for Energy and the Environment with the Competitive Energy Institute, which had fought the measure. 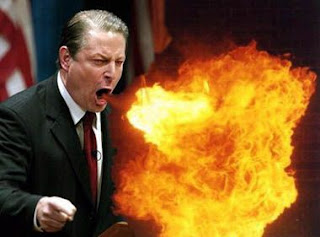 And interestingly, "Al Gore's Generation Investment Management LLP pocketed approximately $17.8 million on it's 2.98% share of the exchange when it was sold to the publicly traded Intercontinental Exchange a mere 6 months ago..." according to the Hockeyschtick blog.

With the on-going global cooling, it is hard to keep blaming human emission of CO2 as the "unequivocal" cause of man-made warming. CO2 level in the atmosphere keeps rising while global temperature is on a roller-coaster ride of warming-cooling cycles. 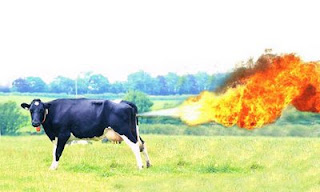 Perhaps the animal kingdom like cows, will be blamed. They emit lots of CO2 when they exhale and lots of methane when their behind "exhale".
Posted by Bienvenido Oplas Jr at 7:07 PM

Sesame Street quiz: Find the common element in the two photos.
(Hint: it's not the flames.)