Criminals 5: One Year of Maguindanao Massacre 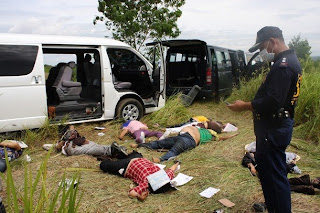 Today will be the 1st year anniversary of the heinous "Maguindanao massacre" where 57 people were killed in close range, in broad daylight, by the Ampatuan clan of Maguindanao province. The victims were the family members of a rival but smaller political clan of the Ampatuans, the Mangudadatu, their friends, members of media who accompanied the group, and some hapless civilians who just happened to pass by.

This was my reply to them, 3 days after the massacre:

Hi Jo and all,

Thanks for the note. The massacre happened in Maguindanao province, in the southern island of Mindanao. It's far from Manila, so we are ok.

It's pure rule of men, zero rule of law. The perpetrators, the Ampatuan family, are an "untouchable" political clan in the province. The governor ran unopposed, his 1 or 2 sons are mayors of other municipalities in the province. 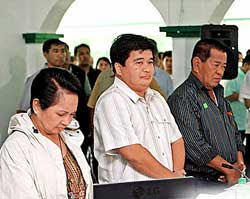 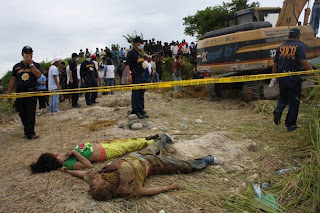 So 4 days after the massacre, 57 bodies so far recovered, there should be more, 18 were media people. Some victims were tortured. For instance, the wife of the politician intending to run for governor and challenge the Ampatuan clan, was severely tortured. Pardon the graphics but this is how barbaric those thugs are: They slashed her organ several times, slashed her breasts, gouged her eyes, shot her mouth and head, chopped the feet, etc. The sister and niece of the potential candidate suffered tortures as well, before they were killed.

A group of innocent motorists who were unlucky to be following the 5-cars convoy of the victims by just a few minutes, were also killed. One car contained all employees of a municipal hall in the nearby town. 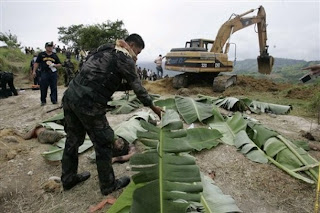 The 57 bodies plus at least 3 vehicles were buried deep in an isolated place using a backhoe owned by the province, with the name of the provincial governor, Mr. Ampatuan, boldly painted in it. When the army came looking for the missing convoy, the operators of the backhoe and the armed men fled.

Almost everyone here in the Philippines is angry, especially the media. The Federation of Intl Journalists has declared yesterday that in terms of threat to media and casualty of media people, Philippines is now 1st, Iraq is 2nd. 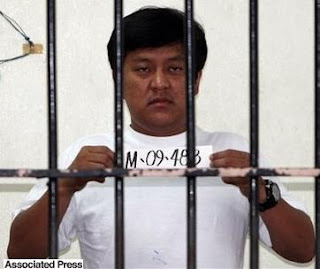 A few weeks after the massacre, Mr. Andal Ampatuan, the main suspect as the one who ordered the massacre, the son of the Governor then, and purported to run for Governor to replace his father whose 3rd term was going to expire, was arrested. Several other Ampatuans were arrested in the succeeding weeks.

But still, the rule of law still has to be promulgated in this case. Slow procedures in the justice system, the perpetrators have not been convicted with finality. 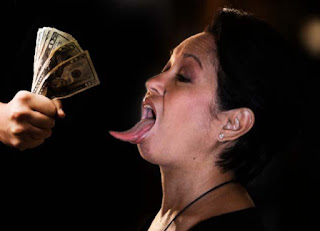 The rule of men -- men who are above the law, people who are exempted from the elementary laws against killing, against massacre, and there are people in government who made such exception -- still prevails.

The sooner that this case is closed, that the perpetrators are convicted and given the maximum penalty, like being sent to the electric chair and electrocuted to death publicly, the clearer the signal that the current administration is serious in promulgating the rule of law.
------