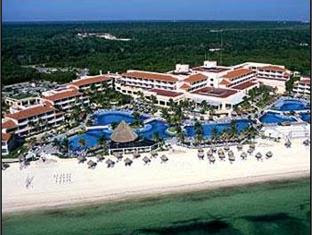 This is the Moon Palace Hotel in Cancun, Mexico, where thousands of climate officials, bureaucrats, environmentalist NGO leaders, media, and others started meeting since yesterday up to December 10, 2010. Huge and extravagant, there should be several tons of carbon emission and global warming molecules that the participants should leave in order to fight man-made warming. 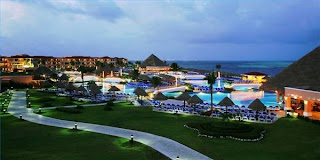 Moon Palace Hotel should be one of the showcases of Cancun capitalism. Capitalism, profit motive, extravagant lifestyle by the super-rich and super-bureaucrats, are alive and well in this beautiful resort. 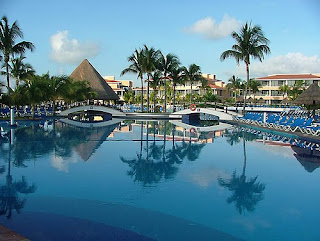 The planet is burning and getting warmer and warmer, so saviours of the planet should refresh themselves and plunge into these nice and luxurious swimming pools of the hotel. Then they can resume inventing new environmental regulations and new energy taxation to fight "man-made warming." Government and UN climate bureaucrats of course won't pay for this luxurious hotel out of their own pockets. It's taxpayers from many countries who will shoulder the bill, who else.

Additional pictures about the Cancun meeting at http://motls.blogspot.com/2010/11/climate-conferences-is-beginning-in.html 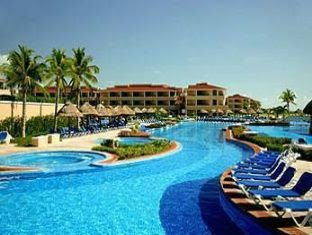 How costly are these meetings? Here are some data: Cancun conference, 2010: cost about 841 million Mexican pesos ($67.33 million) to the Mexican government.
Copenhagen summit, 2009: the Danish finance ministry said total costs were about 1.2 billion Danish Krone ($213.3 million). Bills of delegates not included yet.

Estimated number of participants: Cancun, 2010: Mexican authorities expect up to 22,000 people, including 9,000 official delegates plus journalists, environmentalists and others.
Copenhagen, 2009: more than 45,000 delegates and observers. Data from The Telegraph

The opening program of the UN FCCC 16th Conference of Parties (COP 16) meeting yesterday. Some warming scientists painted even worse scenario of man-made warming there. Here's one report from The Telegraph:

In one paper Professor Kevin Anderson, Director of the Tyndall Centre for Climate Change Research, said the only way to reduce global emissions enough, while allowing the poor nations to continue to grow, is to halt economic growth in the rich world over the next twenty years... “The Second World War and the concept of rationing is something we need to seriously consider if we are to address the scale of the problem we face,” he said."

And just how effective was Kyotoism in fighting "man-made warming"? Here's one summary, from The Hockey Schtick,

Meanwhile, the warming-cooling-warming-cooling climate cycle of planet Earth now points towards global cooling, not warming. This is seen from the PDO index until this month. Graph source is http://www1.ncdc.noaa.gov/pub/data/cmb/teleconnections/pdo-f-pg.gif Where is the causality between more CO2 emission (and "more warming") and the plunge in global temperature? 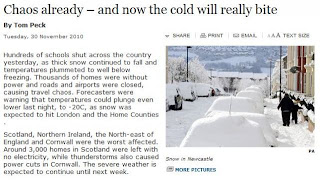 Yesterday, UK was blanketed by thick snow. The severe cold that descended at the Northern Hemisphere from the Arctic has thrown many European countries into deep freeze. Sweden for instance suffered up to -36 C severe cold last week.

The severe cold has also descended in Asia already. Last week, Snow in China arrives 40 days early. Up to a meter of snow were recorded in some areas.

Terrible man-made global warming ahead of us.
Posted by Bienvenido Oplas Jr at 4:36 PM

$96 Trillion per degree C by 2050? IIRC, that's several times the total damage to the planet's economy by unrestrained 3°C warming by 2100 according to Prof. Nordhaus' DICE model.

The distinction between mitigation and P-ing the money down the drain is that the latter would be more beneficial.

With current global cooling trend, many countries in the Northern Hemisphere would wish to have at least 1 C warming. And they can save their taxpayers from senseless additional carbon taxation.