For many infectious, communicable and pediatric diseases and measures to control them, there is a role for government. Although isolation of the patient from the rest of population is an effective way to control and limit further spread of the diseases, continued research, understanding and treatment of these diseases, large scale immunization when effective medications are available, are also important.

Sharing two articles below by Reiner Gloor of PHAP, in his weekly columns in BusinessWorld, on (a) on hand, foot and mouth disease and EV 71, and (b) meningococcemia or meningococcal septicemia. Toxins enter the blood, blood vessels are broken, and rashes or brownish spots occur.

Photos below, upper half are symptoms and effects of HFMD and EV 71; lower half photos are effects of  meningococcemia which, if not properly treated, can result in death within 24 hours of the patient. Scary infectious diseases that generally attack children. 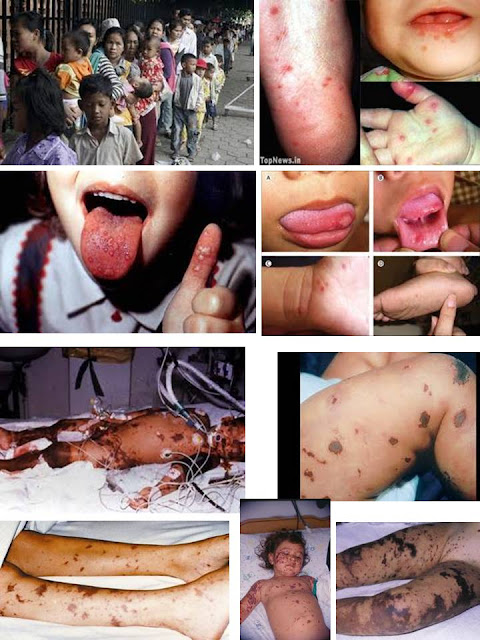 Mystery no more. This, after the Ministry of Health (MoH) in Cambodia and the World Health Organization (WHO) concluded that a severe form of Hand, Food and Mouth Disease (HFMD) caused the death of about 54 children mostly under three years old.

A joint investigation with support from WHO, the Institut Pasteur du Cambodge, and the US Centers for Disease Control and Prevention (CDC) was launched after the Kantha Bopha Children’s hospital reported an unusually high number of illnesses and deaths among young children since April.

The WHO explained that HFMD is a common viral illness that mostly affects infants and children below five years old. HFMD is usually a mild disease, and nearly all patients recover in seven to 10 days without medical treatment. It is most commonly caused by coxsackievirus A16 which usually results in a mild self-limiting disease with few complications.

The CDC said that HFMD usually starts with a fever, poor appetite, a vague feeling of being unwell, and sore throat. One or two days after fever starts, painful sores develop usually in the back of the mouth which begins as small red spots that blister and often become ulcers. A skin rash then develops on the palms of the hands and soles of the feet or on the knees, elbows, buttocks or genital area.

The CDC reminded that persons infected may not get all the symptoms of the disease. They may only get the mouth sore or skin rash.

HFMD is different from foot-and-mouth disease (FMD) that affects cattle, sheep, and pigs. The diseases are caused by different viruses and are not related.

Individual cases occur worldwide while outbreaks in tropical and subtropical countries often occur year-round. While outbreaks have been reported around the world, the WHO observed that they have occurred more in Asia. Countries with recent large increases in the number of reported cases are China, Japan, Hong Kong, Republic of Korea, Malaysia, Singapore, Thailand, Taiwan, and Vietnam. For instance, China reported 1,271,535 cases with 356 deaths up to the end of June. Meanwhile, about 259 were hospitalized in Hong Kong, and some 1,074 cases were reported in Macau.

In Japan, the WHO said that the trend has been increasing over recent weeks with 13,916 cases being reported up to July 1. In Vietnam, 63,780 cases with 34 deaths have been reported from across 63 provinces, while Singapore reported 26,317 cases.

In the Philippines, Health Secretary Enrique T. Ona instructed the Department of Health (DoH) National Epidemiology Center to include EV-71 infection as a notifiable disease in the country where all health providers particularly physicians must report individual cases or even outbreaks. The Bureau of Quarantine was also placed on alert in the conduct of its routine screening for arriving passengers in the country’s various ports.

The DoH said that EV-71 infections occur in the country but are reported with irregularity. The fatal EV-71 infection is still very rare in the Philippines.

The WHO reminded that there is no specific treatment available for HFMD. Instead, patients should drink plenty of water and may require symptomatic treatment to reduce fever and pain from ulcers.

The Joint Statement revealed that the cases in Cambodia were from 14 provinces and many of the children were given steroids at some point during their illness. However, steroid use has been shown to worsen the condition of patients with EV-71.

There are also no specific antiviral drugs or vaccines available against non-polio enteroviruses causing HFMD. On the other hand, good hygiene as well as monitoring a sick child’s condition and seeking immediate medical attention for those showing severe symptoms can lower the risk of infection.

Preventive measures include frequent hand washing with soap and water, particularly after touching any blister or sore, before preparing food and eating, before feeding young infants, after using the toilet and after changing diapers. It is also important to clean contaminated surfaces and soiled items, including toys, with soap and water, and then disinfecting them.

Since HFMD is an infectious disease, keeping infants and sick children away from school or gatherings until they are well is necessary. Avoiding close contact with children with HFMD is also important. It will also be helpful to maintain cleanliness. (For more information about the disease, go to www.who.int).

Many Filipinos with a family member working overseas would identify with the speech of a young, talented Filipina who won in an international public speaking competition in London a few years ago.

The speech centered on a borderless world, a topic fitting for a country with an estimated 11 million of its people living or working abroad.

While there is continued debate on the benefits and ill effects of the outbound migration trend in general, health experts are on alert against the spread of emerging infectious diseases.

The World Health Organization (WHO) established the Asia Pacific Strategy for Emerging Diseases with the goal of improving health protection in the Asia-Pacific Region through productive partnerships for preparedness planning, prevention, prompt detection, characterization, and the containment and control of emerging infectious diseases.

The WHO defined emerging diseases as “infections diseases that newly appear in a population” like the severe acute respiratory syndrome and the avian influenza as well as those that are known communicable diseases such as dengue, typhoid fever, cholera, leptospirosis and meningococcal diseases that continue to occur regularly in the region.

In the Philippines, 32 out of 98 people died due to meningococcal disease from October 2004 to January 2005. Unfortunately, this disease also resulted in negative economic impact on tourism, travel and trade for the provinces involved.

By end of December 2010, the Philippines reported 77 cases of meningococcal disease with 17 deaths, with the highest incidence coming from those below four years old. There have been 1,458 reported cases of bacterial meningitis in the Philippines, with 130 deaths. A life-threatening condition, invasive meningococcal disease (IMD) is highly infectious and progresses rapidly, resulting in death within hours if not immediately recognized and treated, explained Dr. David Johnson, senior director for global medical affairs at Sanofi Pasteur.

Symptoms are similar to those of more common viral illnesses but when that lethal bacteria which causes meningococcal disease invades your body, it can claim your life in just 24 hours. IMD is difficult to recognize, especially in the early stages because the signs are nonspecific in the first six hours.

IMD is a serious bacterial infection that can lead to meningococcal meningitis (swelling of the lining of the brain or spinal cord), meningococcemia (septicemia or blood infection), or pneumonia.

Dr. Johnson added that meningitis may cause devastating consequences such as loss of hearing, blindness and brain injury, if not death. Meningococcemia is more alarming as it is the most severe form of IMD. When the bacteria enters the bloodstream, they multiply uncontrollably, damaging the walls of the blood vessels and causing the appearance of hemorrhagic rash. This can lead to death within hours.

Dr. Lulu Bravo, vice-chancellor for research and executive director of the National Institutes of Health at the University of the Philippines Manila, has warned that IMD is one of the most lethal infectious diseases because of the terrifying speed with which it can kill or maim.

In a recent forum, she stressed that what is more alarming is that infants and small children are the most vulnerable to meningitis.

Dr. May Montellano, vice-president of the International Society for Tropical Pediatrics, explained in the same forum that when IMD strikes, the likelihood of dying is high at 30% in cases that are not treated immediately. Mortality rate for meningococcemia can be as high as 40%. For survivors, two out of 10 may suffer from permanent disabilities such as deafness, blindness, mental retardation, seizure disorder, paralysis and loss of limbs due to lack of blood circulation in the extremities of the body.

The disease can be spread through common everyday activities such as crowding, living in close quarters like dormitories or summer camps, and kissing. Transmission of the bacteria occurs through airborne respiratory droplets expelled by infected people or through healthy asymptomatic carriers.

Determined to contribute in the fight against these diseases, the pharmaceutical industry continues its innovation in vaccination which leads to more advances in preventive medicine. Research efforts are bolstered by new technologies, which open new avenues of research and speed up the development of new vaccines. These innovations have helped reduce, if not eliminate, health burdens that were once prevalent around the world.