One of the regular readers of this blog is Mr. Micky Fernandez, http://mickyandrani.blogspot.in/, an American expat in India. After reading my brief debate with Marc Abela last week, Pol. Ideology 33: Anarchy or Minarchy, he posted this frank and well-argued paper today in his blog. I wanted to drop a comment in his paper but I cannot see the "comments" button, so I will write it after his paper. Here goes.
----------

To Nonoy Oplas of FunWithGovernment.blogspot.in 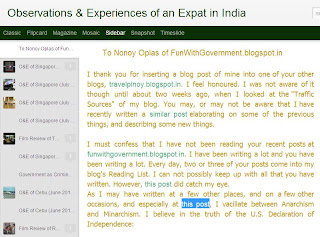 As I may have written at a few other places, and on a few other occasions, and especially at this post, I vacillate between Anarchism and Minarchism. I believe in the truth of the U.S. Declaration of Independence:

We hold these truths to be self-evident, that all men [or all people, to use the now more accurate word] are created equal, that they are endowed by their Creator [or simply endowed] with certain unalienable rights, that among these are Life, Liberty, and the pursuit of happiness. That to secure these rights, governments are instituted among men, deriving their just powers from the consent of the governed.

and feel that Minarchism can best support the investigatory body (police, sherriffs, detectives and the like) and tribunals (courts, arbitrators, mediators and the like) which are necessary in any and all civilized societies for the remediation of any infractions of rights. However, I am open to a fully Anarcho-Capitalist solution. I have read, watched and listened to many of the works of Stefan Molyneux (1, 2), especially Practical Anarchy. I shall write to him in the near future, asking him to clarify some things, in the hope that I can be more accepting of his ideas.

I dislike Anarchists' (and Marc Abela's) now-tired argument that "if you can get rid of 90% of government then why not get rid of 100% of it?" However, Anarchism is not about government; it is about rulers, specifically the absence of violent enforcers of diktats. It is true that if you get rid of political rulers then 99.9% of government will simply dissolve, like the Wicked Witch in the Wizard of Oz after water was thrown onto her. Any remaining entity like the Department of Motor Vehicles in the United States would need to become efficient to continue to justify its existence. The idea behind the DMV is that only people who are properly trained to be good drivers are allowed to become drivers. In reality, people who drive while under the influence of alcohol and drugs (legal or otherwise), people who commit road-rage, people who commit hit-and-run and vehicular manslaughter, people who have debilitating illnesses causing them to become poor drivers are still allowed to drive. For this, I do think that an Anarcho-Capitalist solution is desirable, although I am still uncertain how A-C can properly and efficiently replace (and preferably improve upon) the above-stated investigatory body and tribunals.

The reason why it is far from happening, and from attracting public support is that there are people with guns. They use these guns to brainwash children using government-run, mandatory re-education camps for youth (public schools). In the U.S., these children grow up and believe that there is a difference between the Democratic and Republican Parties. If people can not discern the obvious sameness of them, then how can they comprehend the obvious truth of Anarchism? Unfortunately, today the sword is mightier than the pen. Moreover, real-life John Galts and Vs (from V for Vendetta) are few and far-between, so people do not even realize that there are other choices.

Also, I found it counter-intuitive and even contradictory when you said that "we have to engage with governments at a limited scale if only to stop them from expanding even larger". If you were the stereotypical 95-pound weakling and I was Mike Tyson, then what incentive would I have to stop pounding you to a pulp? Even if you gave me an incentive, then you would only be giving me even more power and control over you; you would be my slave and I would be your Master. Why would you want to denigrate yourself in this way? If you saw Atlas, the giant who holds the world on his shoulders, if you saw that he stood, blood running down his chest, his knees buckling, his arms trembling but still trying to hold the world aloft with the last of his strength, and the greater his effort the heavier the world bore down upon his shoulders--what would you tell him to do?

Lastly, or perhaps firstly (since you began your post with it), I think that you may be correct that ObamaCare is a Trojan Horse. I think that the reason why ObamaCare has been accepted so far is that people are brainwashed into thinking that government-run health care is about health care. People are brainwashed into thinking that if the government puts lipstick on a pig and calls it the Second Coming of Christ then it must be the Second Coming of Christ. ObamaCare is nothing more Socialized medical insurance, none of which has anything to do with ensuring people's health.
---------

Thank you very much Mickey Fernandez, for the above frank arguments. I really appreciate them. I would like to make my own comments on the points you raised above.

1. "Anarchism is not about government; it is about rulers." True. Wiki says "Anarchy (from the ancient Greek ἀναρχία, anarchia, from ἀν an, "not" +‎ ἀρχός arkhos, "ruler", meaning "absence of a leader", "without rulers"),"

2. "If every shred of evidence showed that government agents are unproductive at best and counter-productive at worst..." This is all possible, except that there is a big "if" in each sentence and premise. Allow me to go back to my earlier paper, On Liberalizing Gun Ownership. I outlined there:

a. People can legally own guns, provided they belong to at least one gun club, a private organization. No club membership, no legal gun ownership. The purpose of this exercise is simply to promote transparency and accountability among gun owners.

b. People need not register with the government police, the latter will only recognize gun clubs with their set of officers.

c. A member of gun club A shoots someone, whether a non-gun owner or gun owner from gun club B, for no valid reason. Club A as referee will discipline that member, disarm him/her, make him/her accountable for the harm done to another person.

d. If club A won't do that, the victim or his family will go to a bigger armed group, the government police and justice system, to seek remedy. The police can dis-recognize and disband a club for not doing its job. All members of the club will then be disarmed, they can move and apply to other gun clubs though.

e.  Several members of gun clubs A and B had a shooting war. The officers of both clubs did not discipline their erring members, they even justified their actions, so now all members of both clubs can be involved in a bigger inter-club shooting war. A bigger armed force, the police and the justice system, will step in as the final arbiter and referee to control or minimize more bloodshed.

f. Entry of the police and the courts/ justice system is a last resort. The assumption is that all gun clubs are led by responsible and mature individuals. Otherwise, their club can be abolished, and respectable members can join other clubs with mature and responsible leaders.

g. The anarchy position can argue that such "bigger armed force" need not be government, it can be a federation of gun clubs and hence, will remain a voluntary and private organization. Fine, but all the elements of a government are present in that federation:
(1) officials elected by members;
(2) appointed officers and secretariat hired by this group of elected officials;
(3) mandatory, forcible contributions and other fees to sustain this federation, the salaries of the officials and staff, office rental and other overhead costs;
(4) system of recall, punishment for erring elected officials and appointed bureaucrats;
(5) external auditors or oversight bodies to check on the administration of internal justice system and related matters.

So in the end, people are back to square one -- having a government and rulers who will promulgate the rule of law, to implement the rules and regulations, the system of reward and punishment, of the federation and gun clubs.

3. "You do not need a ruler to tell you when or where to sleep, where, when and how to drink or eat...." Sure thing, the Minarchist position (at least the one that I believe in) also argues this way. What the Minarchist position adds only, is that we need a bigger ruler with bigger coercive power to discipline fellow mortals among us who have inflicted harm and plan to inflict more harm to more people. And we go back to the above example of armed men who shoot other people for no valid reason and their gun club officers tolerated or even justified their actions. In the absence of a bigger force, who will discipline people with guns anywhere in the country who have gone wild?

The "social contract" as postulated by Hobbes, Rousseau, I think, stipulates that we surrender a portion of our individual freedom to a bigger agent in exchange for that agent to ensure that we shall have bigger freedom to pursue what can make us happy, free from possible harassment and extortion by some shrewd and armed men among us.

4. "If you were the stereotypical 95-pound weakling and I was Mike Tyson, then what incentive would I have to stop pounding you to a pulp?" Your  growth to become a huge and (violent) Mike Tyson that can pound me to a pulp was a result of past failures to control government to grow this big in the first place. If we disengage with government now and just demonize all government agents and agencies and hope to have a zero government, zero rulers in the near future, what we may reap actually is the opposite, a Mike Tyson that has morphed to a bigger, stronger Incredible Hulk, or the villain transformers.