* This is my article today in the online magazine. After this paper, a brief exchange with fellow UPSE alumni, Gary Makasiar, in our SEAA ygroups.
---------- 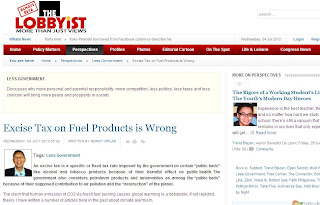 The claim that human emission of CO2 via fossil fuel burning causes global warming is a debatable, if not rejected, theory. I have written a number of articles here in the past about climate alarmism.

Fuel products, those liquid-gas substances that help move our cars, buses, trucks, planes, motorcycles, pumpboats and some power plants, which allow us to produce and transport more goods and services, including bringing our kids to their schools, are not "public bad". We buy and import petroleum products because we need them. Without petrol products, our kids will be walking to school or riding bicycles, carabaos or horses. Without petrol products, vegetables from Benguet and other provinces will all be damaged and wilted when they reach Manila via carabao or horse transport, and there may be mass starvation in big urban areas like Metro Manila.

Currently, the Bureau of Internal Revenue (BIR) collects these excise tax rates on the following petroleum products, in Pesos per liter:

So there are two taxes that are slapped on fuel products, excise tax and value added tax (VAT). There used to be import tax too, but this has come down to zero in recent years.

From these excise tax rates, here is the government excise tax collections from 2010 to 2012, in Billion Pesos.

Since the volume of our national petroleum consumption is rising, not declining (see the big number of new cars and motorcycles, new buses and trucks, etc. that are added to our roads each year), the small or marginal increase in excise tax collection from 2010 to 2012 can mean one thing – that the extent of oil smuggling, or plain tax evasion, could be rising. Smuggled oil are not slapped with VAT and excise tax, the smugglers only pay off some BIR, BOC, local officials and police, to allow such smuggling and under declaration of sales to happen. The smugglers are then able to sell their products at a cheaper price, which attracts many buyers.

A friend who is a high official at the Department of Finance (DOF) said that excise taxes are not just slapped on so-called "public bads", but also on “products whose consumption must be regulated because of relative scarcity. We import petroleum products and it behooves us to be more prudent in the consumption of such products. That is part of the sumptuary nature of excise taxation.”

But wait, almost all commodities have "relative scarcity" -- computers, cell phones, cars, bicycles, rice, hamburer, beer, etc. So this rationale is not valid. The main reason why the government slaps excise tax on petroleum products is simply to get more money from the pockets of the people.

The cost of taxation, especially multiple and complicated taxation, is not just the actual amount being remitted to the government. There are three actually: (a) hiring auditors and/or lawyers to properly comply with various tax obligations, (b) bribes if necessary, to hasten and simplify tax assessment and payment, and (c) actual taxes paid.

What we see in government records like the budget and revenue programs is only item (c). Depending on the nature of taxes, it is possible that items (a) and (b) can be as large, if not larger, than (c). For instance, for inheritance tax, I think about 20 percent of the value, and corporate income tax, 30 percent of the net income of an enterprise which is huge, the tendency of entrepreneurs and individuals is to bloat operating costs or understate revenues, get good auditors and lawyers to find more loopholes that are legal anyway, and make arrangements with the government’s tax assessors and collectors. The latter are just humans with their own personal interests to look after. The same way that legislators, government personnel and subsidy-seekers want to see more taxes going into the government coffer that they think will ultimately go to them.

This would partly explain why excise tax collections by the government from petroleum products is rising marginally if not flat-lining.

What would be worrying is when DOF officials would advocate that the excise tax on diesel should be raised further because it is a “scarce resource whose consumption must be effectively managed.”

Government “effectively managing” the consumption of a particular commodity is tantamount to controlling its use and in the process, controlling its price. From quantity control to price control, directly or indirectly; implicitly or explicitly. This is wrong.

Petroleum products are very useful and important products, they should be spared of distortionary policies like slapping the excise tax. Instead, the excise tax on all fuel products should be abolished. When petroleum products are cheaper, then people can produce more, or transport more, goods and services. The cost of mechanical tilling of an hectare of rice, corn, banana, sugarcane, etc. will go down. The cost of transporting these crops, vegetables, other fruits per kilometer will also go down. These plus competition among producers, wholesalers and retailers, can lead to lower prices of food products and other basic necessities. Lower prices of many important commodities is a lot more effective than all those government subsidies to “help the poor.”

So the government practice of slapping an excise tax on gasoline, diesel and other fuel products is wrong. To say that those excise tax collection is used by the government to build more roads, bridges, etc. is not valid. Because people pay (a) income tax, personal and corporate, (b) VAT for almost all products, (c) motor vehicle user charge (MVUC) or car registration tax, (d) common carriers tax or public transportation franchise tax paid indirectly, (e) documentary stamp tax, (f) withholding tax for bank interest income, many other taxes and fees.

Government collection from these multiple taxes and fees are huge, it can use those to build and maintain more roads and bridges. In many roads now, many people do not even use taxpayers-funded roads, they use toll roads (SLEX, NLEX, SCTEX, Coastal Road, CavitEx, etc.), the pay as they use/drive scheme. This gives breathing space for the government in terms of lesser money allotted for new building new roads and maintaining them.

Okay, just to humor your readers, fans and followers, noy. here is my take. whenever discussing oil, i find it useful to think of three phenomena simultaneously at work. first, highly inelastic (extremely vertical?) demand in the short run. second, very low short-run marginal costs for say opec oil. and third, politico-military flash points all over the world, especially in critical opec territories. Who is in the best position to exploit that wonderful confluence of revenue opportunities? I can think of three. Namely, the private oil indstry maximizing collective profits, the oil-exporting governments maximizing production royalties, and the oil-consuming or net-importing countries excising in the name of scarcities, conservation, or what have you. The painful truth is that petroleum excise taxes are one of the easiest to collect and administer. So all three try to get as much as each can from the final retail price. It is a 3-way tug of war, almost zero sum.. And the beauty is that nobody knows where the real breaking point is. So it is a pincer movement. being so, one cant be faulted for thinking that every inch given up by one of the three, gets quickly snapped up by the other two. In other words, the short-run payoff matrix is such that there is no advantage to yielding or making way. almost zero-sum. The default (and dominant) strategy is to stake a larger and larger claim. Anyway, should oil sales or consumption contract in the longer run, the strongest pressure to 'loosen up' would prolly fall first on the supply-side agents (oil industry and exporting govts) who might be forced to decelerate the rate at which their profits or royalties grow, until the next up tick in the global economy. There are also the multilateral agencies who welcome nothing better than an 'improved fiscal position' for oil-importing jurisdictions. Should excise taxes be retained or abolished? That will depend on the objective function of the one deciding and the time horizon he is looking at. Off hand, and from this vantagepoint, I would say the cards may inherently be stacked up against those who dread more excise taxes.

Gary M's point, I think, supports my earlier contention -- that excise tax on petrol products are nothing but revenue maximization schemes of governments and have nothing to do with oil conservation, managing scarcities or what have you. "Palusot" na lang yon, sabi nga ni Cong. Farinas. If demand is highly inelastic, even if government excise tax is P20 or P40/liter and not just P4.35 for unleaded gas and P1.63/liter for diesel, people will still consume petrol products. If you have the means, would you wish to see your kids riding a tricycle or trisikad in going to school and endure all types of dust, heat and pollution? No way, kotse mga bata, or at least air-con school bus, even if gasoline or diesel prices are expensive.

Thus, on the part of the excising governments of net oil importing countries, it's just a matter of how much hypocrisy it can announce while smiling. Government says it wants to control or manage inflation (hi BSP) and yet government pushes inflation up by introducing as many taxes as possible on the price of oil and other commodities. Just keep smiling and promising that government's heart bleeds for the poor.

Speaking of the multilaterals, they are the choir partners of governments of course in having more revenues, more taxes, because they will do various central planning programs to fight poverty. Which reminds me of these quotes: