* This is my article today in the online magazine,
http://www.thelobbyist.biz/perspectives/less-gorvernment/1337-renewable-energy-and-higher-electricity-prices
--------- 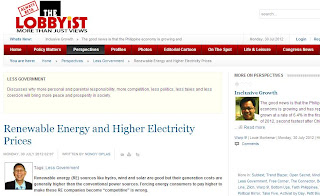 Renewable energy (RE) sources like hydro, wind and solar are good but their generation costs are generally higher than the conventional power sources. Forcing energy consumers to pay higher to make these RE companies become “competitive” is wrong.

The RE Act of 2008 (RA 9513) has created various schemes to develop some RE power sources via certain subsidy schemes, like the feed in tariff (FIT) and renewable portfolio standard (RPS).

FIT is additional charge to be passed on to energy consumers and given to RE power sources. This is an indirect tax in effect and the beneficiaries are the RE power companies who will receive the FIT. RPS is a system requiring electricity suppliers to source a certain minimum of their energy supply to come from eligible RE resources.
The Energy Regulatory Commission (ERC) has approved last July 27, 2012 the FIT rates for RE projects. These are lower than those proposed by the National Renewable Energy Board (NREB), another bureaucracy created under RA 9513. Units in Pesos per kilowatt hour.

These schemes are another product of climate alarmism and racket that will further rob more money from energy consumers, you and me.

Even before the application of FIT system, the Philippines has the most expensive rates in the whole of Asia, higher than power rates in Japan, Korea, HK, Singapore, Taiwan, etc.. 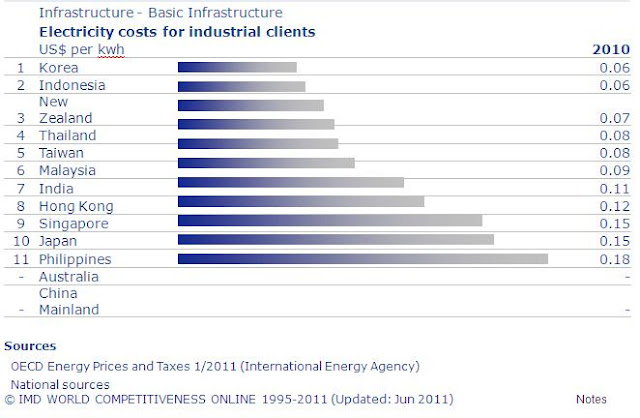 The FIT and RPS schemes will therefore make the already high power rates become even more expensive as these two schemes immediately assure the RE companies of guaranteed markets and buyers, even if current RE costs per kwh are high, and even if RE supply is unstable and unreliable. This is not fair. I have discussed earlier why the RE law is disadvantageous to energy consumers here, Energy rationing 2: The Renewable Energy (RE) law.

About two or three years ago, PDE organized a forum in UPSE about "burning planet and climate mitigation" something like that. The two speakers were the head of the Carbon Finance Solutions (CAFIS) and the chief economist of ADB, a Japanese I think.

During the open forum, I explicitly argued that the things that the CAFIS and ADB guys are saying are based on wrong premise -- that of an ever-warming, unequivocally warming world due to more CO2 emission due to more humanity's modernization. The most recent temperature data, air and tropospheric temp., land and sea surface temp., are declining or at least flat-lining despite rising CO2 concentration reaching around 390 ppm.

The CAFIS and ADB guys said that they are no scientists and they cannot comment on those things, but what they offer are means to mitigate man-made warming and climate change, adapt humanity to such climate change.

For me those were not valid responses. They cannot defend a corrupted political science by the UN (IPCC, FCCC, UNEP, etc.) masquerading as climate science, but we should nonetheless accept their proposals and programs of more climate loans, more RE loans, more carbon regulations and taxation, and so on.

I have nothing against those RE power sources per se. If people want to power their houses, offices, schools, etc. with wind or solar or biomass or other RE sources, fine, let them shoulder the full generation cost of such energy sources.

What I find objectionable is coercing us average energy consumers to pay even higher electricity prices just to subsidize the producers of RE power plants and to help “save the planet.”

I have argued before in this column that the planet is fine, it does not any savior. Climate change is true, it changes from warming to cooling and warming and cooling…. in endless, natural and multi-decadal cycles

So if climate changes naturally, with or without human intervention, what is the logic behind all those “save the planet” schemes like the RE law?
--------

Thank you for your articles that you have shared with us. Hopefully you can give the article a good benefit to us. Energy Review