A slightly longer version is posted in the Liberty Institute website,
http://www.indefenceofliberty.org/story/4369/4522/Politics-of-Power-Prospect-for-reforming-the-electricity-sector
------------- 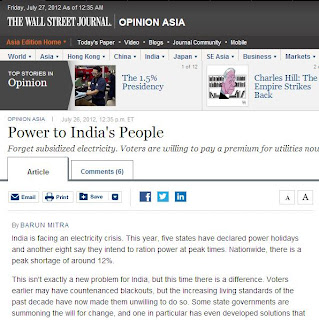 India is facing an electricity crisis. This year, five states have declared power holidays and another eight say they intend to ration power at peak times. Nationwide, there is a peak shortage of around 12%.

This isn't exactly a new problem for India, but this time there is a difference. Voters earlier may have countenanced blackouts, but the increasing living standards of the past decade have now made them unwilling to do so. Some state governments are summoning the will for change, and one in particular has even developed solutions that open the door for more policy innovation and reform.

For decades, the political wisdom was to provide electricity at very low cost to consumers, and often at no cost to farmers. So while one set of users paid little or nothing, another set usually comprising industrial and commercial users often paid three to four times higher. These so-called cross subsidies couldn't keep up with politicians' promises though. The result was a big financial hole for the power generator or distributor—these days the latter—which eventually left it unable to supply power.

Voter agitation about these shortages, as well as recent state election victories for parties that talk about reforming public services, have gotten politicians to rethink their tack. The southern state of Tamil Nadu, in the face of rolling blackouts for 2-6 hours every day, agreed to hike tariffs for the first time in a decade this year. The enormity of the situation can perhaps be best appreciated from the fact that the two major parties in the state haven't opposed the construction of the Kundakulam nuclear power plant, despite NGO protests over it since last year's Fukushima meltdown in Japan.

Next, consider Gujarat, which has summoned the political will for a new creative idea. In the past decade, it has built a parallel distribution grid, particularly in rural areas, and offered consumers a unique choice. If farmers opt for the new grid, they are assured electricity for eight hours a day, but at higher tariffs (they can still access the old grid). Or they could remain on just the old supply network, without any assurance of supply of electricity, but at the lower price. To the surprise of many observers, farmers have opted for the former. Gujarat has also aggressively curbed theft of electricity. 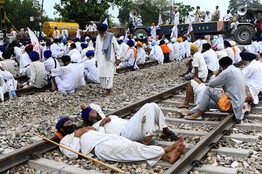 Tamil Nadu and Gujarat's examples clearly show that people prefer stable supply of power over its price. The ideal next step is complete deregulation of distribution, but let's be realistic: Few politicians will abandon control so quickly; nor will they be brave enough to immediately take this radical solution to voters. Meantime, though, state governments can take their innovations to the next level.

Gujarat's case demonstrates that farmers could do with the irregular supply on the old grid for some needs such as running household appliances, but for larger requirements like tending to their fields, they specifically want a premium supply. Yet, right now, this comes in the form of a second distribution network, which is expensive to build and maintain. The state government resorted to this, to diffuse the political opposition tariff increases on a single grid would have inevitably created.

The Nobel Laureate Vernon Smith once suggested differential pricing on the same grid, as a strategy to overcome this opposition. One way forward for India, then, is for consumers to pay a below-market price for 'x' units of electricity. But above 'x', electricity should be priced competitively.

As India's economy grows, more people will begin to consume more electricity, and this big marginal increase in consumption would be paid at market prices. After some years, most of electricity consumption will be at competitive prices.

Such a transition will change the landscape of the power industry and make it more economically viable. It will reduce the incentive for political interference in pricing, since consumers would be willingly hiking their electricity consumption, without expecting to be subsidized. Meanwhile, politicians can still claim to be pro-poor. Losses incurred by state-owned distribution companies, which currently runs to over 1 trillion rupees ($18 billion) all over India, would dramatically come down.

As a result, this system would stop skewing price signals. Today's distribution network involves below-market prices nearly across the board, which means that few producers have incentives to set up power plants. Even in Gujarat, the incentive isn't fully in place since one distribution grid still operates on subsidies.

This plan for a single-grid premium system still involves some distortions, but that distortion itself dwindles once most electricity consumption takes place above 'x'. And this is, anyway, an intermediate solution to convince voters of the idea of paying competitive prices for quality power supply, something they took for granted a decade ago.

Clearly, innovations like these will not occur overnight, and not across all states at the same time. But the political trend in favor of competition is clear. Voters are realizing that electricity is no free lunch and in a federal setup such as India, the onus will fall on the states to experiment with ideas that could match the new sentiment. When they're confident that voters are behind them, these states will pursue bigger reforms.