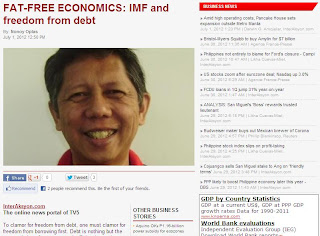 To clamor for freedom from debt, one must clamor for freedom from borrowing first. Debt is nothing but the accumulation of past wastes, inefficiencies and profligacy. If the use of past debt was useful, then the debtor – a person, a corporation, or a government – should be able to pay off those debts later while sustaining its productive momentum. Or at least the debt stock should just be a small portion of its overall wealth. But if the use of past debt was unproductive, then the debtor will have an ever-rising pile of obligations.

Recently, the IMF has mobilized funds from emerging markets to pool some $456 billion to help debt-distressed European Union economies. The Philippine government through the Bangko Sentral ng Pilipinas contributed $1 billion to the IMF crisis fund. That fund will not directly come from tax money; rather, it will come from BSP’s international reserves, which are mainly foreign investments denominated in foreign currencies and are parked at the BSP. Still, the BSP move to contribute to the Eurozone bailout fund is wrong, and here are the reasons why:

One, those debt-ridden EU governments are not exactly resource poor. They have lots of state-owned corporations and financial institutions, as well as huge assets (military camps, parks, etc.) that can be privatized to raise domestic revenues to deal partially with their current spending requirements and debt obligations, instead of relying on endless taxation and borrowings.

Two, the bailout will create more moral hazard problems for those indebted countries. If they see that a bailout is forthcoming, why would they institute more austerity and subsidy reduction programs? Why privatize, which can hurt their chance at reelection? Instead, they made limited austerity measures, then issued some warnings that their debt problem can "spiral to the global economy” unless the world will send them more money.

If those European governments could not stabilize themselves when their public debt-to-GDP ratio was only at 60 percent or less, what makes us think that they can stabilize themselves at 110 percent or more? Spain, Italy and France for instance, have been in deficit spending for more than 30 years straight, three plus decades of living beyond their means. The PIGS (Portugal, Italy, Greece, Spain) would need possibly one trillion dollars or more of bailout money, and there is no guarantee that such rescue money will be fully paid.

Three, the BSP can use some of its $77 billion in gross international reserves to buy and hoard more gold plus other precious metals. It is true that putting a portion of its high international reserves in the IMF bailout fund would earn higher returns at lower risk than putting it elsewhere where the risks are much higher. But a better alternative for the BSP is to buy more gold and other precious metals, take advantage of the rising values of these commodities as additional insurance against present and future economic volatility.

Four, the best way to protect ourselves from a potential monster global financial turmoil coming from Europe is not more bailout money for those governments and hope for global stability. Rather, it is to veer away from more public indebtedness itself.

Right now, we pay P328 billion a year (average for 2010 to 2012) on interest payment alone for the public debt, foreign and domestic. That is real, huge money flying out of our pockets each year, precisely because of heavy debts by the Philippine government itself. Just one year of government living within its means, of not borrowing to finance a year of budget deficit, will go a long way.

In short, the best bailout program for equally indebted and emerging economies like the Philippines is to bail out ourselves first, by drastically cutting the public debt stock over the medium- to long-term, and reduce if not stop additional borrowings in the short-term.

The government should learn to live within its means now. If projected revenues are only P1.7 trillion, then spending should be limited as much as possible to P1.7 trillion too. Do not aspire for P2 trillion, the proposed 2013 budget, and make new borrowings for P300 billion.

In addition, the government should entertain more privatization of some government corporations like Pagcor, financial institutions, other assets. Get the money to reduce the public debt stock and savings in annual interest payment can finance special programs. For instance, if they want to modernize the AFP without burdening further the taxpayers, they should consider privatizing Camp Aguinaldo and the AFP HQ should move to some cheaper places like Cavite. This way, the need for additional borrowings will be avoided.

While it is true that the government has been retiring some pricey debts in the past, more than $15 billion since 2006, the same government was also incurring new pricey debts. Three examples:

An interest payment of $142 million a year or P6.1 billion a year (at P43:$1) interest on one loan account alone is huge. When the Department of Finance proposed slapping a VAT on toll at the North Luzon Expressway, some motorists in Central and Northern Luzon wanted to start a civil war to protest the move. The DOF expected to collect about P2 billion a year in taxes.

So compare the high public animosity in paying an aggregate tax of around P2 billion from NLEX toll alone with the P6 billion interest payment alone for one single loan account. But then again, government is force and coercion. We pay the VAT for using NLEX, SLEX, other expressways, even if we already pay import tax, excise tax, VAT on each liter of fuel that we put into our vehicles. Shake your head as you pay those endless taxes and move on.

Could the BSP have said no to the IMF when it passed the hat to pool a huge bailout fund for debt-ridden EU economies?

I think no. For one, it is impossible for the Philippine government to tell those debt-ridden European governments to "learn to live within your means" because the Philippine government is also doing what they did, piling up more public debt for whatever developmental programs and bleeding heart reasons. The difference is that its fiscal irresponsibility is of a lesser magnitude than those in the EU.

There are proposals from various sectors that instead of lending $1 billion to the IMF, BSP should have used the money for domestic developmental programs and projects to better prepare the Filipinos for the on-going and possibly worsening global debt meltdown. This is not possible.

Before I can be accused of advocating “do not make any borrowing because borrowing per se is bad”, let me say that I do not say nor advocate such. I get into personal debt too sometimes as other people do. An emergency strikes - like a family member gets terribly sick - the savings are not enough. We borrow from friends and relatives, the sick recovers, we work hard, later we pay the debt, we move on.

It is different when there are no emergencies and a person or an institution like government keeps borrowing. There are emergencies, like after the Pinatubo eruption in 1990, the huge earthquake of 1991, lots of public infrastructures were damaged, Government had to borrow a lot. After a few years, productivity somehow should have stabilized; government t should have paid many of the past debt while avoiding making new debts to make room for future emergencies. This did not and does not happen. That's the big difference.
-------

Government and Taxes post is so very good ! Just visit also our site is my pleasure,click here!

I must say that this one is the result of great creativity. Also useful, plus cost is also less for this.