* This is my article today in the online magazine,  http://www.thelobbyist.biz/perspectives/less-gorvernment/1329-minings-eo-79-the-promise-and-challenge
------------- 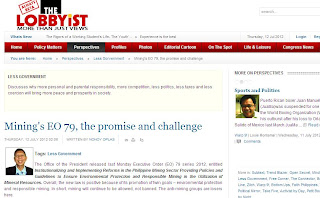 The Office of the President released last Monday Executive Order (EO) 79 series 2012, entitled Institutionalizing and Implementing Reforms in the Philippine Mining Sector Providing Policies and Guidelines to Ensure Environmental Protection and Responsible Mining in the Utilization of Mineral Resources. Overall, the new law is positive because of its promotion of twin goals – environmental protection and responsible mining. In short, mining will continue to be allowed, not banned. The anti-mining groups are losers here.

Going through the new EO, the good points from the perspective of limited government, rule of law, and property rights protection, are the following:

One, the promise of “full enforcement of environmental standards in mining.” Rule of law, the law applies to all, rich and poor, big and small, no one is exempted from the law and no one can grant exemption from the provisions and penalties of the law. Among the most common observations is that while the large mining companies are heavily monitored and regulated by the DENR and local government units, the small-scale mines and miners are not. Thus, it is one thing to promise “full enforcement” and another to really implement this. But nonetheless, it is important that the philosophy of the rule of law is made as explicitly as possible.

The EO has expanded the list of “no go” zones where mining will be prohibited. Before the EO, these zones were only the protected areas; now, they include prime agricultural lands, lands under agrarian reform, tourism development areas, island ecosystems and other critical areas. This expansion of “no mining” areas will tie the hands of many local government units that issue small scale mining permits. This plus the “full enforcement of environmental standards” policy will be a big challenge in promulgating the rule of law culture in the country.

Two, creation of a one-stop-shop for all mining applications and procedures. This means reduced government bureaucracies and red tapes. To move from one agency to another, arranging meetings and securing compliances with various requirements, takes time and money. This plus other related expenses are something that the mining operators and applicants will pass on to their buyers (indirectly, more expensive cell phones, tv, cars, steel and other construction materials, other products of mining) or the local community and environment in the form of lesser spending for environmental regeneration.

The one-stop-shop will be created within six months after the effectivity of this EO, that should be enough time when a new legislation and hence, a stop on the moratorium on new mining permits will be lifted.

Three, joining the Extractive Industry Transparency Initiative (EITI) to promote more transparency and accountability. The Philippine government and the mining companies registered with it will soon be part of the annual reports of this initiative showing how accountable those governments and companies are in paying for natural resources and preserving or restoring them. Mining, petroleum and other companies in the extractive sector will report how much they have paid to the government while governments will report how much they have received from the companies. So reports of corruption or even extortion can be more easily detected.

On the other hand, what I find lacking in the new EO, are the following.

One, not enough transparency nationwide. Information like the names of companies and individuals engaged in mining, small to large-scale, their location and area coverage, how much they have paid to the government in various taxes and fees, accessible in the web, is not mentioned or assured in the EO. This information will help guide the public and the concerned government agencies in their “full enforcement of environmental standards in mining” function.

Two, among the functions of the Mining Industry Coordinatiing Council that was not listed in the EO, would have been to make the above information accessible to the public. If companies and the government will report their payment and receipt at the EITI, they should do the same with more details at the MICC.

The call by some sectors like the Alyansa Tigil Mina (ATM) and Palawan NGO Nework (PNNI) to have a “stronger” EO like declaring a permanent ban of mining in certain areas and provinces like Palawan is misguided. The EO has retained the moratorium on the granting of new mining agreements until a new Mining Act is enacted, they should recognize and support that provision.

Mining is a good industry. Without mining, we shall have no cell phones and computers, no tv and radio, no cars and buses, no tricycles and bicycles, no steel and buildings. To call for the banning of mining, or even restricting and banning large-scale mining, is wrong. Compared to small-scale or micro mining, it is large- and corporate mining that is more transparent and more accountable, that pays more revenues to both national and local governments.

The amount of corporate investments in mining is also huge. It was nearly $620 million last year despite the delay in new projects due to the moratorium on the granting of new mining agreements; the projection was $1.44 billion. This year, the projected investments will be $2.27 billion. People who would rather be unemployed or underemployed and ask for more CCT and other subsidies from the government, would become productive people receiving their regular pay and other allowances.

The government armed forces, the police and the army, should do their job in protecting private property like the huge mining equipment and other investments. The burning and looting by the NPA rebels in four mining companies in Mindanao two years ago should not have happened and should never happen again.

One good activity that the advocates of zero mining, or ban of corporate mining can do, is to campaign for very basic if not primitive lifestyle. Ride horses and carabaos instead of cars, have no cell phone or computer or TV as these are all products of mining. To limit the supply of something, one should just limit the demand.

This is not possible of course as even the most rabid anti-mining groups and leaders cannot live without the modern gadgets, appliances, cars and structures derived from mining. It is important therefore, that people should accept certain compromises in economic and environmental regulations.
--------