* This is my article yesterday in TV5's news portal,
http://www.interaksyon.com/business/38886/fat-free-economics-healthcare-corruption-and-physician-entanglement
----------- 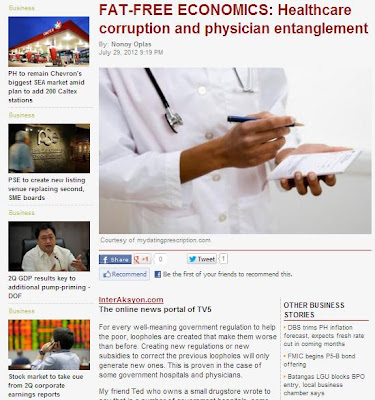 For every well-meaning government regulation to help the poor, loopholes are created that make them worse than before. Creating new regulations or new subsidies to correct the previous loopholes will only generate new ones. This is proven in the case of some government hospitals and physicians.

My friend Ted who owns a small drugstore wrote to say that in a number of government hospitals, some physicians require their patients to buy medicines only from a particular drugstore. The prices of those drugs in that pharmacy are several times more expensive than in other drugstores. The difference goes to the physicians, their partner medical representatives and the drugstore.

Ted says the doctor asks the patient to come back after buying the drugs. If the medicines are bought elsewhere – the receipt does not come from the specified drugstore, there are no initials by the med rep at the bottom of the drug packaging, or other schemes – the doctor would tell the patient to return them and buy only from the specified drugstore. Ted calls this scheme “doctor’s deal.” A doctor friend describes this formally as “physician entanglement” with med reps and/or drugstores.

Here are examples of drugs. Note that prices under the entangled scheme are multiples of those subject to no such scheme:


Below are the receipts showing that these are actual figures. For Phoerenix, one receipt from a Quezon City drugstore dated December 08, 2011 prices the medicine at P39 each, and the second from a Calamba, Laguna pharmacy dated May 26, 2011 prices the same drug at P420. 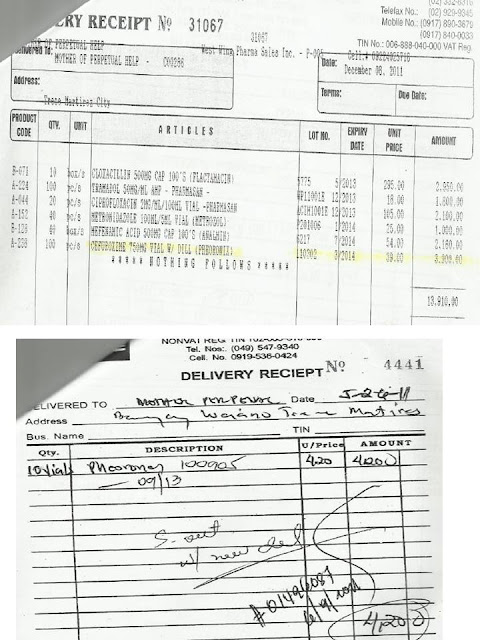 For Hazolin, one receipt from the same Quezon City drugstore dated December 01, 2010 has a unit price of P38, while a second receipt from Imus, Cavite dated September 7, 2012 has a price of P350. 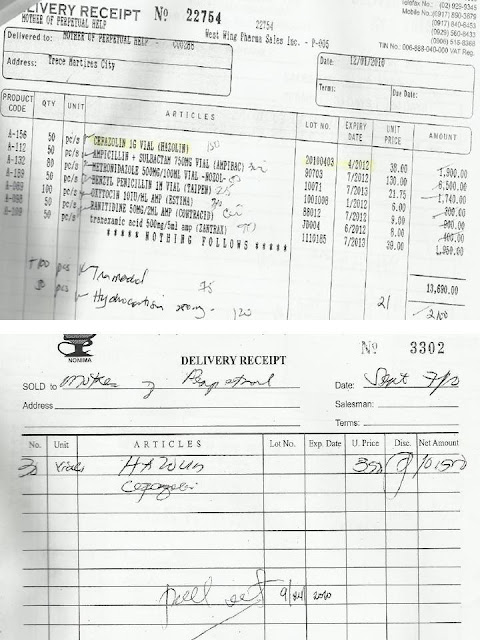 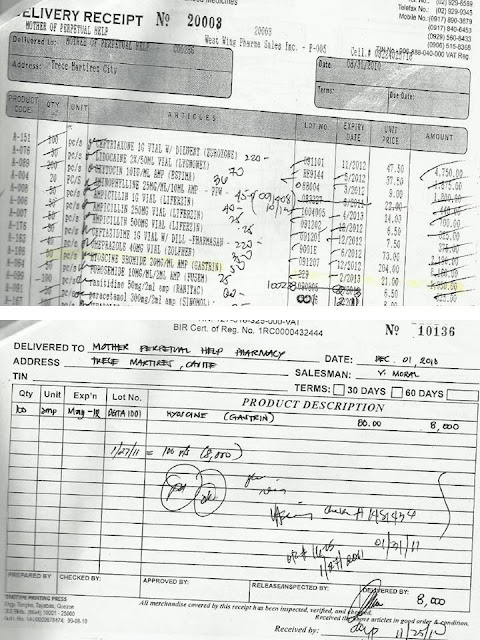 The purpose of having a government or taxpayers’ funded hospital is to allow the poor to have access to healthcare at low or zero cost to them. Cool in theor,y but does not happen in reality, as the above cases show. A poor person is forced to buy expensive medicine at a particular drugstore to enrich certain government physicians and their partners.

There is a related study on this subject published in 2009, An Unhealthy Public-Private Tension: Pharmacy Ownership, Prescribing, And Spending In The Philippines by Chris D. James, John Peabody, Orville Solon, Stella Quimbo, and Kara Hanson. Here is the Abstract:


Physicians’ links with pharmacies may create perverse financial incentives to over-prescribe, prescribe products with higher profit margins, and direct patients to their pharmacy. Interviews with pharmacy customers in the Philippines show that those who use pharmacies linked to public sector physicians had 5.4 greater odds of having a prescription from such physicians and spent 49.3 percent more than customers using other pharmacies. For customers purchasing brand-name medicines, switching to generics would reduce drug spending by 58 percent. Controlling out-of-pocket spending on drugs requires policies to control financial links between doctors and pharmacies, as well as tighter regulation of non-generic prescribing.

This is a serious issue, although the data was for 2007-2008. Take this table for instance. Out of the 166 customers interviewed buying from a doctor’s pharmacy, 52 percent said they bought at a drugstore that was recommended by their government physician. This is more than twice the incidence for public doctors who do own or are not linked to a particular drugstore. 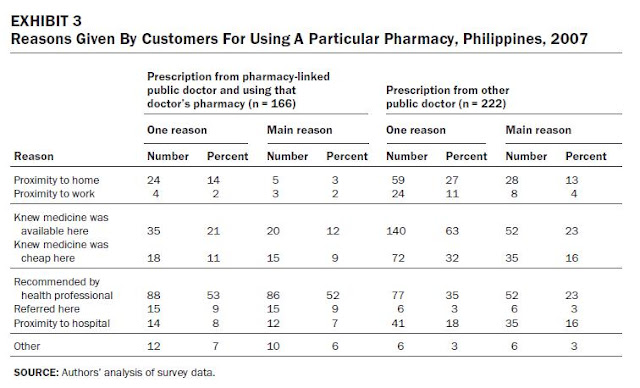 From the patients' and consumers' perspective, this is wrong. As consumers, our "vested" interest is more choices, more options; not less, not monopolization.

And while it is often said that some pharmaceutical companies - innovator or generic - would give gifts or donations to government hospitals and/or doctors, there are also cases of drugstores giving donations to government hospitals and/or doctors. The result is the same: the beneficiaries’ drug prescription behavior is somehow influenced by the donors. So even if the prices of the donor drugstores or pharmaceutical company are higher than competitors, patients buy from them.

One would ask, why do some government physicians do this? Government doctors are not earning enough. They get a fixed salary, so some "moonlighting" can be expected. It is no different from University of the Philippines faculty members - like Orville Solon and Stella Quimbo, the two local co-authors of the paper mentioned above - doing research and consulting work with the World Bank or World Health Organization or US Agency for International Development, or wherever, to augment low salaries in UP.

Many government physicians do not spend much time on each patient. There are just too many patients seeking free or cheap consultation. But the salary of the government physician is fixed, whether they see 20 or 100 patients a day. Perhaps those patients who bought from the doctor’s family-owned drugstore would get longer consultation time, to compensate for the higher cost of the medicine that the patient had to fork out. Or perhaps the same doctors would give their cell phone numbers to those “generous” patients, who can text them and ask more questions and advice even if the physicians are already outside the clinic or hospital.

I have yet to see data to back up these claims, but they are highly probable.

Nonetheless, the above cases would point to one thing: if certain free market avenues are stifled through more government intervention, one can expect loopholes and circumvention of regulations to happen somewhere.

That is why more government subsidies and freebies in healthcare will not achieve “universal healthcare.” If services are provided free - or at a heavily subsidized rate - then demand will always be larger than supply. The result will be medicine and healthcare rationing. People may get free X-ray or some other diagnostic test, but they will have to wait for hours or even days to get the results. In Canada and other rich European economies, some patients have to wait for weeks, or even months, to get appointments to see a specialist.
--------