One of my friends in facebook made the following observations about Henry Sy and the SM group of companies:

1. Sy and his family own SM malls and supermarkets, Banco de Oro, Save More and Hypermart, SMDC residential condos, etc. Why do they own and earn so much? This is corporate greed.

2. Many local businesses die instantly when an SM Mall is built in the community, there should be a cap to wealth and greed, and monopolies in various forms should not be allowed.

3. In the Bible, there was the year of Jubilee when the wealth of the rich would be redistributed to the people. 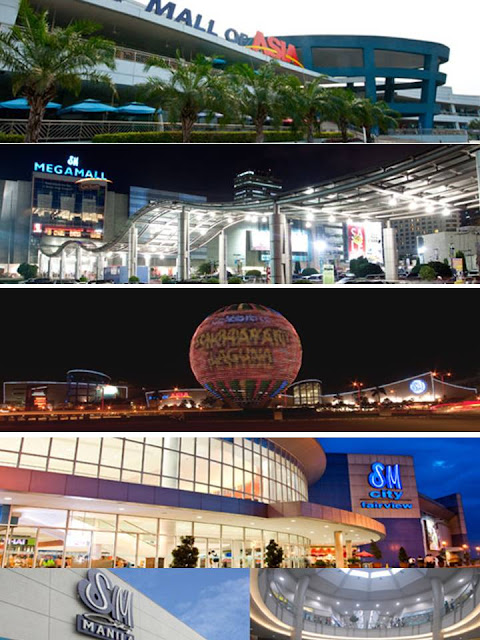 I commented that where there are more malls, more high rise condos, whether they are by the Sys or Ayalas or Gokongweis or any other businessmen, there are more jobs, contractual or permanent. Where more people have jobs, there is less dependence -- on government, on family and relatives.

It is not true that SM, Robinsons, etc. usually put up their malls only in prime commercial properties. They also put their malls in idle, far out places where frogs, snakes, crickets occupy huge grassland areas. What used to be idle lands where only very few people work, later have thousands of workers -- from construction to mall and shop workers and entrepreneurs. Like in North Fairview, Quezon City, then Robinsons followed, the place became busy. In Cavite, SM Molino is in a far out, all cogon area, now surrounded by various housing projects. SM San Fernando, Pampanga, beside NLEX, also on a cogonal/grasland area. They need several hectares of land, so they prefer far out, non commercial areas where land prices are cheap. And this helps disperse business activities

It is not good to recommend stoppage of the expansion of those malls that "kill small businesses". Ordinary people who prefer to go to the air-conditioned, well-lighted and clean malls should not be deprived of enjoying such perks if these are available near their areas. Besides, these malls often allot small stalls for micro entrepreneurs.

SM and the local mall developers are generally super rich simply because they do not have enough competitors. The Constitution effectively disallows Wallmart, Target, Phoenix, Utama, other huge malls abroad to come in and compete with SM, Robinsons, Ayala and other local malls. The latter are oligopolies, they can be a monopoly in a particular city, like CSI mall is a monopoly in Dagupan City (owned by the family of the city mayor, I think).

There are also individual greed or the "poor's greed", an oxymoron. During heavy flooding (most recent was Habagat flooding), trisikads were charging P100 to P200 per person, when the usual rate was P10 to P20. Then there are also politicians and high government officials. One cannot start a simple business unless he/she gets their signatures and such signatures can come at a high price.


The Sys may have been very greedy while they give jobs, directly and indirectly, to hundreds of thousands of people. But someone who is "not greedy" but cannot give job to even one needy person may not be helpful either.

We can assume that if given the chance, most people would be greedy -- as a government official, as a trisikad driver, as a physician, as a lawyer, as a businessman, and so on. One way to "control the greed" is to have competition in each sector and sub-sector. Greed by mall owners can be tempered by the existence of competing malls, both local and foreign. Greed by local physicians can be tempered by the competition of foreign physicians, and so on. Our problem is that we have a Constitution plus local laws that outlaw foreign competition, and so the greed by locals cannot be tempered by other potential players.

A Filipino friend in the US, Emmanuel Tabones, made his own observations too. He gave me permission to quote him.

1. Class envy and resentment remain big problems in the Philippines. Personally, I am not jealous of anyone's financial success, kahit kung sino. Why should I care if Henry Sy has multiple homes? That's not an example of corporate greed. That's merely his right to spend lawfully earned money as he sees fit...Anyhow, I am doubtful Walmart, Target, Costco, or any big foreign retail chains will choose to compete in the Philippine market because its simply not lucrative, and there's too much corruption.

2. There should be a cap on class envy and resentment....Make it as close to zero as possible. In the Bible, there are two important commandments that people often ignore: the 7th Commandment-Thou shalt not Steal, and the 10th Commandment-Thou shalt not Covet Thy Neighbor's Goods. Any attempt to redistribute other people's possessions/property without their voluntary consent represents a gross violation, even if its done through political means or what is known as legal plunder.

3. If people really love their God and neighbor, why do they have a problem with other people's success?  While loving wealth is idolatrous, possessing wealth is not. If I am rich and successful due to my talents and hard work and I achieve great wealth as a result, would they accuse me of being greedy? If I play the lottery and I aspire to win $100,000,000, would you label me a greedy person?

4. They make up a false definition of greed. Even many in the religious community are not required to take a vow of poverty....Why is that so? Remember that there are many who possess far greater wealth than Henry Sy, and many are exceedingly generous with their money, often donating millions, or even billions in USD to various causes. Greed comes in many forms. It is not just about money....Some people are willing to trade wealth for power and influence.

I added that the Bill and Melinda Gates Foundation (BMGF) gives away $4B a year on average, perhaps in perpetuity, for health charity alone. If Bill Gates' money was confiscated early on by the US government due to envy or simply because it's a "sin" to amass too much wealth, that foundation's money and global health initiative would not have been possible.

On labor contractualization, a practice where SM malls are known for, I know one guy who hates contractualization a lot. He promises that if he becomes rich, he will give his workers minimum wage of P700 per day ++ various benefits (SSS, PhilHealth, Pag-IBIG, 14th month pay, HMO, etc.). Problem is that he will do it 10 or 20 years from now, if ever he becomes rich.

One of my friends here, a cancer patient, is undergoing chemo treatment -- in Singapore. She goes there monthly though she lives in Manila. Why? Because her mom, also a Pinay, is disappointed with many Filipino doctors. She asks too many questions, and many if not all of the Filipino specialists that she encountered are not ready or tolerant enough to answer all her questions. In Singapore, the mom reasoned out, the physicians  are very professional. Each nitty gritty detail can be explained patiently by the doctors there, so they endure the high cost of travel + treatment, but at least they are satisfied with the healthcare delivery.

Why did I bring up this story? Similar to local mall oligopolists and monopolists. The practice of medicine -- and law, accounting, dentistry, engineering, geology, pharmacy, etc. etc., is reserved only to Filipinos. So the locals may tend to be complacent or worse, mediocre. There is not enough competition in certain medical fields or specialization, especially for the high end patients and clients.

Then Emmanuel added the following points:

5. Mark Zuckerberg, the founder of Facebook, is a multi-billionaire and richer than Henry Sy. Do people  believe that the creation of Facebook was a manifestation of greed by Zuckerberg? If so, then they shouldn't be using his product for they are contributing to his "sin."

6. Google founders, Larry Page, Sergy Brin, and Eric Schmidt are all multi-billionaires as well, so by the earlier definition, they must be "greedy" then. Perhaps people should avoid using Google products, and also not patronize any major corporate entity because they are controlled by wealthy business people. Otherwise, they can be accused of hypocrisy if they accuse them of "greed," and yet, they "assist" them in committing "sin."

7. One is facilitating the "greed" of these multi-billionaires by using their products, thereby enriching their wallets....That constitutes sheer hypocrisy then....According to that kind of thinking, these cannot be "neutral" because they are the products of "greed" which can only contribute to more "sinfulness." One cannot escape the contradictions of faulty ideology.....If one truly does not value material wealth, then he should not criticize Henry Sy merely for having great wealth....After all, it has no value to him. Otherwise, I challenge him to criticize Mark Zuckerberg for being "greedy," even though he uses fbproduct, freely....And the founders of Google as well.

8. I'm not necessarily defending those who single-mindedly dedicate their lives to "amassing wealth," but the same can be said about people who "dedicate" their lives to other concerns only and ignore their spiritual obligations. So many "ordinary" people are like that, but you choose to single-out only the "wealthy." Need I remind you of Luke 6:37: "Do not judge, and you will not be judged. Do not condemn, and you will not be condemned. Forgive, and you will be forgiven.

As for me, I'm generally a mall boycotter. Not for any ideological reason or anti-monopoly reason, I just don't like going to the malls. Here's a nice quote I got from Larry Reed's fb wall: