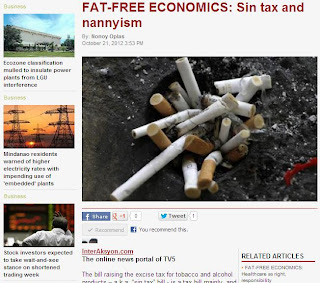 The bill raising the excise tax for tobacco and alcohol products – a.k.a. “sin tax” bill - is a tax bill mainly, and a health bill only second. It is a tax bill because its main goal is to raise revenue for the government, from a minimum target of P20 billion on year one alone, to a maximum target of P60 billion.


It is also a health bill because its second purpose is to discourage more people from smoking and drinking more by raising the price of cigarettes and alcoholic products. Various studies cited by physicians and health groups who supported the tax hike bill show that many debilitating diseases that affect millions of Filipinos each year are directly or indirectly related to smoking. Hence, less smoking, less diseases. And that makes the bill plausible and worthy of public support. This writer is among the many supporters of the tax hike for these products.

Certain sectors though go far beyond and suggest that the tax hike should be as high as possible while some suggest that cigarettes should simply be banned and prohibited, and government should not expect revenues from this “sin” and unhealthy product.

And that is how governments become more interventionist because many people themselves are interventionists. They have a particular worldview or opinion on how the rest of humanity should behave and run their own lives, so they concoct or devise various forms of regulations, restrictions and prohibitions. There is intolerance, explicit or implicit, in the diversity and spontaneity of the lifestyle of other people, so the “solution” is to invite and impose new regulations and restrictions by government so that the specific worldview as advanced will hopefully be realized.

And so while this writer is in favor of raising the excise tax on tobacco and alcohol products, preferably with just one rate and not two or three, the public should also recognize that people own their bodies, not the government or physicians or media or anybody else. Thus, even if government will raise the price of cigarettes to P500 per pack, people who want to smoke will always find a way to smoke, like usingnga-nga, buy smuggled cigarettes, make their own cigarettes or sell low-keykarinderia type, and so on.

And this brings us to three issues.

First, banning and prohibiting the consumption of cigarettes is wrong and unenforceable. There are many services that are currently banned by the government now, like prostitution, dangerous drugs, jueteng and other forms of gambling. And the result is more corruption in government as all these services and goods are available in many places in the country. Government officials simply allowed these in exchange for huge bribe money.

Second, using taxpayers’ money to subsidize the healthcare of people who deliberately abuse their body is wrong and economically distortionary.  If many people will over-smoke, -drink, -eat, or -sit,  and they become sickly later on, the rest of society should not be penalized by taxing them more, or denying the tax cut proposal. If those guys can buy lots of cigarettes and/or beer/alcoholic products, fatty food and drinks, and can afford to be couch potatoes, then it is assumed that they also have some resources to buy private health insurance to augment their Philhealth membership benefits.

Third, potential revenues from the excise tax hike should be delinked from funding universal health care. The new tax revenues should instead be used to reduce the public debt, or reduce the programmed annual borrowings. Any savings in interest payment can be used to expand the funding for UHC. For 2013, for instance, interest payment is projected at P334 billion, up from P317 billion this year. If such spending can be reduced to, say P300 billion, the P34 billion savings in one year can be used for UHC and other social programs.

Reducing the public debt and the high interest payment is possibly the single biggest anti-poverty program that the government can do. To achieve this, raising the sin tax is one measure, privatizing some government corporations like Pagcor is another, and cutting the budget of certain agencies is another measure.

Of the three issues mentioned above, only the last two are problematic due to the nanny-state thinking in many sectors in the country. The first issue is not getting wide public support and this is a piece of good news.
The second issue in particular is tricky. A friend asked (a) if sin taxes are issue of civil liberties, (b) if every adult citizen should have an unabridged right to smoke cigarettes and drink alcoholic products, and (c) whether we should valorize individual freedom above all other values.

For this writer, the quick answer to the three questions is, yes. If people will say no - that government has the right to curtail an individual’s itch to smoke and drink as much as he wants, say inside his own house and not disturbing the neighbors - then they are implying that the state has jurisdiction and even ownership of a person’s body.

People should recognize that they do not own other people’s bodies. Let other people do what they want with their body. Since there are potentially adverse health outcomes, then let the people get private health insurance from various service providers -- NGOs, corporations, local governments, others. This is on top of the state-run Philhealth system.

This way, the “negative externality” of people’s unhealthy or risky lifestyle will be internalized solely by them, and the rest of us will be spared more taxes and fees to finance more public healthcare spending.

There is a limit to nannyism. As the world modernizes further, people’s lifestyles will continue to evolve. People should learn to be more tolerant of other people’s lifestyle evolution and modernization. And they should learn to protect their turf by opposing government moves to further socialize and collectivize their incomes and savings, purportedly to expand healthcare for others, including those who deliberately abuse their own body.