We need patents and other intellectual property rights (IPR) to encourage innovation in medicines and  diagnostics. We need to link academic research with industry players and manufacturers to share the risks and rewards of innovation, to transfer technology from the academe to the consumers and patients. We need government political will to succeed in strengthening academic and industry research and development.

These are among the key messages shared by Dr. Reynaldo Garcia in his talk at the 9th Science, Technology, Innovation, Knowledge and Entrepreneurship (STIKE) Kapihan Series on the subject, Technology Transfer and Healthcare last September 27, 2012, at the Asian Institute of Management (AIM). The event was organized by the Dr. Stephen Zuellig Center for Asian Business Transformation. There were many participants who came, mostly from the Food and Drug Administration (FDA), DOH and AIM faculty members. 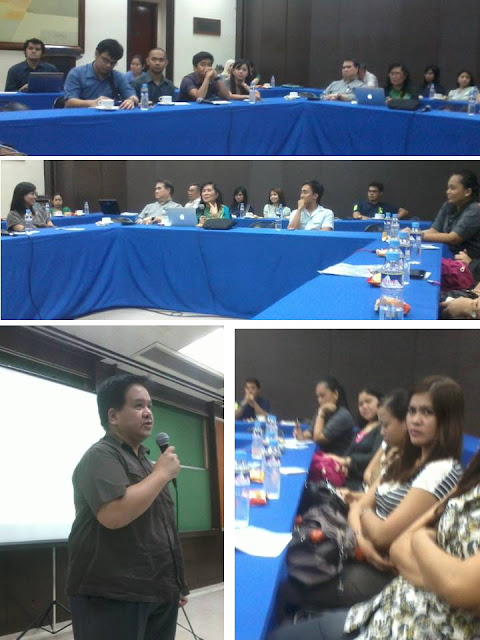 Dr, Garcia, above photo speaking, is a cool guy, a life scientist and a manager of technology and innovation at the same time. He is currently the Director of the Technology Transfer and Business Development Office of the University of the Philippines (UP) System and a Full Professor at the National Institute of Molecular Biology and Biotechnology in UP Diliman. He got his PhD in Molecular Biology at the Australian National University (ANU) and his business degree (Master’s in Bioscience Enterprise) at Judge Business School and the Institute of Biotechnology of the University of Cambridge in England, in collaboration with the Massachusetts Institute of Technology’s Sloan School of Management. Very bright guy, also very articulate and eloquent speaker.

Below are portions of his presentation that day. See the role of patents and other IPRs in protecting innovation. 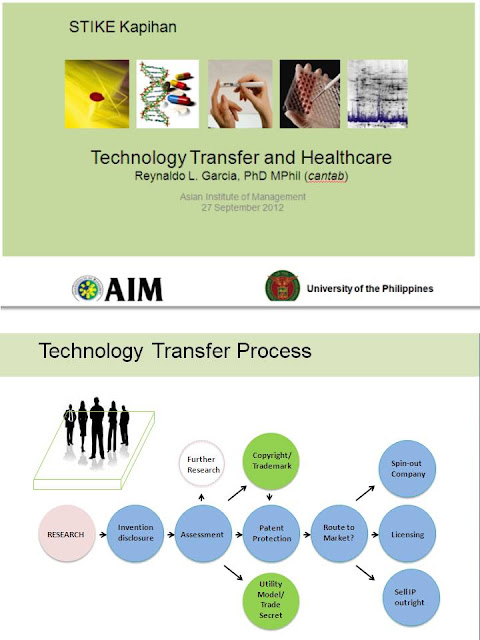 From universities to markets and patients. This is a key message that Dr. Garcia said he keeps repeating even to UP natural scientists. There is a tendency among UP and other local scientists, even those who were trained abroad for their graduate and doctorate studies, to be suspicious and skeptical of the pharmaceuticals, IT and other sector (local and multinationals) players and manufacturers. So they do not share their academic research work and keep many of such to themselves and their academic departments. If ever they wish to share, they themselves want to develop and market their own invention, something that Dr. Garcia said is definitely not practical and viable. And rightly so. 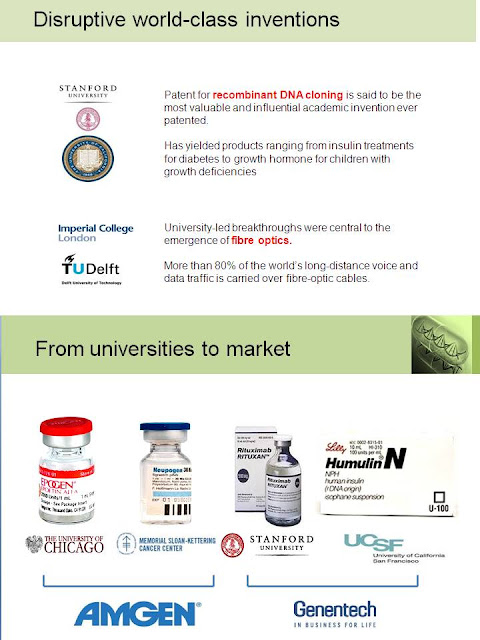 When academic researchers and institutes partner with commercial players, they share the risks as not all inventions will become commercially viable and profitable. It takes between $800 million to $1.2 billion to invent, develop and market just one medicine, he said, and even that is not assured of 100 percent profitability. When an invention is successful and profitable, the academic researchers and industry players also share the rewards, the former get royalties that can be huge even if they did not participate in the manufacturing and global marketing and selling components of the invention.

Proper division of labor among academic inventors and basic science researchers, technology managers, research companies with manufacturing facilities, multinational companies with global presence and marketing network. This remains the dominant and working model in many product inventions around the world. 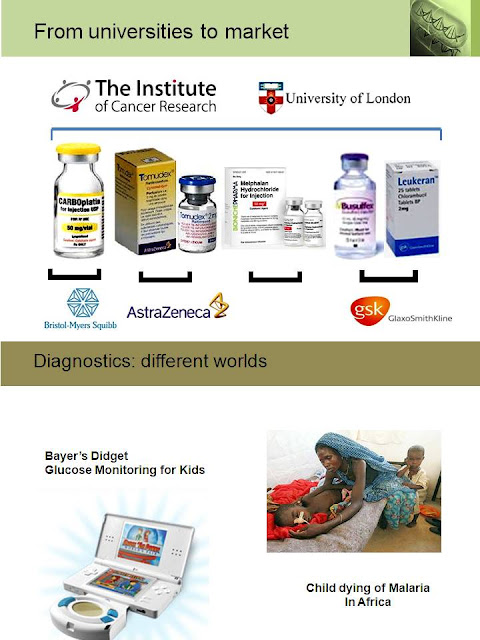 Dr. Garcia then discussed the gap between the developed and developing world in healthcare, especially in dealing with infectious diseases that are rare or non-existent in rich countries, like TB, malaria, dengue and African sleeping sickness.  Above, an example in diagnostics "divide".

Then he talked about neglected diseases in poorer countries.

I am a bit skeptical of the term "neglected diseases". Who neglected what? The big pharma multinational companies that are based and HQ'd in the US, Europe and Japan? The local pharma companies based in the poor countries? The academic research institutes, especially in poor countries? 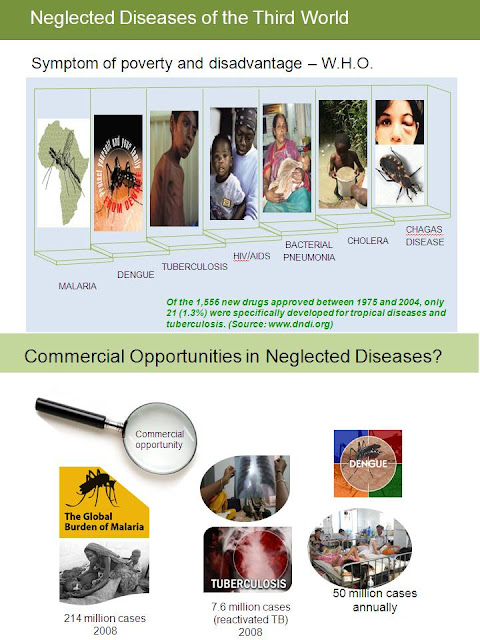 In the information and telecomm technology, in food and drinks manufacturing, in cars and other vehicles manufacturing, in many other sectors, any "neglected" invention and production is often temporary and short-term. The new products would soon be introduced in both rich and poor countries. But there is a huge institution that dictates what products from where or what countries at what price, can be brought in. And that is government and the business interests of the high politicians in those countries.

On medicines, there is also that mental baggage and misconception among certain academics, politicians, media and NGO leaders, who believe that patents and IPRs are evil and hence, should be abolished.  Dr. Garcia narrated that he once debated with some UP academics who argued that all research output and inventions made in state universities like UP should not be patented or copyrighted, and be made freely available to the public, rich and poor alike. It's good that Dr. Garcia is able to convince those guys, or at least the audience, the value of new inventions to be patented or copyrighted.

This mental baggage could be one reason why many local pharma companies in the developing world never jumped into the drug innovation business. Not only that it is a high risk, high cost endeavor, but also many people would later call or demonize them as "blood thirsty capitalists who suck more money from poor patients in the Third World."

I have argued in the past and argue it again, that IPRs are made to protect bright and excellent ideas which are likely to be copied with little or zero benefit to the bright minds that invented them. And it is not free, it is not cheap, to develop bright minds. Mediocre or even idiotic or crackpot ideas do not need protection as few or no one would bother to copy and much less, develop and manufacture those mediocre "inventions". Moronic ideas can easily be duplicated thousand times with no meaningful changes to be expected. 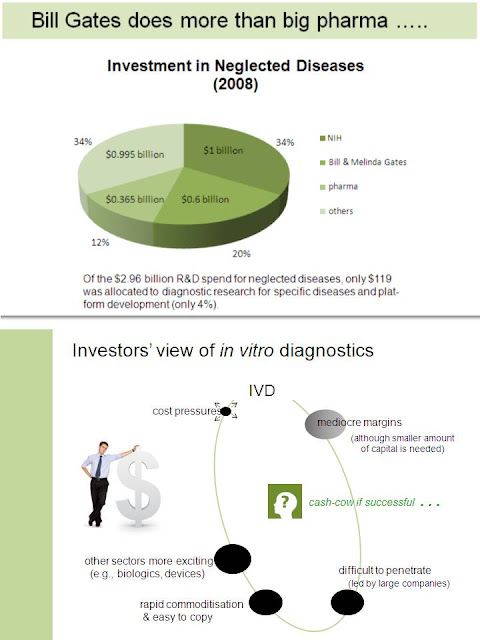 Dr. Garcia noted that "Diagnostics is less than 1/10 (ca. 6%) the size of the pharmaceutical sector... According to the World Health Organization, while diagnostic tests provide the basis for roughly 2/3 of all medical decisions, only 1 percent of the global healthcare expenditure of $2,500 billion is spent on diagnostic services." 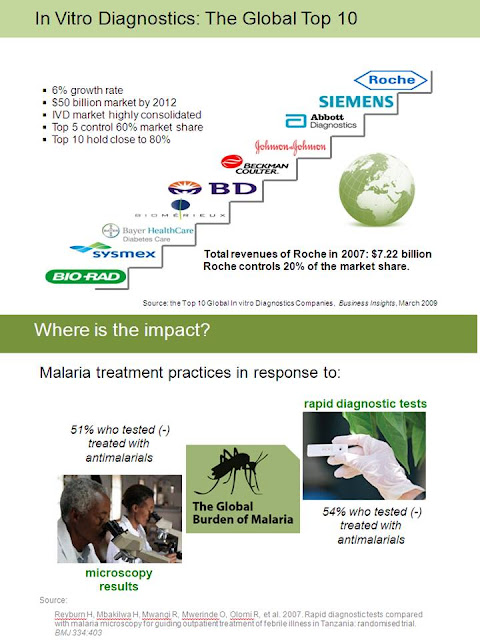 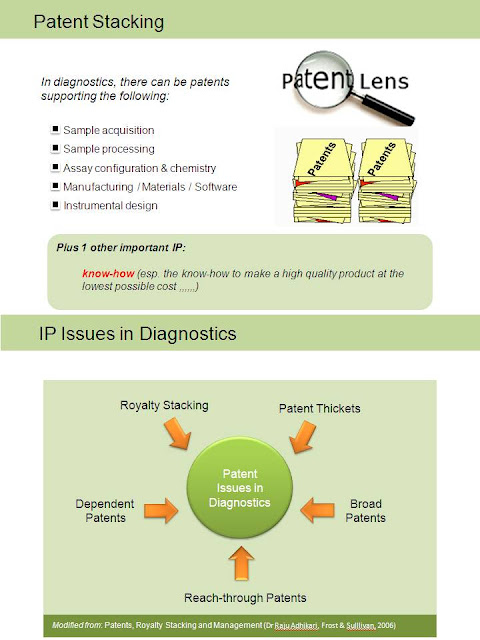 There is a need to project or think about IPRs early, he said, because

Technology developed with support from government funding may not be immediately ready for commercialization. A technology developed to the point of patentability might require further investments in R&D before it can be marketable. The research institute or its personnel with important IP assets may not necessarily possess the complementary commercial skills or market presence required to bring their products to market. IPR can provide the RDI/its inventors a negotiating tool with which to license or sell an invention to other firms better positioned to commercialize it. 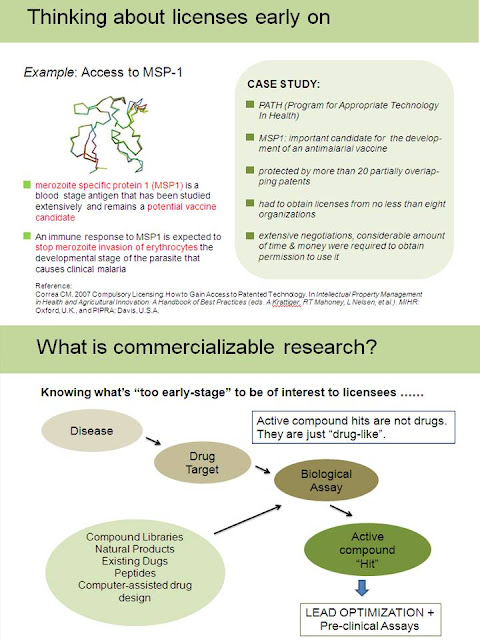 There are several factors to consider whether to commercialize or not, an invention, according to Dr. Garcia. Among these: Is there an unmet need? Is there innovativeness and commercial potential? Is there freedom to operate, no copy catting that can lead to patent lawsuits later? Should do it alone or partner? Exit strategy and return on investment?

Towards the latter part of his presentation, he discussed the case of Cuba. Will tackle it in my next discussion here. But suffice it to say that even a socialist economy like Cuba that is supposed to own socially (ie, via the state) all major means of production like factories, hospitals and drug inventions, believe in IPR protection. Since 1981, Cuba has more than 1,200 patents on several dozen medicine products.

What appears like a "new left" argument of abolishing or disrespecting IPRs and treating all ideas as the same and equally "useful" is wrong. Sufficient property rights protection should be given to bright ideas and inventions while mediocre ideas and "inventions" would not need such similar protection as very few or nobody would bother copying them.

{* Thanks to the Dr. Stephen Zuellig staff at AIM for inviting me, and to Jayson Soriano in particular for sending me Dr. Garcia's presentation.}
------------