* This is my article today in the online magazine,
http://thelobbyist.biz/index.php/perspectives/less-government/item/116-the-new-poor-free-poor-and-populism
------------- 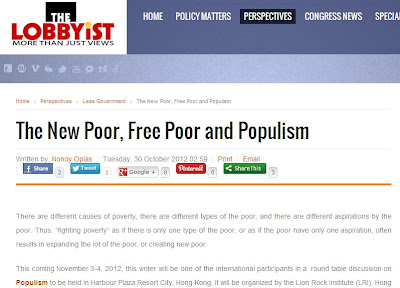 
This coming November 3-4, 2012, this writer will be one of the international participants in a  round table discussion on Populism to be held in Harbour Plaza Resort City, Hong Kong. It will be organized by the Lion Rock Institute (LRI), Hong Kong’s first and only free market think tank. There are several thick reading materials that participants must read before attending the round table. Among them is the book The True Believer (NY, Harper and Row, 1951; HarperCollins e-books, 2010) by Eric Hoffer (1902-1983), an American self-educated writer who has published 10 books.
The book discusses the true believer, “the man of fanatical faith who is ready to sacrifice his life for a holy cause”, of certain mass movements, whether religious, cultural or political movements and revolutions. In the early chapters, Hoffer discussed about the five different types of the poor and how they can or cannot be enamored by mass movements. All definitions are directly lifted from his book:
1. The New Poor
Not all who are poor are frustrated. Some of the poor stagnating in the slums of the cities are smug in their decay… It is usually those whose poverty is relatively recent, the “new poor,” who throb with the ferment of frustration. The memory of better things is as fire in their veins. They are the disinherited and dispossessed who respond to every rising mass movement.
In Germany and Italy the new poor coming from a ruined middle class formed the chief support of the Nazi and Fascist revolutions. The potential revolutionaries in present-day England are not the workers but the disinherited civil servants and businessmen.
2. The Abjectly Poor
The poor on the borderline of starvation live purposeful lives…The goals are concrete and immediate. Every meal is a fulfillment; to go to sleep on a full stomach is a triumph; and every windfall a miracle. What need could they have for “an inspiring super-individual goal which would give meaning and dignity to their lives?” They are immune to the appeal of a mass movement.
Misery does not automatically generate discontent, nor is the intensity of discontent directly proportionate to the degree of misery.  Discontent is likely to be highest when misery is bearable; when conditions have so improved that an ideal state seems almost within reach.
3. The Free Poor
Unless a man has the talents to make something of himself, freedom is an irksome burden. Of what avail is freedom to choose if the self be ineffectual? We join a mass movement to escape individual responsibility, or, in the words of the ardent young Nazi, “to be free from freedom.”
Those who see their lives as spoiled and wasted crave equality and fraternity more than they do freedom. If they clamor for freedom, it is but freedom to establish equality and uniformity. The passion for equality is partly a passion for anonymity: to be one thread of the many which make up a tunic; one thread not distinguishable from the others.No one can then point us out, measure us against others and expose our inferiority.
Where freedom is real, equality is the passion of the masses. Where equality is real, freedom is the passion of a small minority. Equality without freedom creates a more stable social pattern than freedom without equality.
4. The Creative Poor
Poverty when coupled with creativeness is usually free of frustration. This is true of the poor artisan skilled in his trade and of the poor writer, artist and scientist in the full possession of creative powers. Nothing so bolsters our self-confidence and reconciles us with ourselves as the continuous ability to create; to see things grow and develop under our hand, day in, day out.
With a fading of the individual’s creative powers there appears a pronounced inclination toward joining a mass movement. Here the connection between the escape from an ineffectual self and a responsiveness to mass movements is very clear.
5. The Unified Poor
The poor who are members of a compact group—a tribe, a closely knit family, a compact racial or religious group—are relatively free of frustration and hence almost immune to the appeal of a proselytizing mass movement. The less a person sees himself as an autonomous individual capable of shaping his own course and solely responsible for his station in life, the less likely is he to see his poverty as evidence of his own inferiority. A member of a compact group has a higher “revolting point” than an autonomous individual. It requires more misery and personal humiliation to goad him to revolt. The cause of revolution in a totalitarian society is usually a weakening of the totalitarian framework rather than resentment against oppression and distress.
Hoffer’s discussion of the Free Poor is particularly striking. The wide and populist demand for various government welfare programs for instance, whether by the administration in power or by traditional opposition parties or by rebel groups, is a move towards instituting forced equality in society. And many poor people and non-poor ideologues and lobbyists like the various consultants on “fighting poverty” programs go along with this tide.
The LRI event will be followed by the Economic Freedom Network (EFN) Asia Conference, to be held in Crowne Plaza Hong Kong Kowloon East Hotel, November 5-7, 2012. The theme,  How Welfare Populism Destroys Prosperity, is very timely with what is going on in Europe, North America and many Asian economies. This big conference will be sponsored by the Friedrich Naumann Foundation for Liberty (FNF) and co-sponsored by LRI. This writer will attend as one of the workshop panel moderators.
The big danger of populism and welfarism is to homogenize and standardize people, to reduce diversity among them and limit people’s spontaneity and innovation and in the process, to drastically restrict individual freedom. Each successful innovation and creativity by individuals as a result of a free society will result in more inequality among the people, something which is looked down upon by the politics of envy.
---------------