I attended this lecture this week, October 23, at the AIM. The five lady speakers all have good if not outstanding academic credentials. When I received the email invite from the organizers two weeks before the event, I asked them if they also have a forum that will debate, not sing alleluiah, over this anthropogenic (or "man-caused" or "man-made") global warming (AGW) and climate change (CC). I added that it is a huge scam, a scheme towards global ecological central planning. And whether there is less rain or more rain, less snow or more snow, less storms or more typhoons, less dogs or more dogs, they are all proof of AGW/CC. The proponents and campaigners of this claim, led by the UN and Al Gore, are simply intellectually dishonest and rent-seeking. 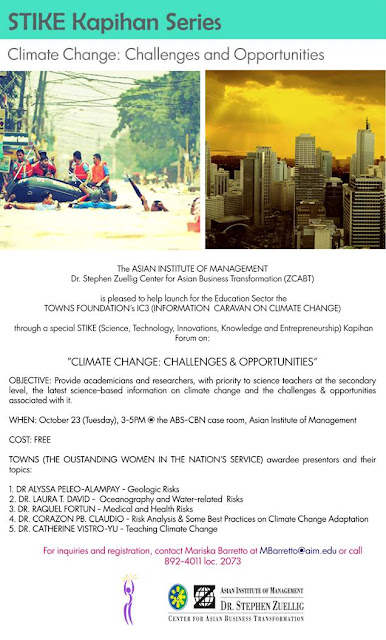 Dr. Alyssa Alampay got her PhD (Earth Sciences) from Scripps Institute of Oceanography, University of California, and is currently teaching at the UP National Institute of Geological Sciences (NIGS).

Dr. Laura David got her PhD (Physical Oceanography) also from the University of California, and currently teaching at the UP Marine Science Institute (MSI).

Dr. Raquel Fortun got her MD and now teaching at the UP College of Medicine, Department of Pathology. She is well known in Forensics science, consultant for criminal cases.

Dr. Corazon Claudio got her MS and PhD (Engineering-Econ Systems/Management Science and Engineering) from Stanford University. Currently President of the EARTH Institute.

Dr. Catherine Yu got her Ed. D. (Math Education) from the University of Georgia. TOWNS President, she is teaching at the Math Department, Ateneo de Manila University.

I like the presentation made by Dr. Alampay, lots of good photos, graphics, of global and Philippine geological situation. She slightly mentioned about "effects of global warming?" in question mark rather than in affirmative and direct statement. Dr. David was more emphatic about "rising sea level", "threatened coastal villages" due to global warming and CC.

During the open forum, I was the first to raise my hand (as usual) and argued that while global warming was true, it did happen, global cooling is also true, it did happen and is happening now. And that climate change is true, warming-cooling-warming-cooling in endless, natural cycles. So the problem in CC discussions is that it is heavily corrupted to focus only that it is "man-made" and not caused by many other natural factors.

I asked specifically Dr. Alampay, if there are clear peer reviewed papers that explicitly and categorically ruled out, natural factors as drivers of the Earth's climate -- the Sun, galactic cosmic rays (GCRs), water vapor, clouds, volcanoes. Because in the IPCC AR4 released in November 2007, out of the eight (or nine) factors that contributed to the past century's warming, only one factor, the Sun, was included and all the other seven (or eight) factors are anthropogenic. And the IPCC data showed that solar forcing was minimal, something like 0.12 watts/sq.m. vs. anthropogenic forcing of about 0.3+ W/sq.m.

Dr. Alampay expressed joy that I raised those points, that compared to global temperature over the past 65 million years ago, we are in a period of global cooling actually. And there were periods in the past that were warmer. But what the IPCC pointed out was the timing of recent warming to the spike of CO2 emission when the Industrial Revolution started in the mid 1800s.

I made a follow up comment (thanks to the moderator, David) and argued that the past century's warming was not so bad, only about 0.7 C of warming, and before that, there was a Little Ice Age (LIA) where global temperatures were low, and before the LIA, there was the medieval warm period (MWP) that lasted for about 600 years and global temperatures were warmer than the past century's warming. The UK Meteorological Office also admitted in the past week or two, that global temperatures (northern + southern hemispheres + tropics) have tanked or flat-lined over the past 16 years, 1996-2012. And if you look at global temperatures in (a) air and lower troposphere, satellite data as interpreted and plotted by the University of Alabama in Huntsville (UAH) and the Remote Sensing System (RSS), (b) land surface, (c) sea surface, (d) Arctic and (e) Antarctica temperature anomalies, all those five areas have shown up-down-up-down in temperature anomaly (deviation from the average). It's a non-issue, no big deal temperature changes. But the UN, Al Gore, environmentalists like Greenpeace and WWF have made it a big issue. So that various environmental regulations, carbon and energy taxation, huge climate bureaucracies, climate global junkets, etc. can be justified.

I stayed a bit more to see if there are any WWF or Greenpeace planet saviors in the room who would stand up and defend their climate alarmism campaign, there was none. I had to leave to do other work and did not stay for the merienda/light reception after the forum. 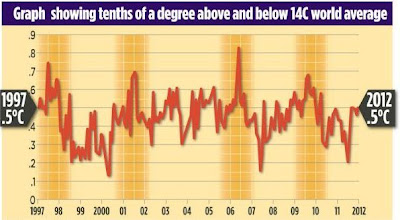 Clive Best made an analysis about the above graph in a guest post in WUWT here,
Met Office Statistics Questioned.

The UK Met sent him some vague answer to his questions, so he made his own graphs charts from the HadCRU data and produced these two images and analysis, below: 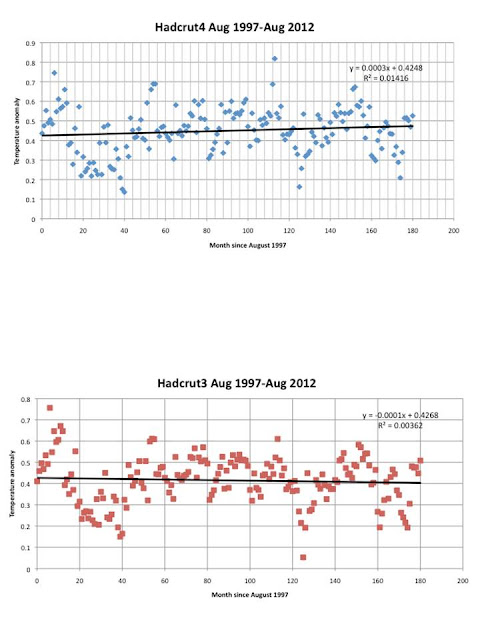 "The result gives a trend  of 0.03  ± 0.02 °C, where the error is one standard deviation (~60% confidence) – so essentially flat.  Notice also  that the  correlation factor R of the data with a linear trend is anyway very poor – just 0.12, demonstrating just how large the non-random monthly variations exist in the data. I am now convinced that  the trend is statistically consistent with zero. To emphasize this point, I now show  exactly the same analysis done for HADCRUT3 which up to a few months ago was  the flagship  IPCC data as used in  AR4.

"The result is a “cooling” trend of -0.016 ± 0.02 °C. To state that the world has “cooled” over the last 16 years is just as meaningless as  for the MET Office to claim it has  ”warmed”. The only rational  scientific statement that can be made is that global temperatures have not significantly changed since August 1997. The MET Office should just  acknowledge this fact and thereby  maintain  their scientific integrity." 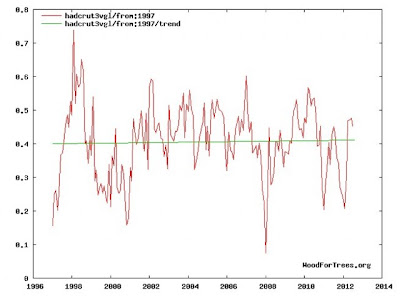 the UK MET is asking the same question i am.

" As we’ve stressed before, choosing a starting or end point on short-term scales can be very misleading. Climate change can only be detected from multi-decadal timescales due to the inherent variability in the climate system. If you use a longer period from HadCRUT4 the trend looks very different. For example, 1979 to 2011 shows 0.16°C/decade (or 0.15°C/decade in the NCDC dataset, 0.16°C/decade in GISS). Looking at successive decades over this period, each decade was warmer than the previous – so the 1990s were warmer than the 1980s, and the 2000s were warmer than both. Eight of the top ten warmest years have occurred in the last decade."

The warming fanatics say, "more CO2 emission, more warming." Have to compare that statement with the most recent data.

you should write about these fanatics. who are they. what do they say? their websites? papers?